Learn MoreAboutContactsubmissionsStore
Thank you! Your submission has been received!
Oops! Something went wrong while submitting the form
© Copyright 2009-2019 INHERITANCE media. All rights reserved.
INHERITANCE media is a non-profit organization (Tax Id: 46-1132576)
ISSN 2380-324X (print) | ISSN 2380-3266 (online)
Online
Asian American Liberation Theology
A Past We Never Knew Was Ours
By Wong Tian An
in
Church
Jun 06, 2019 | 6 min read 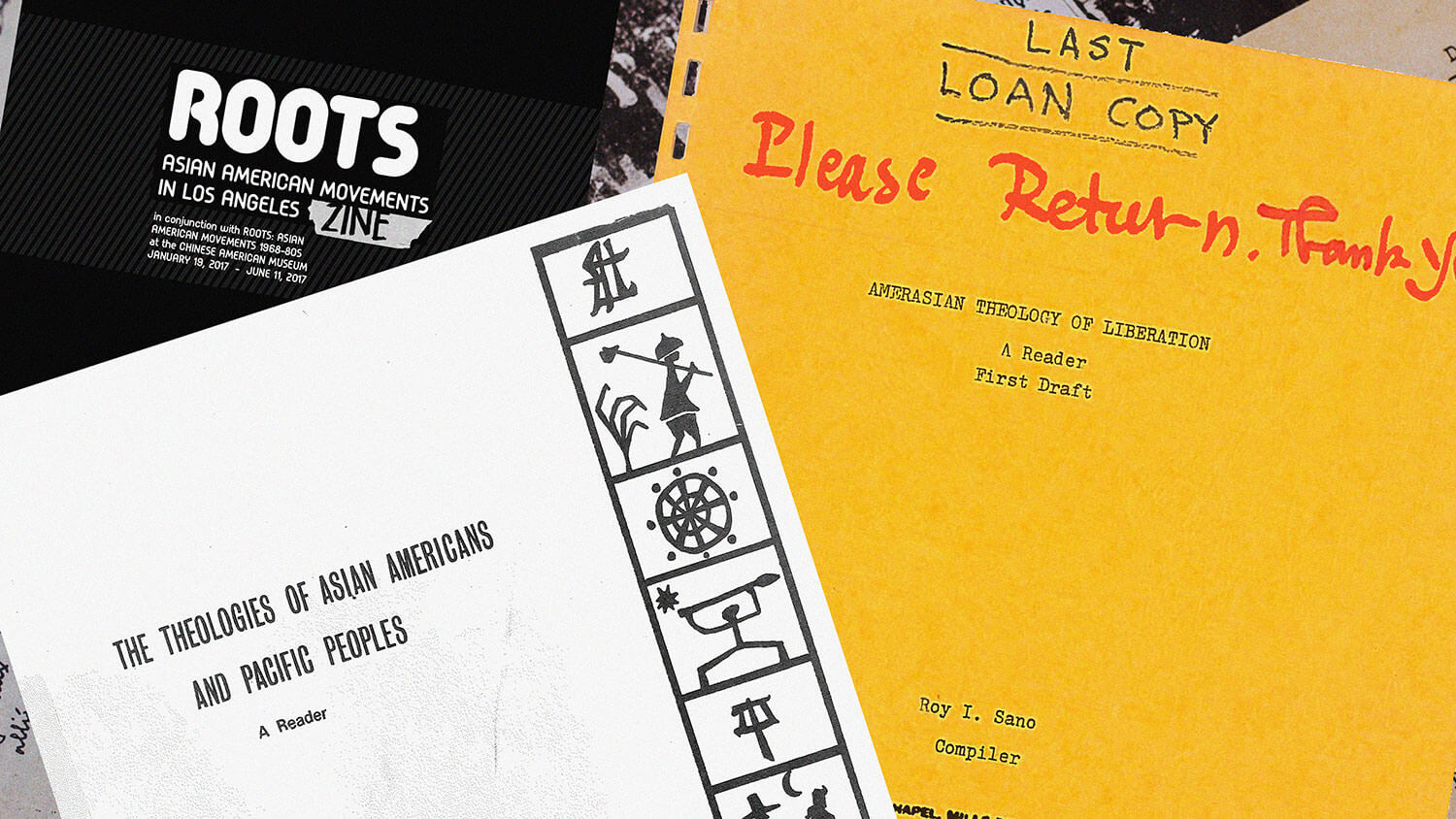 A few months ago, I became Asian American. Demographically speaking, that is. I received a green card to Trump’s U.S. From Malaysia, I landed at JFK airport in New York City in late 2018, having left it when it was Obama’s U.S. in 2016. Back then, you needed finer theoretical tools like postcolonialism to pull back the curtain on U.S. empire and critical race theory to pick apart layers of oppression. Today, all bets are off — we’re faced with blatant white supremacy, anti-refugee sentiment, disasters of climate change, and the spectre of China. These problems are so basic and yet so trenchant that schoolchildren have had to be the ones to march for our lives and strike for the planet.

I’ve been having a hard time going to church lately. I hate to sit in the pews where no mention is made of the latest shooting or #ChurchToo revelation or climate disaster. I scribble silently and furiously in the church bulletin all the things that should have been proclaimed from the pulpit. Things are not all right. Things are not okay. Action must be taken. But in the churches I have tried to attend lately, one would think that nothing has changed. Has nothing changed? Is not the ground shifting beneath our feet? Ten years ago, the global economy collapsed. Today, white supremacy is having its day. In the next 10 years, climate change will be wreaking unprecedented havoc.

White theology — and Asian American theology, inasmuch as it tries to approximate whiteness — is not up to the task.

White theology — and Asian American theology, inasmuch as it tries to approximate whiteness — is not up to the task. By theology here I do not mean just the academic work of professional theologians, I mean the “God-talk” that is done in day-to-day churches and over kitchen tables by lay people of color. White theology is no foundation on which the activism and action that are urgently needed can stand. To be sure, it never did in North America: the blood of Native Americans and African Americans run deep in church history. And since that decisive election in 2016, evangelicals of colour have been deeply alienated by the stubborn complicity of white evangelicalism, a phenomenon covered even by the New York Times and the New Yorker.

To claim Asian America, then, is a political consciousness.

But what is Asian America? In a haunting account of Michael Deng’s death by hazing at an Asian American fraternity, New York Times writer Jay Caspian Kang writes, “‘Asian-American’ is a mostly meaningless term ... Discrimination is what really binds Asian­Americans together.” Kang points to the 1960s when “Asian American” was claimed as a political identity, forging a unity through shared experiences of oppression and anti-Asian racism, inspired by the Black Power movement and the Third World revolutions. To claim Asian America, then, is a political consciousness. Or, in journalist Jeff Chang’s words, the '60s was “when the word ‘Asian American’ was not merely a demographic category, but a fight you were picking with the world”.

But what about Asian American liberation theology?

Asian American liberation theology differs from other liberation theologies in that the experience of mass incarceration, or internment, forced Japanese American Christians to develop a specific theology of suffering, one that could speak to their trauma.

What little historical remnant is left of this movement, I learned, is kept in the Graduate Theological Union archives at Berkeley. It holds a collection of 20 boxes produced by the Pacific and Asian American Center for Theology and Strategies (PACTS), which grew out of the need “to re-think faith and reorient ministries in the light of the emergence of ethnic consciousness in the late 1960s”. The online inventory gives a long list of unpublished written works by many Asian Americans, and reveals the immense theological activity during those years. For example, its first director Dr Roy Sano compiled two readers: "Amerasian Theology of Liberation" (1973) and "The Theologies of Asian Americans and Pacific Peoples" (1976), which New Testament Professor Seung Ai-Yang describes as “very much like one of today’s ‘readers’ used for a course in colleges and graduate schools. Its handwritten page numbers, ring-binding, and different typefaces for each article reveals the urgency and necessity Sano felt for this work at that time as a pioneer in this field”. Most of these works remain hidden in dusty archives, their existence known only to scholars and historians, and perhaps other seekers of liberative Asian American theological traditions.

As it turns out, copies of the 1976 reader can still be found in a handful of libraries across North America. When I was visiting Vancouver, it was to my fortune that the Vancouver School of Theology happened to have a copy. I eagerly brought it home, and as I flipped through its pages, reading titles such as “I know who I am”, “Oppression — White Domination”, “Why an Asian American theology of Liberation?” and “The Dilemma of One Asian Woman”, chills ran down my back. I could feel the weight of a lost history, the powerful activist theological energy of bygone era. This is it! If Asian Americans could point to the '60s to ground their activism, then Asian American Christians can also ground our theology here. Maybe, just maybe, Asian American liberation theology could be a place to call home.

What happened? Why do we have no collective memory of this?

The excitement abating, this led to a mystery: what happened? Why do we have no collective memory of this? I pulled up my sleeves again to dig deep. I came across Roy Sano’s contact information and reached out. Now a retired bishop in Oakland, Sano responded more quickly than I expected. In Sano’s view, the interests “shifted from liberation to identity perspectives of Asian Americans. I saw Asian American liberation theologies combine our identities shaped by cultural heritage and experience of racism with the quest for liberation from white racist domination”. If Asian American liberation theology is able to name “white racist domination”, then this just might be the foundation on which to build today’s movement.

Nonetheless, the theological output of later generations of Asian Americans reflects two major streams that flowed out of this historical Asian American liberation theology: theologies of inculturation that sought to build a Asian American theological identity through reflections on marginalisation, hybridity, and liminality — such as the works of Sang Hyun Lee, Andrew Park, and Peter Phan; and Asian American feminist theologies which drew upon social science theories such as postcolonialism and feminism to produce a distinctive theological voice and important critiques — such as by Wonhee Anne Joh, Grace Ji-Sun Kim, Nami Kim, and Christine Pae. The latter, especially, have in my view carried the fire of theological critique that speaks truth to power.

We have the shoulders of the past generation to stand upon. It is our inheritance, and it is ours to wield.

Still, more needs to be done. There is an urgency today that we did not have even five years ago. I grow more and more convinced that Asian American liberation theology is the right place to build our theological home and to ground our activism by. The crisis is already here, and we must bring the fight. To be certain, there were problems with the movements of the '60s, most notably its misogyny and heteronormativity, and Asian America is rightly recognized as far more diverse now than it was then. A self-critical update is obviously necessary. But this much is clear: we have the shoulders of the past generation to stand upon. It is our inheritance, and it is ours to wield.

In the second part, I will lay down some groundwork for an Asian American theology of liberation 2.0. In the meanwhile, I have digitized and am making available online the 1973 and 1976 readers, with permission from Roy Sano, a piece of history we never knew was ours. Enjoy!

By Wong Tian An