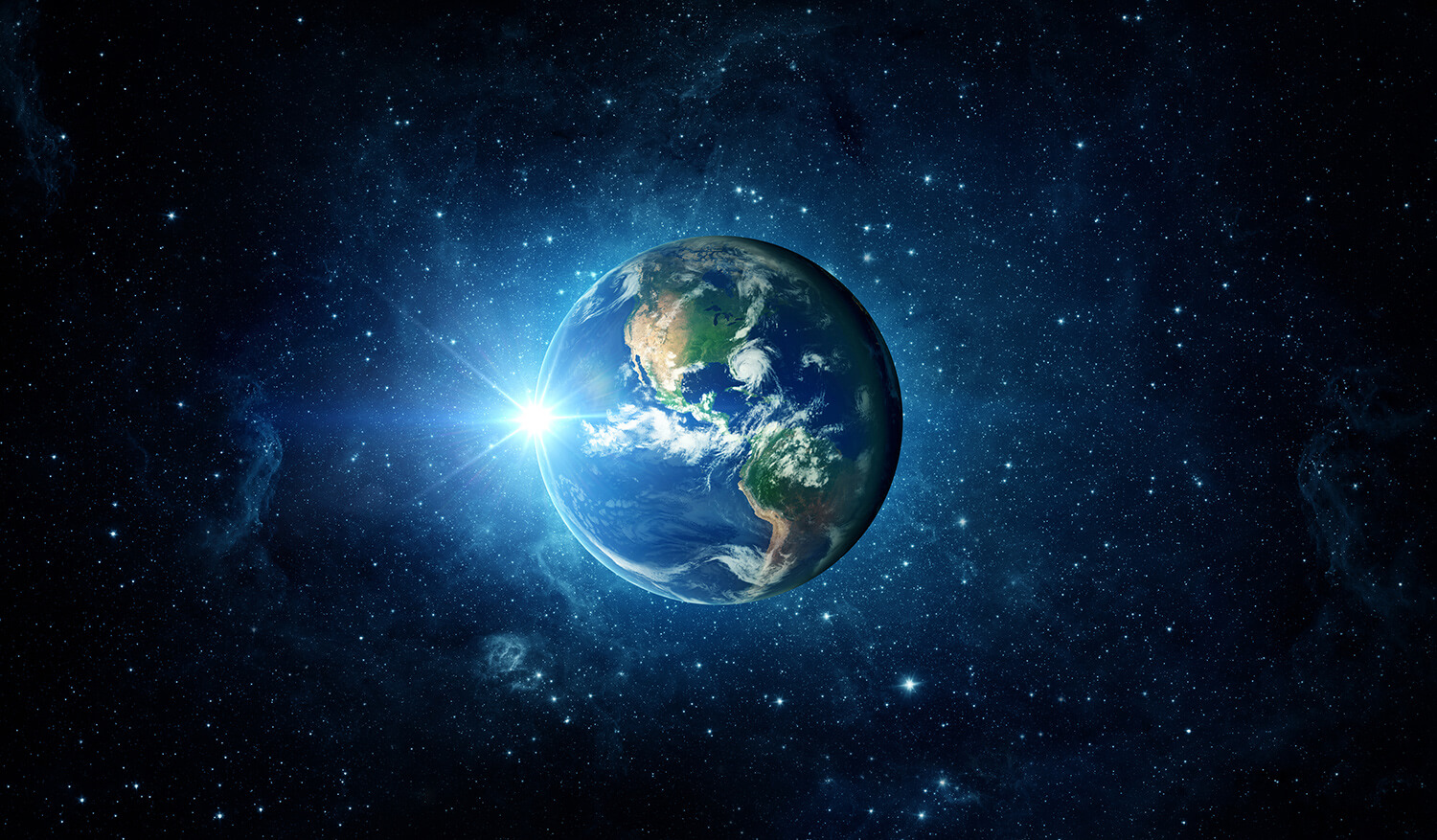 Our destination was the Creation Museum in Petersburg, Kentucky, 20 miles west of Cincinnati. Opened in 2007 amid protests and critical media coverage, the museum promotes a young Earth creationist interpretation of the book of Genesis: God created the universe in six 24-hour days, Adam literally materialized from dust, and the Earth is 6,000 years old.

“You’ll be transported back 6,000 years to the dawn of time as you begin your walk through biblical history,” read the museum’s webpage. Our destination, in a sense, as we hurtled down the concrete ribbon of the interstate, was the beginning of all things. Looking around, it felt like we were driving through the end.

It began with a postcard. Magnetized to the refrigerator next to library receipts, family photos, and doctor’s appointment reminders, the front of the postcard had an aerial image of a half-constructed concrete monolith. On the back was a handwritten message thanking my dad for his contribution to Answers in Genesis, the organization that operates the Creation Museum. My dad’s donation, the message read, would help build a life-sized recreation of Noah’s Ark next to the museum.

How does my dad have a terminal degree in a hard science, yet reject one of the fundamental presuppositions of his field?

My dad’s a lab technician at the Children’s Hospital of Philadelphia. He sequences DNA — to the naked eye it looks clear and gloopy, like mucus stored in a jar — the computer spitting out long strings of nucleotides. He has a bachelor’s and master’s degree in chemistry from Peking University, a PhD in biochemistry from the University of Oklahoma, and he believes evolution is a myth perpetuated by the secular, mainstream establishment.

The fact that all these things are true for him has always been a source of fascination for me. How does my dad have a terminal degree in a hard science, yet reject one of the fundamental presuppositions of his field? How does his education intersect with his religion? How does belief develop, calcify, and change?

So I told my dad: let’s go to the museum.

In the summer of 1989, my parents feared for their lives. They lived in Beijing a few miles east of Tiananmen Square, where the People’s Liberation Army, in the late and early hours of June 3rd and 4th, had violently “suppressed” pro-democracy protesters. The next morning, when my parents woke up, they saw burned out tanks on the side of the road. Soldiers patrolled Chang’an Avenue, the site of the famous “Tank Man” photograph, and ordered residents to stay indoors. My dad had been accepted to grad school in the U.S. but didn’t have a visa, and the Chinese government was wary of allowing citizens to leave the country after the massacre.

In August of that year, a telegram from the Ministry of Foreign Affairs informed him of the approval of his visa request. He bought a one-way ticket to America.

Young Earth creationism, after all, isn’t about science. It’s about good versus evil, God versus the enemy, us versus them; it’s about whose side you’re on.

The museum was not a museum, at least not in a traditional sense. There were display cases filled with artifacts, plaques explaining the artifacts’ significance, and flat-screen TVs playing Answers in Genesis-produced nature documentaries on loop — all the trappings of a traditional natural history museum with the attendant veneer of scientific legitimacy. But as a 2012 academic paper observed, the museum used the aesthetics of science museums to reject “the foundational premises underlying scientific argument that human beings can understand the natural world through careful observation and reasoning”. In other words, the museum adopted the appearance of scientific reasoning to undermine that very reasoning.

Young Earth creationism, after all, isn’t about science. It’s about good versus evil, God versus the enemy, us versus them; it’s about whose side you’re on. Several rooms in the Creation Museum warned of the consequences of evolutionary thinking. There was a dark, dingy recreation of an urban alleyway, dressed up with exposed wiring, broken windows, and lurid neon signs. Sounds of sirens and glass shattering came in over the sound system. “Modern World Abandons the Bible”, read the graffiti. Strewn across the alleyway were blurry, VHS-quality videos meant to elicit moral panic. “IN THIS 7 MIN. VIDEO,” said a plaque next to one of the videos, “The young boy in the background is ‘on a killing spree’ on his video game. His older brother is trying to entice him into looking at internet pornography and using illegal drugs” (emphasis in original). There was another room that basically drew a straight line from Darwinism to Nazism. Look, said the museum, at what evolution hath wrought.

My dad arrived in Oklahoma City at midnight. His wife had stayed in China, hoping to obtain a visa in the near future. “I was looking for someone who held up a sign with my name,” he said. “I was hoping someone was there. But there was no such thing.”

As he wandered the terminal, a kindly old white man approached him and asked if he was Zhili (I assumed he botched the pronunciation). My dad said he was; was he the man from the university? No, the man said, he was from the local church that had just launched a study group for Chinese students. (Later, my dad would learn that this man, Jim, combed through the University of Oklahoma’s attendance records every semester, looking for Chinese names he couldn’t pronounce.) Would he be interested in attending?

During the day, my dad went to his science classes; during the evenings, he read the Bible aloud, one or two hours at a time. It was the first book he read in English. On Sundays, he went to church. He had heard about evolution before and had kind of taken it for granted. “But when I first read the Bible, I was immediately concerned with whether evolution was true, or God’s creation was true,” he told me. “One of them has to be true, right? It cannot be both true, right?”

Four months after his feet touched American soil, after much reading and prayer, my dad came to the following conclusions: God is real, the Bible is God’s Word, Jesus is God’s son, and evolution is false.

“There’s nowhere in the Bible that says, ‘Believe that God made the world in 4,000 BC and thou shalt be saved,’” said David Wilcox, an Eastern University biology professor. Eastern is a private Christian school not far from where I grew up; I’d called him the week after we returned from Kentucky, seeking a perspective outside my family’s. “The Bible doesn’t say, ‘God did not control evolution.’ The Bible says that God created things.”

During his tenure at Eastern, Wilcox taught evolutionary biology to his students and found no contradiction between his faith and his work as a scientist. He attended Geneva College — also a private Christian school—in the 60’s as a pre-med major, going in with a creationist mindset almost by default. “I sort of had a sudden insight about ‘67 or ‘68, when I suddenly realized that I was ignoring the theological tradition I was brought up in,” he said. “I was ignoring the doctrine of providence, that God sovereignly controls all things.”

“It’s a matter of tribal instinct. It's a matter of belonging and being faithful to the people you belong to."

“And if God controls all things,” he continued, “then [God] controls all natural processes, and when I see something happening via a natural process, I’m not explaining how it happens without God, I’m explaining how God does it. And therefore, there is no possible natural explanation for something happening which by itself excludes the hand of God.”

We talked for over half an hour. I told Wilcox that sometimes I felt frustrated with my parents’ beliefs, that I avoided talking about certain things because I knew we wouldn’t get anywhere. “It’s very difficult when something is held as central to the family’s understanding of life, to find yourself in disagreement with them,” he told me. “I would bet that you’re feeling like you’re betraying your family a bit.”

You are born. You are baptized. You are loved.

You move from Oklahoma to Pennsylvania when you are two. Your parents find a church filled with people like them: Chinese immigrants with advanced degrees and well-maintained homes in suburban Philadelphia. You cannot remember a time when you did not go to church. The taste of the lunch they served after service still lingers in your mouth.

You get older. Every Sunday morning you sit in the backseat of the car next to your sister, rubbing the sleep out of your eyes. Your friends are people like you: children of Chinese immigrants (whose parents have advanced degrees) living in well-maintained homes in suburban Philadelphia. You attend youth group. You attend weekend retreats, learning about Jesus in the town of (no joke) Paradise, PA. You learn that your story is part of humanity’s larger story of creation, fall, and redemption. You try, very hard, to believe.

You get older. Every conversion story follows the same pattern: I thought I could do things by myself, I discovered the limits of my ability, I hit rock bottom, I found Jesus, I realized God’s divine power is infinitely greater than my tiny, weak, limited human will. It is a story of creation, fall, and redemption.

You get older. What does a de-conversion story look like? You graduate from high school, you attend the same college and Christian student group as your sister, you go to church every Sunday, you pray to God, you read the Bible, you get older, you change your major, you move back home, you go back to school, you have no epiphanies, you receive no blinding insight, you can’t point to the moment when you realize you don’t believe and never have because there is no moment — there’s just a haze of indifference, an overwhelming, invisible inertia that keeps you doing things the way you always do them even though you don’t know why you do them.

You call your dad. You ask him about his childhood, about coming to the U.S. and coming to Christ, about what he believes. You talk for a while. “Dad,” you say when you’re about to hang up, “Dad,” your voice catching, “Hypothetically,” your chest thumping, “Hypothetically speaking,” a strange feeling swelling in your heart, “If I had a belief that was different from yours,” a feeling you’ve gotten very good at not feeling, “If I, say, didn’t believe in God anymore, would you still love me? Would you still care about me? Would I still be your son?”

Boen Wang is an MFA candidate in nonfiction at the University of Pittsburgh. You can read more of his work here.