Read
By IssueBy SeriesBy TagBy Date
Engage
Learn about InheritanceSign up for our newsletterSubmit a story ideaBecome a donorShop the storeContact us
Connect
InstagramTwitterFacebook
Issue #29 | Jan 01, 2015 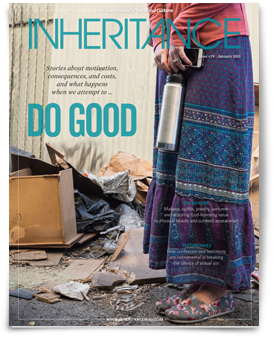 WHEN YOU IMAGINE the epitome of doing good, it might look something like this: You’re an activist that goes door to door in the name of social justice.

#NoMaskNoCape #NoProblem
An interview with EUGENE CHO by GIOVANNY PANGINDA

I PRAY THAT doing good and fighting for justice never goes out of style.

Overcoming the Dark Side of Church Planting
by Ray Chang

MY FIRST FULL-TIME pastoral position was in a large Korean American church in Vienna, a suburb of Washington, D.C.

EAST OAKLAND IN California is home to International Boulevard, a 40-block hot spot for child trafficking.

“DO YOU WANT to try Korean-style prayer?”

NO MATTER WHO we are or which small corner of the universe we live in or come from, we cannot seem to escape stereotypes.

Only His Love Can Save My Seoul
an interview with Jason Y. Lee by HEIDI KWON

HE WENT quiet — just long enough for me to feel that maybe the question was too personal.

The Silence of Sexual Sin
by Justin Lee

I STRUGGLE WITH sexual sin. For as long as I can remember, I’ve been addicted to this toxic drug, and it has plagued my spiritual life even before I understood what it was.