Sitting with the Pieces

Part of 2 of in
By Jennifer Kung
Illustrations by Alycea Tinoyan
Nov 01, 2017 | min read
Part of 58: Of Gods and Men
11 Snaps
11 0 Snaps
Oops! Something went wrong while submitting the form.

Two pastors whom I trusted decided to leave my church five years ago, and I found myself caught in the crossfire between two groups that formed in the fallout of their decision — my beloved church and a house of prayer — that separately asserted they were truly following God.

Late one night, one pastor called a meeting with the core leaders of the house of prayer to explain how the church leaders had not been following the Lord’s calling for the church, specifically around praying for revival for Berkeley. This resulted in him leaving the church to pastor the house of prayer. “The Lord will use the house of prayer instead to release His calling over Berkeley” — his words cut deep into me, and I was confused, terrified, and at a loss of what to do.

For it was at this charismatic, nondenominational, primarily Asian American church where I truly matured as a Christian during my undergraduate years at University of California, Berkeley. It was a special time in my faith, as I encountered the power of the Holy Spirit and had such a joyful confidence in my identity in the Lord, running with fellow brothers and sisters in unified faith. I knew what I was doing. Suddenly, I was forced to choose one community over the other, and thus condemn that one community was following God and the other wasn’t. How could I choose?

This split tore my life apart, as I doubted every teaching I received from my church and the house of prayer. The conflict made it impossible for me to talk to God, which was the most painful feeling. I had nothing to stand on and felt somehow deceived, but I couldn’t put into words what I was deceived about. So I left both communities. I needed distance and moved to Los Angeles to finish my graduate program in social work and then New York to work.

After two years away, I could not find closure — to forgive my pastors and heal from the trauma of a beloved community torn apart — so in order to move on, I moved back to Berkeley. My whole objective was to go back to the way things were, when I had joy, community, confidence, purpose, and everything made sense.

As I revisited both groups, I felt familiarity and comfort, as well as pain and a sense of not belonging. I chose to attend the church, because it felt like a safer place to rebuild my relationship with God and my friends. Over two more years, I met with my pastors, shared about my experiences, and forgave them — they even apologized for the way they handled things. I also got plugged back into serving in prayer ministry — I thought it would signify that I had healed and would make me happy again. But despite my progress, I could not figure out why I still felt dead and empty inside.

In the midst of my transition back to Berkeley, I found a place to live in a large house with six other people. I only knew three of them from InterVarsity and church, but decided to give it a try.

There was Michael, an extroverted and musically talented Black man working with InterVarsity. His wife, Erina, a Korean American woman who led InterVarsity while I was an undergraduate student at University of California, Berkeley, had begun working in prison ministry. Juan, a Mexican American dancer, was getting his Ph.D. in performance studies, and his wife, Melissa, the most positive and happy white woman I’ve ever met and a lover of sweets and the outdoors. Teressa, a white middle school teacher, was a member of my church and would bake the most delicious pastries for our house. Alex, a white man, was a social worker who supported marginalized youth. I was the seventh and final member of the house, a Taiwanese American therapist working with sex trafficked youth and trying to get her life back together.

Living with my housemates was a respite from the confusion and tension I felt inside. Our house was a neutral and safe space. I could be honest with them and myself about my pain, confusion, tension, and anger. I didn’t feel judged or that my life needed to look a certain way to be Christian. They never doubted my love for Jesus and desire to follow Him, even though they saw my brokenness, witnessed my inability to engage in Christian practices, and heard my critiques about my pastors, church, and house of prayer.

Our house was a neutral and safe space. I could be honest with them and myself about my pain, confusion, tension, and anger.

In fact, they encouraged me to continue to adopt a critical lens of the church, validating my views and even contributing their own critiques. I felt relief and at the same time, a fear of disrespecting my pastors, especially since values for honor and harmony were deeply instilled in me from my Taiwanese upbringing. And yet, it felt so good to verbalize my views on the culture and theology of the church and the dissonance I felt between my life and what was preached at church.

Their stories widened my understanding of who Jesus is and the power of the gospel. I listened to how Michael’s belief in Jesus was tied to receiving freedom about his Black identity and how he lives out the gospel by tackling and dismantling racism. Erina was involved in a clergy cohort that organized collective action against police brutality to end the criminalization and oppression of people of color in our community. I listened to Juan’s story of relying on Jesus through his scary, difficult, and long process of becoming a U.S. citizen and how he uses dance as a way to tell the stories of undocumented immigrants. I saw how Melissa, Teressa, and Alex acknowledged their white privilege and how they supported people of color by listening to stories, joining in protests, and examining their own biases.

Their stories widened my understanding of who Jesus is and the power of the gospel.

The way they lived out their faith made me more aware of how my own assumptions of following Jesus were largely shaped by my Asian American evangelical church experiences. I was judging myself based on standards that apparently weren’t the same for all Christians. I realized that I didn’t need to serve in the church, engage in intercession or the prophetic, or be passionate about bringing “revival” to Berkeley to be Christian. My previous way of following Jesus wasn’t the only way to be “holy” or “right with God” and I didn’t need to strive to make my life look like that again.

It couldn’t look like that again because at the time, I provided therapy for mostly young African American women in Oakland who were at risk of, or currently being sex trafficked and exploited. I was regularly exposed to the trauma, abuse, and violence in their lives and saw how their suffering was further exacerbated by the foster care and juvenile justice systems. Following Jesus had to involve standing alongside these women.

Working with this population was emotionally heavy and draining, and my housemates listened to these hard-to-hear stories and helped me process them in relation to my faith. We had regular conversations about the sociopolitical climate of our community and nation, and we grieved the shooting of our neighbor who lived in the back unit of our house, engaging in collective action against police brutality and lamenting the sins of racism through worship and prayer.

They modeled a way of living out my faith in an unjust and suffering world, in the midst of me considering the harsh, critical, or silent voices from my pastors and nationally esteemed Christian figures on these social issues. They gave me language, and most importantly, permission to expand my concept of living out the gospel in support of marginalized communities.

But I was also terrified at how my political views were slowly shifting to the left. I grew up in a Chinese immigrant evangelical church, and my parents and former pastors all had conservative views on social and political issues that they believed were centered on truly loving and obeying God. It was ingrained in me that progressivism was blasphemous — if you’re pro-abortion or pro-gay marriage, then you’re not a Christian. However, I found myself showing up in more progressive arenas — because it felt right from the stories and lives I encountered — even though there was a voice in the back of my head saying I was sinning.

I was also terrified at how my political views were slowly shifting to the left.

It feels as if there are “opposing sides” in the body of Christ on how to love people, especially the poor, oppressed, and marginalized, like my pastors who had different views of what the Lord was saying about our church. I understand the conservative side I grew up with, how loving people looks like saving their souls so they can be with Jesus, pointing out what is sin and what isn’t so that they don’t go to hell. I originally had these views, too, and appreciated the boldness of these pastors declaring the “righteous” way of following the Lord. But I also see the fruit of these words and actions: usually judgment, division, and painful rejection. I can’t subscribe to this way of thinking anymore, because I’ve seen how it has ruined people’s relationships with one another and God.

It feels as if there are “opposing sides” in the body of Christ on how to love people, especially the poor, oppressed, and marginalized.

Righteousness exists and I wonder what that looks like today. How would Jesus care for the poor, oppressed, and marginalized, while still recognizing what is sin? I still feel pressure to reconcile these conflicting thoughts, but I am now OK with sitting in the messiness to piece together my faith with social justice and the prophetic, to feel fully Christian while standing with the marginalized.

I recently decided to stop going to my current church so that I can attend a church that helps me better understand how justice fits into the gospel. It has been scary to venture beyond the familiarity of what I’ve known all my life, but I’ve reached a point where I need more answers and I’m not satisfied with what I’ve heard so far. I don’t think one side has it fully right, and I’m trying to find my voice in the midst of these competing perspectives to figure out what it looks like for me to follow Jesus. 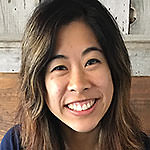 Jennifer Kung is a Taiwanese American mental health therapist and received her MSW from Smith College. She has worked with sexually exploited youth in the San Francisco Bay Area and is currently providing therapy for the low-income Asian population in Oakland.

Alycea Tinoyan is a Los Angeles-based illustrator and designer, cat mom, and adventurer. Influenced by comics and cartoons growing up, her illustrations address raw emotion through expressive lines while using nature and animals as metaphors for the duality of man. Her works tend to be narrative-based and often focus on a wistful protagonist.