Reflections on God, Creation, and Humanity

I teach first year composition at a university in Long Beach, California. My university is unique in that it offers this course through its four ethnic studies departments, including Asian American Studies. During my time in this department, I developed a writing assignment that challenges students to ponder their majors and consider how it might relate to other parts of their lives, such as their personalities, upbringing, familial pressures, or cultural values. Because many of my students are children of immigrants from Asia, I’ve found that their majors and professional goals are often collaboratively and intergenerationally selected, or assigned, as they like to add. They come upon their fields of study in conversation with their parents’ expectations, family traditions or needs, and their individual desires.

A student’s response from a couple years ago left an impression on me. He wrote that he wanted to be an environmental scientist and that he wasn’t sure how it related to his life and future vocation. His parents had not pressured him into any particular field, and he didn’t grow up inspired by another environmental scientist. Then he mentioned that he was a Christian, which, to him, made his field of choice odd because he didn’t know how to align environmentalism with his faith. To him, working to preserve the environment seemed unrelated to Christian life.

I was both intrigued and disheartened by what he wrote. At that point, I was about halfway through my seminary education where I had learned to integrate theologies of creation care and had embraced a cosmic scale regarding God’s future redemption that includes all created things, human and nonhuman, bodies and souls. I felt compelled to invite the student to deeper exploration of the tension he felt. I wrote to the student, I don’t see any conflict between Christianity and care for the environment. Then I urged the student to think deeper, to turn over new thoughts, to work through unseen connections. My student is not alone in not recognizing ecological imperatives in the Bible, especially when considering how God is first introduced.

In the Bible’s creation account, God leaves a very strong first impression. In Genesis 1, God is introduced as a benevolent and intentional Creator. God emits light into the universe, separates the sky from the waters, and creates land. God fashions the sun and moon and fills the sky, waters, and lands with living things. This imagery reminds me of the animal and plant kingdom I learned about in middle school, and I imagine them roaming and adorning the planet through the many millions of evolutionary cycles. I also think back to a geology class I took in college and the assortment of “earths” that exist. In fact, the first human’s name “Adam” is derived from the Hebrew word adamah, which means something close to “ground” or “soil”. Thus adam is not a name so much as a description, an extension of the earth.

This is the way God chooses to introduce Godself. In Genesis 1 and 2, there is an artist at work whose medium of choice was life itself. And this artist calls their creation good. By introducing themself as Creator, God essentially binds Godself to their creation. In the way the title of “parent” is defined in light of its relationship to a child or children, a Creator necessitates something created. God intentionally enters into a mutually constitutive relationship with their created. And the “created” includes humans as well as everything green, brown, bright, earthy, floral, breathing, inanimate, existent.

In Genesis 2, God places adam in the garden of Eden with the command to “till it and keep it”. Thus, the Creator appoints a steward. In this story, God’s creation is left in the literal hands of humanity. Humans cannot make something out of nothing, as God does, but they can care for what has been fashioned. Creation reaches completion once humanity is commissioned, perhaps God rests the following day trusting the ability of adam, earthlings, to continue the work.

At the end of the Bible journey, God circles back to the very first impression, though this time from an augmented register. In the concluding chapters of Revelation, God reaffirms creation. God’s river flows from the temple infusing life into all the world. In this image of heaven, there are humans and trees and landscapes. In the beginning, God created all things, and in the end, God will restore all things. Between creation and restoration, God exists in a loving, redemptive relationship with creation, and humans partner with God as stewards who care for God’s creation. Tilling the earth requires us to pay attention to it, and keeping it requires us to take responsibility. For me, this is not an elective activity but a description of my part in between the first and last impressions of God given in the Bible.

This work is something I hope more Christians will consider, especially now when it matters most. Scientists say that the future of human life on this planet is more precarious than it has ever been. Our use of fossil fuels and plastics, our carbon emissions and patterns of deforestation and desertification, our habits of excessive consumption and waste are putting an untenable pressure on the earth in ways that are harmful to the environment and entirely fatal for us humans. The unjust reality is that the effects of environmental disaster will disproportionately affect those who are impacted by systemic oppressions, like the poor and people of color, even though the main contributors to ecological destruction are wealthy, privileged members and industries of developed nations. For example, local oil drilling in Long Beach, California, where my university is located, is causing various illnesses, such as asthma and cancer, among its predominantly Latinx population. Climate change is exacerbating economic inequalities, one example being climate disasters producing refugees who face discrimination and barriers as they are forced to seek new countries of residence. Thus, neglect of the environment is producing new and revised forms of oppression around the world.

Yet, outside of my professors at seminary, I have not heard a single pastor from my context speak about this from the pulpit. Through my years of involvement at Pentecostal and Reformed churches in the West Coast and East Coast, I was never challenged to consider how environmentalism reflects and shapes my Christian formation and vocation. It took a seminary degree to help me read the depth of God’s first impression as Creator and to read Genesis 2:15 more thoroughly.

I’m not an expert of the environment, nor am I particularly knowledgeable about theology. Yet I do know that for all the ecological devastation we are experiencing, and which is increasingly heightening, there is not nearly enough concern and conversation among Christians about it. And although environmentalism is not my main “life’s work”, I believe that creation care is an essential part of how Christians live their identities as creatures made by God and as stewards to care for the rest of creation. To me, this means that something as mundane as littering is a form of rebellion against God.

As an environmental layperson, change has come in the form of small steps in my daily life. For example, I switched out old light bulbs for energy efficient products. I turn off the faucet between washing routines. I use reusable zipper bags and dish cloths instead of paper towels. I compost. I read into a company’s ethical standards and practices of sustainability before making purchases. Of equal importance, I read the Bible with a lens toward environmentalism, and my approach to Christian formation and vocation situates the position and place of humanity in creation and the larger mission given to us at the outset of the Bible.

Whereas in the past I may have brushed over a remark disjoining creation care from Christian faith, today the alarming rate of ecological devastation leaves with little room for passivity. A single conversation can have transforming power and it can yield significant shifts. An example of this is with my student, who offered the following reflection after our conversations:

“At first, I thought my religious upbringing ... could never be helpful in the field of environmental science ... However, after much thought, I realized that Environmental Science is beneficial to one of the core values of Christianity, God’s creation ... One of the first stories that I learned from the Bible was how God created the earth and all of its inhabitants in six days. God’s vision of what earth should look like, is one of his greatest creations ... Now, the world that God loved so much is deteriorating every second. The animals that God creatively made, the beautiful oceans and places God created, and most of all, God’s people around the world are being negatively affected by the state of the earth. If God gave us this beautiful home to live in, it should be our responsibility as God’s people to take care of what God loves.” 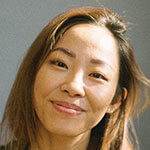 Julie Yeeun Kim (@julieyeeun) is a Korean American woman born in Korea and raised in Los Angeles, CA. She teaches in the Department of Asian and Asian American Studies at CSU, Long Beach and is concurrently a seminarian at Fuller Theological Seminary. She likes to write on topics related to identity, family, and faith. She's a singer, songwriter, and worshipleader.