A Jab in Worship

Combating the Fear of Anti-Vax Conspiracies

“They did this to her. It was completely preventable!” we said angrily, shaking our heads. I was a pediatric resident on a medical team treating a previously healthy infant for a severe brain infection caused by Haemophilus influenza type B, or Hib. Invasive infections caused by this common bacterium used to strike fear in the hearts of pediatricians frequently — it leaves 1 out of every 5 infected children with irreversible hearing loss and severe neurological impairments, and causes death in up to 6% of infected children. Since the Hib vaccine became a part of the childhood vaccine schedule in 1991, rates of such infections have decreased by 99%. It is now rare to see a single Hib infection in the three years of a pediatric residency. Years later, I have yet to see another case.

My residency life was consumed by data. Every clinical decision I made was met with the question of whether or not scientific evidence supported my plan. My colleagues and I read, debated, and critically broke down everything we learned, pursuing science for the sake of our patients and communities. The more confident I grew with knowledge, the more I saw people as ignorant if they did not believe my synopses of the data. To me, it was simply inconceivable that anyone would willingly choose not to vaccinate their children when the benefits so clearly outweighed any risks.

But as I matured as an individual and became more experienced as a pediatrician, I began to recognize that most parents who are reluctant to vaccinate act out of fear, not ignorance. I have also discovered that vaccine hesitancy, a direct result of anti-vaccine propaganda, varies greatly. It ranges from the father with an extreme distrust of the government to new parents who just want reassurance after being misinformed by a family member. While approaching families along this spectrum, I am constantly learning by trial and error. Instead of being disappointed, I try to see these encounters as a step toward an eventual win, where kids are at least partially vaccinated or even catch up one day. Getting to this point of understanding has been difficult. I had to take a hard look at my intellectual humility. I also had to acknowledge that the war I face every day as a pediatrician is not just cultural, but also spiritual.

Anti-vaccine conspiracies thrive on fear. Several times a week, I hear “I’m not anti-vax, but ... ” — but they don’t think their child needs ALL these vaccines. But they think it would be better to space out the vaccines rather than follow the schedule. But they’re not 100% sure the vaccines won’t cause them permanent damage. And in these conversations, it often means little for me to explain how insignificant the risk of vaccine injury is to the very real possibility of brain damage from Hib. As with Peter among the waves, fear can cause blindness of everything but oneself. When we let fear dictate our lives, we cease caring about others. We no longer think of community.

Vaccines were created for public health, or the well-being of communities. Across time and geography, vaccines have allowed communities to flourish and focus on building rather than simply surviving. Receiving a vaccine protects me, but that simple gesture also protects you. The current data suggests that because I have received a vaccine against COVID-19, you can be reassured that I will be unlikely to transmit the virus to you.

My understanding of following Christ is summed up in Matthew 22:37-40, which defines how individuals in a community should live: Love God with all that you are and love your neighbor as yourself. In his book, "The Dangerous Act of Worship", Dr. Mark Labberton writes that worshipping, or expressing our love to God, is equivalent to loving your neighbor. They are one and the same. In the same way, I have come to see vaccination as a reverent responsibility and duty to protect myself, my family, and my community. It is a promise to protect the most vulnerable as defined in Scripture — the widow, the orphan, and the poor. Each of these represent a segment of the marginalized in our current world, who might be at greater risk of severe illness and death from COVID-19 and other diseases.

Through this lens, intentional anti-vaccine conspiracies are the antithesis of our faith. Vaccines save lives — not just our own, but our neighbor’s as well. Yet, the fear driven by anti-vaccine conspiracy diminishes our consideration of others. Instead, in the face of this fear, we become blinded by the unlikely chance that we might bear harm and forget the overwhelming truth that we will prevent harm to so many others, especially those marginalized in our communities. Because of this fear, we rely on herd immunity and let others do the work for us. The conspiracy is so effective that even some of us in the medical field buy into the anti-vax fear, despite understanding that scientific advances are gifts of God and recognizing that vaccine recommendations come from altruistic scientists who have dedicated their lives to preventing illness.

So far, the best way I have found to reassure and, on rare occasion, change minds, is to develop relationships and build trust by showing up consistently and celebrating successes outside of vaccinations. That is, I recognize that vaccines are not the only way we can show love to our neighbors. An earlier version of myself might have thought I failed if I accommodated requests to space out vaccines. That same self might even be disappointed with how little time I sometimes spend discussing vaccines. But I am now aware of the greater difference I can make in choosing to focus more on a child’s emotional and social development or a parent’s mental health. When I demonstrate that I see my patients and their families as human beings and complex individuals within my community, I live out my belief in loving my neighbor.

To combat fear, we can live out a hope that inspires others to take action in caring for community, from living more sustainably to accepting the responsibility of a vaccine. Only as we start looking beyond ourselves can we fully live into a faith that expresses worship through a love of neighbor and community. 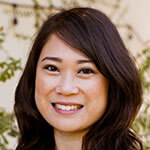 Grace Lim (she/her) lives on the central CA coast with her husband and two adorable doggies. She is a pediatrician with a master of public health who dreams of universal healthcare and social justice. Her self-care includes painting, making music, and hot pot.