“Now, comrades, now is the time to decide to change sides. We must shake off the great mantle of night which has enveloped us, and reach for the light. The new day which is dawning must find us determined, enlightened and resolute. We must abandon our dreams and say farewell to our old beliefs and former friendships. Let us not lose time in useless laments or sickening mimicry. Let us leave this Europe which never stops talking of man yet massacres him at every one of its street corners, at every corner of the world.” — Frantz Fanon (1)

The time is now. The Black riot is also a multiracial riot: by doing solidarity work across racial lines we refuse how racial capitalism has divided and conquered us. Narratives about outside agitators, violent opportunists, and even police instigators seek to discredit the movement and deny Black agency. Those who were in support of Hong Kong’s protests should be in support of the Black movement now. Hong Kong’s protestors were battling China’s extradition bill since last year, but have been fighting for democracy at least since the 2014 Umbrella Movement. They destroyed property in protest, and demanded police abolition as they were tear-gassed, beat up, and shot at. (Their tear gas was made in the U.S.) Black intellectuals have already laid out the arguments for prison and police abolition long ago; to hold back now is intellectually indefensible.

The time is now. Violence against private property cannot be enshrined over violence against Black lives. Looting is the redistribution of wealth concentrated not only at the top, but also on the level of petit-bourgeois people of color. A gentle reminder to those leaning towards socialism: the Communist Manifesto has less to say about the state than it does about the “abolition of private property”. Minneapolis activists have turned a Sheraton hotel into a shelter for people who are houseless or escaping curfew, and it is a glimpse into a beautiful world.

The time is now. The Black uprising is not only about race, it is about class. As “middle minorities” it is only natural that Asians are caught in the middle. Middle-class aspirations have often come at the expense at Black and Indigenous people in the US. During the LA riots in 1992, Koreans armed themselves against Black looters. They became known as Roof Koreans,(3) and appeared to offer their services during Ferguson in 2014. Now in 2020, we are again seeing some people of color defending their businesses with guns, while others are offering solidarity, saying, “Let my building burn. Justice needs to be served.” We can be different. We must be different.

The time is now. The Black movement is also about gender: even as George Floyd’s name resounds in protests internationally, the deaths of Breonna Taylor and Tony McDade remind us that Black radicalism today is built on the backs of women and LGBTQ folks such as Black Lives Matter founders Alicia Garza, Patrisse Cullors, and Opal Tometi; #MeToo movement founder Tarana Burke; and Yellow Vests movement co-founder Priscillia Ludosky. It is women of color who have led the way in coalitional organizing, which themselves grew out of the Black Women’s Agenda.

The role of Asian radicals in this moment, as it was in the ‘60s, is to follow the lead of the Black movement. Black liberation is Asian liberation. We have been talking about liberation for a long time, but Saidiya Hartman also warned that “a Black revolution makes everyone freer than they actually want to be”.(4) It will be painful, it will be costly, but it will also be righteous. If you are asking what you can do right now, the answer is not simply to be antiracist, to donate money, or vote: the answer is join the Black movement.

The time is now. We cannot be caught sitting on the sidelines. Solidarity statements, while symbolically valuable, ultimately miss the point. The Black struggle is our struggle. Everything we have collectively learned about race and capitalism tells us our struggles are inextricably connected. Lisa Lowe tells the histories of Africa, Asia, Europe, and the Americas as the “intimacies of four continents”. The Black movement does not need us, but the Black movement will accept us still. Whether as healers, as protestors, or as comrades, whether in providing mutual aid, redistributing wealth, or posting bail, there is work for everyone.

There will be a time to talk about Tou Thao, one of the four Minneapolis police officers involved in George Floyd’s death. He held the onlooking crowd back as officer Derek Chauvin lynched Floyd with his knee. Asian Americans have expressed anger at his complicity, but this has also generated backlash against Hmong refugees. Thao’s passive role has sparked a wave of introspection and indignation among Asian Americans, not least among “elite-educated, upwardly mobile East Asians”. Are we Southeast Asian Americans so readily disposed of, who have been weighing down average Asian American prosperity? So for those East Asian Americans who want to show up for Black lives: also show up for the Hmong community. Show up for the refugee community the way the Black community has. Join the Black movement.

We have to make room for the complexity. To disavow the Tou Thaos of Asian America is too easy, too incomplete. The history of Asians in the US is a complicated story of inclusion and exclusion: in 1922, Takao Ozawa fought to be considered white by the Supreme Court, arguing that whiteness was defined by cultural practices and loyalty to the nation-state. In 1991, shopkeeper Soon Ja Du shot 15-year old Latasha Harlins, which, together with the police killing of Rodney King, exploded into the LA riots. In 2014, NYPD officer Peter Liang shot Akai Gurley, whose conviction led to protests from some of the Chinese American community.

On the other hand, Asians first arrived as indentured laborers, coolies, farm hands, and ship crew. Then they arrived as economic migrants, asylum seekers, international students, and victims of trafficking. In 1982, Vincent Chin was beaten to death during his bachelor party by disgruntled autoworkers in Detroit. In 1995, 16-year old Yong Xin Huang was shot in Manhattan by NYPD police over a BB gun. In 2017, massage parlor worker Yang Song fell to her death during an NYPD raid. Since 2001, Islamophobia and hate crimes against people of South Asian and Middle Eastern origin have not ceased. In 2020, hate crimes against East Asians are seeing a resurgence.

I am Tou Thao. I am also Yong Xin Huang.

What we must reject is respectability politics: being as successful as Christian Cooper did not insulate him from white supremacy. What we must reject is the model minority myth that tells us we could belong if we knew how to be anti-Black enough, if we sued for admission to Harvard. What we must reject is the false binary of “this is not who we are,” and work with and through our complicities in racism and antiracism. Yet, these complexities are not particular to Asian America: the Black radical tradition has always had to deal with their own petit-bourgeoisie, with Black faces in high places. This moment is Asian radicalism in the making, in the spirit of our own Asian radical tradition. May the courage of those who fought before us be honored; may the burdens of those who come after us be lighter.

To move forward, we build as we fight. We do this together. We do the work of liberation, abolition, and antiracism because and in spite of ourselves, our communities, our histories. Any theologian of liberation will tell you plainly: God is right now in the streets, and God is also sheltering in place. Shout in the streets, organize online, make art, build relationships, sell all that you have, do the work of a lifetime. To echo the mandate of Black people in this time: avenge the suffering of Black ancestors, earn the respect of future generations, and be willing to be transformed in the service of the work. The time is now. 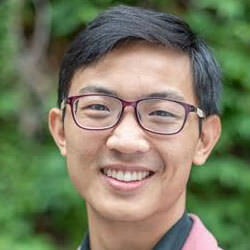