Seeing the Vastness of the Body of Christ

A bubble is a funny thing. Having grown up in the Southern California San Gabriel Valley, dispersing my time between a 60% Asian American high school and an immigrant church in Koreatown, Los Angeles, my perception of normal was not hyphenated with the word Asian. It was normal that every year, members of my high school’s prom royalty were in the orchestra or went to SAT prep courses after school. It was normal that our youth pastor (whichever one was in rotation that year) would make references to fermented cabbage, Starcraft, and parents who associated our sense of identity with academic performance. It was normal to make jokes about someone’s particular articles of clothing being fobby or to playfully say, “Man, you’re so Asian.”

But when I transplanted myself from Koreatown to rural North Carolina for a pastoral internship through Duke Divinity School, those same jokes about being Asian didn’t quite have the same tone, because, for the first time in my life, I was the only Asian in the room.

Up until then, my Christianity was devoid of racial and theological diversity. But in that complicated space of facetious racial humor meeting academic study of the Christian faith, I began a journey of discovering the beautiful complexity and vastness of the body of Christ.

As I grew up in a Korean church, I remember taking in the spectacle of my parents’ piety in the form of early morning prayer, meeting with other Korean immigrant Christians each morning at 5 a.m. to pray. But I did not find a faith to call my own until I stumbled across Pan Asian expressions of Pentecostalism. The remnant wave of John Wimber’s Vineyard movement had captured the imagination of a few Asian Americans in the San Gabriel Valley and I fully immersed myself into those waters. Leading worship and prayer meetings multiple times a week, I prayed in tongues, prophesied, interceded for revival, and sang for hours about the intimate love of Jesus.

All was well. I had found a theological ideology to make sense of my 16-year-old experience of the world. Jesus was Lord. The Holy Spirit was real. Revival was on its way. And our small Pan Asian charismatic church plant, comprised of mostly broke college students, was going to be the means by which the Kingdom of God would arrive on earth, so long as we sang and prayed loud enough for the world to hear. It was the best of times.

A Disorienting Pain, an Untethering Question

Then I experienced what most young, idealistic Christians undergo at some point in their lives — I saw and felt the pain of messy ecclesial relationships and power structures gone awry.

There was a major severing in the church. My spiritual heroes were at irreconcilable odds with one another. I developed a cynicism toward the prophetic ministry and the charismatic gifts. Finally leaving the church resulted in my reputation being tarnished. My Christian worldview was deconstructing before my eyes.

I’ve come to see that disruptive pain is often what opens us up to new ways of seeing God and the church.

This ecclesial and theological disorientation invited me to raise the question: What if praying in tongues and prophesying for a coming revival wasn’t the cutting edge of Christianity, but only one expression of it?

This was the beginning of what would be a long rabbit hole for me.

I started exploring the bigger tent of the Christian faith. The year was 2007. Mark Driscoll and Rob Bell were YouTube sensations. Bell’s NOOMA videos were all the rage. So was the young and brash Neo-Reformed preacher Driscoll. Tim Keller was capturing the imagination and academic heartstrings of the Asian American community. But it wasn’t until I came across a Wikipedia article on the 18th Century Anglican priest, John Wesley, that I started to feel at home again.

Wesley’s advocacy of practical divinity, social holiness, entire sanctification, social justice, and heart religion warmed my heart. I loved that this movement he began was not about starting a new denomination but radically embodying the faith his church already confessed. Methodism carried the tone and passion of the charismatic church, but it had one very significant point of difference: theological humility.

“Though we don’t all think alike, can’t we all love alike?”

“In the essentials unity, non-essentials liberty, but in all things charity.”

“Is thine heart right, as my heart is with thy heart? If it be, give me thine hand.”

In Wesley, I felt like I had discovered the echoes of a theological home, so I kept listening.

White Methodists, White Baptists, and Me

The rabbit hole continued. My affinity for Wesleyan theology led me to Duke Divinity School, a Methodist seminary in the strange and foreign land of North Carolina. I found a part-time job leading worship at a local evangelical pseudo-Baptist megachurch.

From Monday to Friday, I sat at the feet of white Methodist scholars. On Sundays, I served as a campus worship leader for a Southern Baptist megachurch. My seminary professors wondered why I worked for a misogynistic group of white men. My evangelical pastors wondered why I was attending a heathen seminary. With sincerity, one church member even asked me if I was a missionary to Duke Divinity School.

But there was an eerie similarity between the seminary and megachurch, which were at theological odds with one another. My ancestry made me an outsider to both.

I found myself in precept discussions and leadership meetings being asked to represent the minority voice. For the first time, I was asked questions like, “What do Asian people think?” And “Being from a different background than the rest of us, Mike, what do you think?” I was sincerely, albeit inappropriately, asked to be the expert voice on Asian ecclesiology, spirituality, and sociology. Of course, my responses were very underdeveloped.

My desire to grow theologically led me to the indelible responsibility of thinking racially.

As awkward as those questions were, they served as an invitation for self-reflection and awareness of the second generation immigrant story.

Not everyone had parents who expressed their piety through loud orations in the early hours of each day. Not everyone spent their adolescent years navigating through the enigmas of bicultural identity. And more personally for me, not everyone was formed by Pan Asian charismatic movements of Southern California.

The Tension of Minority Leadership and Defining Multiculturalism

Of course, all those questions for an “Asian perspective” weren’t asked in a vacuum. The megachurch and the seminary both wanted to become “multicultural”.

It was painful. I realized that my Asian body on a stage or in a photograph was a commodity. I began to see that although my input was always valued, my voice did not carry much weight in a decision-making vote. Furthermore, I saw majority culture continuously gather input and then define multi-culturalism for themselves.

Each day, I had the choice to be bitter or gracious. I often thought about the church split that led me down this rabbit hole to Carolina in the first place. Division in the church is not often driven by racial bias.

Minorities in monolithic institutions seem to have three paths: assimilation, insubordination, and differentiation without detachment. I confess I oscillated amongst all three.

Owning Your Story and Merging with Others

Ultimately, my time in North Carolina led me to pursue ordination in the Texas Annual Conference of the United Methodist Church. In 2015, I was appointed to serve as an associate pastor of a large suburban church in Houston that was 99 percent white.

I found myself preaching to a native Texan congregation filled with oil and gas industry executives, lawyers, politicians, and doctors. I would often anxiously wonder, “What business do I have presuming to proclaim the word of God to people who don’t look or think like me?”

I grew increasingly anxious every week. The temptation for assimilation was strong. Every week, I felt the safest thing to do was to take on the persona of a Southern white Methodist pastor — to emulate their colloquialisms, their charm, and their wit.

Instead, I leaned in to my own stories of growing up with immigrant parents. I spoke of my struggles of navigating the social economies of school cafeterias in Los Angeles. I made references to Allen Iverson and Bone Thugs. One Black lady in the balcony understood what I was talking about.

But something beautiful began to take place.

My Asian-ness, or more precisely, my particular story, albeit different from most, was not a hindrance, but rather an on-ramp toward the merging of multiple cultures. People of various European heritage resonated with stories about my lovingly stoic father. A small group that my wife and I helped start embraced our practice of tongsuk kido (a style of prayer practiced in Korean churches where everyone prays aloud at the same time). My family and I experienced the congregation’s embrace of our authentic selves.

I am currently leading a new community of faith. As of this writing, we are nine months old. Our congregation of 50 people are a mix of Asian, African American, white, and Hispanic descent.

In some ways, my experiences in various ecclesial and theological contexts have prepared me to be a pastor in the city of Houston, but in many ways, I feel as though I am just continuing to explore the rabbit hole that I started down on many years ago.

The body of Christ is much more complex and diverse than we know. The company of Jesus, the Jewish Rabbi, has always been an awkward bunch. The uneducated fishermen, the Syrophoenician woman, the centurion, the Samaritan woman, the Pharisees, and the children all sat at the feet of Jesus. The New Testament is anything but a neat story of how the gospel extends to Jew and Gentile. It seems like the disciples are going down on a rabbit hole of their own, seeing how vast and wide the love of Christ is (Acts 11:18).

This morning, I prayed in tongues. I made myself a plate of rice, kimchi, and eggs. And I went to a local Houston coffee shop to work on a sermon that will hopefully give shape to a diverse Wesleyan community devoted to confessing a Palestinian Jewish man as Lord. Later today, I will visit with a white, middle-class, empty-nester mom who serves as a lay leader of our church. We will discuss our church’s model of discipleship, and plan a chili cook-off for our small groups later this month.

How beautiful and strange it is to be a part of the body of Christ. 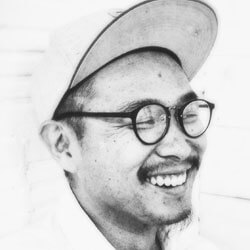 Mike Whang is an ordained elder in the United Methodist Church. He currently serves as lead pastor of Oikon Chapelwood in Houston, Texas. Connect with Pastor Mike and Oikon on Instagram @mikewhang and @oikonhtx.