The Trap and Trappings of the American Dream

As an immigrant and as someone of Black skin color, Beverly finds unexpected resonance with the experience of Asian Americans.

I WAS DISMAYED when my parents first told me that we'd be leaving our brownstone home in London for a small, two-bedroom apartment in Los Angeles. I was a Kenyan girl with a British accent — moving across the ocean meant leaving the country I had come to love and entering a society I only knew by watching American programs on television.

When, my parents decided to move into the land flowing with milk and honey, it was our second time immigrating. My father was trained as a pharmacist in Nairobi, Kenya; when we moved to England, the law required that he not only be re-licensed, but he also had to go back to school to get a new pharmacy degree. Having to support a family and not having the time or resources to re-educate himself, he worked odd jobs as a video store clerk and a dog walker until he was able to finally get work inside a pharmacy — just not as a pharmacist.

But his degree was recognized in the U.S., which meant he only needed to go through the licensing process to practice pharmacy. This served as the reason we would once again pack up and move to a new continent, to the country where allegedly, all dreams come true.

“if i can make it there, i’ll make it anywhere.”

When we touched down in Los Angeles and walked into our new apartment, my reluctance melted into excitement. My mother tells me that my first words were, "Wow! It looks like Bill Cosby's house!" In hindsight, the house we left behind in London was much more in the style of the Huxtables' Brooklyn brownstone than our new Mojave Desert, motel-like home.

I was certain that finally, starting at 10 years old, I'd get to live a life like the one I'd seen on "The Cosby Show". The life, as the entire world knew it, was the American Dream: where anyone could pursue what they fancied, and families ate sweet potato pie every November. It was my opportunity to experience the American Dream up-close and personal.

I was certain that finally, starting at 10 years old, I'd get to live a life like the one I'd seen on "The Cosby Show".

My sister and I were several months behind in the school year, and were to start school immediately. But there was one problem. I had to figure out what I was wearing to school for the first day. I told her that kids in America don't wear school uniforms. Deciding to play it safe, I tried to figure out the uniform code. But since we did not as yet know what the school colors were, we had to improvise. When I went to school the next day, my outfit — navy slacks, black dress shoes, and a white collard shirt with a fleur-de-lis pattern on it — was met with strange stares and chuckles. This was when I first realized that there was a standard way of "being" that I needed to learn and live up to.

We often hear the triumphant stories of immigrants who built Silicon Valley empires from the ground up, like Sergey Brin, Steven Chen, and Elon Musk. Or, like my dad, stories of opportunities to start afresh. What we don't always see are the immigrants who are undocumented and have been demoted from their previous occupation of banker or analyst, to being a custodian or waiter. Interestingly though, to those back home, a job demotion doesn't matter. It doesn't matter if you used to be a lawyer in your old country and have become an Uber driver in America. The fact is, you're in the United States of America — you've officially "made it".

but you haven’t made it.

What makes the centuries-old endeavor of striving for the American Dream so interesting is that the Dream comes in one size: large, with plenty of room to move around in and customize. No matter which continent immigrants come from, they are still sold the same-sized dream: acquire an American accent, buy a house, go to college, make lots of money, learn to do things American kids and adults do.

Soon, I realized that the American Dream is part reality, part charade, because you can both "make it" and not "make it" at the same time. There are the winning stories of triumph, but there are also those struggling in the shadows.

Soon, I realized that the American Dream is part reality, part charade.

My first day of American school was filled with alienation and shame. I looked and sounded different from the other kids, and things weren't as they seemed on TV. I wasn't American; I was the Black girl with an English accent. It was the first time I felt different.

There were also the constant reminders of how my family hadn't fully "made it" in America. The four of us had to wait over a decade to get citizenship; the first 10 years I lived in this county were filled with requirements that came along with the tedious visa renewal process. I grew accustomed to waiting in long lines and getting pulled out of school to get fingerprinted for application after application. Then, there was all the waiting required for statuses to change; first from visa to green card, then from green card to U.S. citizenship.

At the same time, when my family bought our first car, a black Nissan Maxima, it distinctly felt like my family had "made it". We were like the other families I saw on the street! The amazing sense of freedom this car brought us was extraordinary. Now, not only did my dad have a job as a pharmacist in the U.S., we could also go on family vacations, just like the Americans I saw on TV.

But I was starkly aware that we weren't, in fact, living anything like "The Cosby Show". Was it just my family or did others experience this disconnect as well?

asians and i: not so different.

Imagine my surprise when I found that I connected just as much with Asian Americans as with African Americans. I attended college at the University of California in Irvine, where I was in the 5th percentile of Black students. This wasn't unusual; what was strange was that the majority of students — around 60 percent — was of Asian descent. This was thoroughly enthralling; for once, white people were in the minority, like me! In this environment, the majority Asians set the culture.

Over the next four years of my schooling, I met people from Cambodia, Laos, Vietnam, Sri Lanka, and other Asian countries. Through these relationships, I learned much about Asian cultures. For one, that there isn't one main Asian culture, but more a conglomerate of cultures. I learned to distinguish faces (because just like Black people, all Asians look "alike"), last names, languages, food, and so much more of what culture carries. But most importantly, I began to notice similarities between my own African immigrant experience and the Asian immigrant experience.

I began to notice the similarities when I noticed that fellow immigrant students were asked where they were from based on a tinge of an accent, a hint that they weren't truly "American, born and bred". For years, I had an accent that wasn't 100 percent American, but more at a stubborn 87 percent.

As my peers and I talked, we realized that we both had to navigate the complexities of college life without the help of our parents. Our parents told us to "work hard", but weren't able to direct us through the nuances of applying, experiencing, and living through our education because they couldn't, since they had gone to school in a different country.

We realized that we both had to navigate the complexities of college life without the help of our parents.

As the oldest sibling in the family, I had to do a lot of research on my own on the American education system, something that several of my Asian friends voiced they did as well. And like my other immigrant friends' parents, my parents gave me the great gift of independence, while placing high achievement goals on me.

To me, these similarities speak into a common humanity between immigrants, of ties between America and our homelands. We've had to deal with mispronunciation of names (a nod to my Nigerian and Indian brothers and sisters). We've felt the pressures to become either one of three professions: doctor, lawyer, or engineer — bonus points for a Ph.D. in anything. We've had to talk to relatives back home on the phone (for some reason very loudly) and have multiple relatives come and stay with you throughout your entire childhood (or staying with relatives yourself!).

And of course, there's the common disciplined upbringing steeped in respect for older generations that's been unshakably engrained in our hearts and minds since we were young.

While challenging, the triumphs of immigrating to a new country are well worth it. I have been baptized into a community of unique people and a historical tradition that is centuries-old. Ironically, I feel the most American when I feel most like an immigrant. I am thankful for my rich family history, but even more grateful for my family's ability to blend our rich Kenyan and American cultures. On international flights back to the US from Kenya, I am proud that I have two countries I call home. In many ways, I am living out quite a dream.

Ironically, I feel the most American when I feel most like an immigrant. 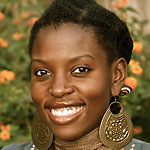 Beverly Lwenya is a Kenyan-Californian writer, entrepreneur, and Afropolitan. She founded The Afropolitan Shop in 2011, an initiative that helps African designers market their products on a global scale. She is passionate about tech, evangelism marginalized groups, and Jesus. She serves currently as the Communications Coordinator at The District Church in Washington, D.C.