Christ of the Coronavirus

A Meditation on Isaiah 53 for Good Friday

April 10 is Good Friday, when countless Christians around the world remember the suffering and death of their savior Jesus Christ. The lectionary text read each year on Good Friday is Isaiah 52:13-53:12 (thereafter I will simply refer to this passage as Isaiah 53), a passage that describes the suffering and rejection of the Servant of the LORD in dramatic detail. In the Book of Isaiah, the Servant is not only an anonymous figure who is identified with Israel and called to bring justice and be a light to the nations, but he is also an individual prophet whose vocation is to bring Israel to repentance. The New Testament writers believed Jesus fulfilled this prophecy as demonstrated in their numerous quotations and allusions to this text. Following their lead, the early church leaders made this passage central in their teaching and interpreted it as fulfilled in Christ. It is no wonder Christians have continued to meditate on Isaiah 53 each year as they remember Christ’s crucifixion.

This year, Christians who possess the ability to shelter-in-place will spend Good Friday at home because of the global pandemic caused by COVID-19. When they hear Isaiah 53, I imagine the text will resonate with people in a special way because of its numerous references to illness, social isolation, and death. Several verses in the passage describe the Servant as one stricken with disease:

The Hebrew word the NRSV translates as “infirmity” in verses 3 and 4 refers to sickness, disease, or illness in general. The word “stricken” in verses 4 and 8 oftentimes refers to some form of skin anomaly. Leviticus chapter 13 contains the most occurrences of this word (47x) of any chapter in the Bible, and there the word “stricken” is translated as “diseased” and refers to someone with leprosy. It is worth nothing that the Biblical references to “leprosy” denotes a range of skin anomalies or lesions and may not refer to leprosy or Hansen’s disease. Nevertheless, it was a dreaded condition because it would make one ritually unclean and result in exclusion from the worshipping community.

In Isa 53:8 the Servant is described as “cut off” and “stricken”. The only other occurrence of a passage where these words appear together is 2 Chr 26:20b-21a: “They hurried him out, and he himself hurried to get out, because the LORD had struck him. King Uzziah was leprous to the day of his death, and being leprous lived in a separate house, for he was excluded (“cut off”) from the house of the LORD.” Two verses later, the author concludes the narrative of King Uzziah’s life with the following words, “Uzziah slept with his ancestors; they buried him near his ancestors in the burial field that belonged to the kings, for they said, ‘He is leprous.’” Uzziah was stricken with disease, quarantined for the rest of his life, and buried with the epithet, “He is leprous.” Isaiah the prophet was well acquainted with the plight of Uzziah (cf. Isa 6:1), so it is possible the Book of Isaiah may view God’s Servant suffering the same fate — disease, quarantine, and left to die in ignominy.

'I live a 15 minute drive from Life Care Center in Kirkland, WA, a nursing home where 81 of its 120 residents tested positive for COVID-19 and 35 people died. According to a news article detailing the outbreak of the disease, a worker at the facility, “said it was agony to see stricken residents fitted with face masks and wheeled out to meet arriving ambulances, one after another ... ‘It was scary,’ she said. ‘I didn’t want to be contaminated’” (emphasis mine). Sadly, this experience of being stricken, contaminated, dying, and being buried in isolation continues to occur at a dramatic pace throughout the world. People are suffering the same fate as Uzziah — dead bodies are buried or disposed of without any mourners on hand due to the fear of infection, and in some cases, in mass graves, both in and outside the U.S.‍

While one cannot make a definitive diagnosis that the Servant of Isaiah actually suffered from leprosy, it is clear that he was treated as such. While Isa 53 describes the physical pain God’s Servant experiences, the more damaging wound is social and political — the injustice and rejection he faces due to his illness. Several passages describe this condition:

The Servant’s disease leads to disfigurement, for which he faces rejection by society. He is innocent of any wrongdoing, yet he is unjustly persecuted and left to die, whether metaphorically or literally. Commentators observe that the word for “others” in v 3, is a rare form of the word in the Bible that suggests “men of standing” (cf. Pro 8:4). If this the case, it is not just anyone who rejects him, but those with power and privilege, those who possess the means to influence a society through the manipulation of justice.

Israel’s practice of socially isolating persons with skin anomalies was based not in a moral model that assumed skin anomalies were sinful. Instead, social isolation was based on a cultural model, where ritual impurity was not equated with moral sinfulness. People became ritually impure not through sinful actions, but through everyday experiences such as sexual intercourse, sickness, menstruation, and touching dead objects. As a cultural model, the criteria that determined ritual impurity was socially constructed. Isaiah 53 exposes the injustice that can occur when those in power have the means to attribute meaning to disease; in such cases the innocent can become scapegoats.

With the outbreak of COVID-19, Asian Americans leaving their homes fear not only contracting the virus, but also facing racism and xenophobia. While donning a mask provides protection from the Coronavirus, it may invite discrimination and violence for Asian Americans and other people of color. As one news article put it, “For Asian Americans, There are Two Pandemics: COVID-19 and Daily Bigotry.” Within the first two weeks of its launch, the reporting center, STOP AAPI HATE, has received 1135 reports of verbal harassment, shunning, and physical assault. Horrifically, a Burmese man, his two, and six year old sons, have been victims of a hate crime in Midland, TX. According to the FBI report, “The suspect indicated that he stabbed the family because he thought he was Chinese, and infecting people with the coronavirus.” These events occurred during a time President Trump and other public officials, in an effort to deflect blame, repeatedly referred to COVID-19 as the “China virus”, even when warned of the danger this poses for Asian Americans. In times of crisis, people seek a scapegoat, someone to atone for their suffering. Anti-Chinese or anti-foreign rhetoric also incites historic racism against Asian Americans as the “perpetual foreigner”.

The headline for one news article, “Spit On, Yelled At Attacked: Chinese-Americans Fear for Their Safety,” sounds eerily similar to another passage in Isaiah where God’s Servant describes his experience of suffering: “I gave my back to those who struck me, and my cheeks to those who pulled out the beard; I did not hide my face from insult and spitting” (Isa 50:6). These experiences bear great similarity to the suffering Jesus endured at his trial prior to his crucifixion: “Then they spat in his face and struck him; and some slapped him” (Matt 26:67). It is this convergence of the Servant’s suffering, Christ’s suffering, and the suffering caused by COVID-19 and the racist rhetoric of “China virus” that marks this Good Friday. On this day Christ’s followers find comfort in a savior who possesses lived experience with their pain. For the author of Hebrews says this of Jesus, “For we do not have a high priest who is unable to sympathize with our weaknesses, but we have one who in every respect has been tested as we are, yet without sin” (Heb 4:15).

Today as I was finishing this article, I received an email from one of my students with only one word in the subject line: “Help.” He proceeded to tell me that his childhood friend had just died from what he believes to be Coronavirus since he had asthma. On Good Friday, as so many in the world plead for help, may Christians remember that it is “because he himself was tested by what he suffered, he is able to help those who are being tested” (Heb 2:18).

Author's note: This article is drawn from some of my previous work, “The Lynching of the Suffering Servant of Isaiah: Death at the Hands of Persons Unknown,” Ex Auditu 31 (2016):  108-120, and is indebted to the work of Jeremy Schipper, Disability and Isaiah's Suffering Servant (Oxford: OUP, 2011).  All Scripture references are quoted in the NRSV.  I wish to thank the staff at Inheritance for their willingness to publish this work and their ongoing efforts to give Asian American Christians voice. 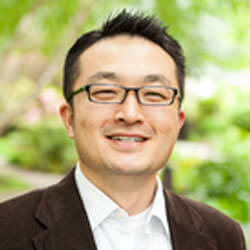 Bo Lim is Associate Professor of Old Testament at Seattle Pacific University. He teaches and writes on the topics of OT prophetic literature, theological interpretation, Asian American biblical hermeneutics, and exile and migration. His publications include a commentary on “Hosea” (Eerdmans) and an essay in the “T&T Clark Handbook to Asian American Biblical Hermeneutics”. He enjoys running, biking, and competing in triathlons.