Yesterday was 추석 (chuseok), or 한가위 (hangawui) as it is known in non-Chinese based Corean. It is a centuries-old festival, honoring the ancestors that have come before us and died, and looking to celebrate the autumn harvest with our communities.

Yesterday, the idea of celebrating 추석 during the pandemics of COVID-19 and long-present heteropatriarchy, white supremacy, and colonialism may seem laughable, maybe even inappropriate or escapist or impossible. For me, however, celebrating 추석 is an act of resistance and deep restoration.

Scarcity is a lie created by capitalism. The reality is that if we understand that we are all created to belong to one another in relationship — not in isolation or separation, not limiting our relationships to those formed by blood or marriage, not in hoarding for ourselves, our own people, not in viewing the things we create and people and nature as objects to use and then dispose of — we would live life abundantly as we were intended.

And yet, we feel lack so much more deeply than we feel abundance as those of us who can are sheltering in place in the U.S.

We feel the lack of justice delivered through our court systems, the lack of financial support from the government as unemployment and bankruptcy increase, the lack of sufficient medical supplies in hospitals and cleaning supplies in grocery stores, the lack of relational energy and spaces as we continuously get burnt out from video meetings, the lack of options to vote for transformative change during this election year, the lack of empathy and consideration for one another’s dignity and safety — we feel all of this.

추석 is not a triumphalist victory over these issues. It cannot resolve the tensions of our grieving world, but it does offer rest and movement towards whole-ness.

추석 is more than just a celebration of anticipation or supplication to deities and ancestors. It is not about wishful thinking or spiritual bypassing that temporarily distances ourselves from our bodily experiences and the physical world. Rather, 추석 celebration must be deeply rooted in and manifest through our bodies.

We have been told that it originated from village folks celebrating the full moon's light, highest around the time of the autumn harvest, to bring about a bountiful harvest once more — but if you listened more closely, you would realize that the women,

for it has most always been women in the 강강술래,

were also singing their hopes and desires for themselves and each other, venting their frustrations, their pain from the hard labor and mistreatment they experienced as working-class women, as women in a deeply patriarchal society that did not allow them to sing loudly, to dance passionately, to go outside at night, to have their bodies as their own.

There are no set lyrics, just an outpouring of heart-words and a continuous response of “강강술래”. As the women clasped each others' hands in the moon's light, the circles they created were broken and snaked around in lines and patterns and rejoined and broken and rejoined once more, adding more and more participants as their feet pounded rhythm into the ground, as they called and responded refrains back and forth, faster and faster and faster.

It has also been told that during the Japanese invasion of Corea in the 16th century, General Yi SunSin used 강강술래 as a military strategy. Corean women dressed in suits of armor and danced around a fire, casting a shadow on the mountain.

And the Japanese scouts were astonished at the shadows, thinking that the Corean troops were much larger in number than theirs. And so, they reported back a large overestimation of the number of Corean troops.

When the women were dancing on that mountaintop, they danced and sang into their more-than-enough-ness.

We have abundance when we are all seen and heard. Not just seen and heard when our bodies are deemed useful or when we are removed from our bodies and bodily experiences. While the women acted courageously in wartime resistance, I also wonder how those women felt, potentially being used by General Yi SunSin for a country that did not truly consider them to be human.

In this dance and song, we are able to feel our bodies as connected to each other as we carry each other’s stories. In joining ourselves together, in continuing to expand our dance circle, the shadows we cast on the mountain cast fear into the heart of the forces that seek our death.

추석 resists separation and isolation by grounding us in community. While it may not be in-person gatherings with lots of delicious food, and we may be by ourselves physically, we are deeply connected to each other through the observance of this day. We experience it as we pay respect to our beloved ancestors, the saints who are no longer with us, whether it is due to illness, time, accident, or violence. And, as in the 강강술래, we break our tightly held circle to widen it, to include more participants. We must understand ourselves as connected to ancestors beyond our cultural, ethnic, racial, and generational identities, because when we enter into relationship with Jesus, we enter into relationship with an abundant, generous family of transnational, intergenerational, and boundary crossing kinships. So, we also honor our ancestors who have been murdered by the state. We hold the names of the many Black lives stolen by police violence, unable to find restitution even in death, honoring their sacredness.

I invite you, during this 추석, to join hands with me and sing in this frenzy of lament and grief and hoping and dreaming.

Perhaps you are dancing to the beat of your heart, thumping anxiously with worry as we head into an increasingly hostile presidential election.

Perhaps you are sharing your song for a reimagined world and present.

Perhaps you are wailing, heart sick with grief over the continued injustice that haunts us over and over, through wildfires, through attempted genocide, through detention and deportation, through stolen land, through global facism.

I will do my best to listen to your call, even if you do not have the words to speak it, and I will respond as we dance our 강강술래. 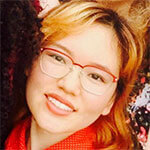 Grace Park (she/her) is your resident jack-of-all-trades, expert-of-none, currently studying for her Masters of Divinity and Theological Studies degrees at Garrett Evangelical-Theological Seminary. She is also a lover of fire noodles, thunderstorms, pimple-popping videos, and (most) all things Christmas.