Claiming and Reclaiming Our Names

It is funny how we rarely speak our own names aloud; others speak them to us, others choose them for us. I was given many names, as we all are.

I was given the name 진, Jin, by my Korean Christian parents when I was born. 진 for truth, truth as in John 8:32, truth as in “the truth shall set you free”, the motto of the university where my parents met.

A few years later, I was given the name Rebekah by my parents when we moved to Ohio. Rebekah, a strong, brave, compassionate woman, Rebekah with a k-a-h, the Hebrew spelling — Rebekah that became Bekah for my close friends over the years. My name is Rebekah, I learned to say, to the sea of blue and green eyes at my first day of pre-school. And as I moved through the social worlds of elementary school, middle and high, it didn’t cross my mind in the slightest to ever consider Jin as anything other than my “passport name”. Sure, names are our own, but names are ultimately meant to be spoken by others, are they not? Why not choose the easier one, the more familiar one? The Christian life is to always place the comfort of others before your own, is it not?

But why Rebekah? I was asked by a professor when I entered my undergraduate years. Why not Jin? With a simple question, she opened up the possibility that Jin could be just as legitimate of a name as Rebekah; I had never considered it. It was remarkable and sad. I had never considered it, never considered introducing myself by the name I had first been given. I had always assumed that Rebekah was easy, familiar — for others. But my name — my name is my name. What meaning, what history did I really want to represent? Who did I want to be?

Reaching past the well-worn Rebekah and Bekah, I found and dusted off this name that held a separate set of meaning, of connotation. My name is Jin, I told my new colleagues in my graduate program. I waffled between “gin” and “진”, assuming that the short i in lieu of the long 이, the Anglicized J in lieu of the J-tinged-with-T-tinged-with-Ch ㅈ was good enough of a compromise. I was afraid of taking up too much space in a place that was not designed for me; I was afraid of taking up 10 seconds of bumpy introduction while others took a smooth and painless three. But who was I compromising for? No, no compromises, I resolved. I’m here, make room for me. I can ask others to be a little bit uncomfortable for me — my name is 진, I corrected myself, and changed my Zoom name to “Jin (jtzeen) Choi”.

My close friends noted my name change on Instagram and wanted to know if I wanted them to move from Bekah to Jin. I was unsure; what did I want to do with Rebekah, this name I had known for 20 years? Would I be selling myself short, succumbing to the pressures of Western supremacy if I held onto my white name? What of the emotional attachment I had built upon Bekah? What of the meanings of strength, resolve, courage that my parents had given me through this second name?

But as it turns out, there should be and are no right or wrong answers when it comes to how we decide to name our own selves. I moved Rebekah to a middle initial, settled on Jin R. Choi. The fact that I ever needed an Anglicized name is a part of my history, and I can wear that honestly. The structures of whiteness demanded Jin to die and Rebekah to take its place, but we have agency to shift these structures that bind, that flatten — so I am holding both Jin and Rebekah together in tension as the truth of my lived reality, claiming Jin and reclaiming Rebekah both for my own, of what I, the name-holder, will make of them.

In my professional circles, where names and bodies such as mine do not belong, I am requesting to be recognized with a name that is difficult to pronounce, asking those in power to put in the work to see me as I am, introducing myself with an unusual name, practicing an everyday living liturgy of showing up exactly as I am, showing up in my truth. For me, it is a liturgy of boldness and resistance, an intentional reminder every time I say or hear my name that I am choosing to show up in a way that proclaims a complex humanity and, ultimately, a vast God: a God of Abraham, Isaac, and Jacob, a God of the Lewises, Johns, and Tims, and also a God of Jin — and the many other Jins, the other Yoos, the Kyungjins, the Donghyuks.

And surely, a God of Rebekah, too. I want to insist on the power to reclaim, to redefine. To eschew Rebekah altogether actually somehow feels like a loss, a surrender to Western supremacy, confirming, in a way, that these names are theirs and that we do not belong. No, I want to hold onto Rebekah, but in my own way. In my personal friendships, I am keeping Bekah, keeping the emotional memory of the name, holding the weight of my Korean Christian heritage that gave me a Hebrew-spelled name despite being far away from actual said lineage, holding the weight of the fact that a second name was ever necessary, holding all of these tensions at the same time — because that is who I am. Furthermore, I know I am safe here as Bekah because these dear friends see me for who I am, know who I am in all of my complexities, my American English and Korean citizenship, and all that is in between.

Names are given, but names are also chosen, are what we make them to be. Ask us our names, know us by our names. I am both Jin and Rebekah, and everything in between. 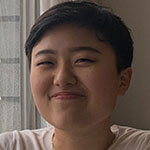 Jin R. Choi (she/her) is a Ph.D. student in Rhetoric & Political Culture at the University of Maryland. Her scholarship currently focuses on globalization, transnational citizenship, power, belonging, and space. Jin is a diasporic Korean Missionary Kid, currently living happily in Seoul, South Korea. Find her at @jinrebekahchoi on Twitter, or email her at jinrebekahchoi@gmail.com.