Demystifying the Dream Through National Parks

My family’s most frequent vacation destination was a national park. I remember the satisfaction of reaching the top of Vernal Falls during a family trip to Yosemite National Park when I was 10. Although the incline steps were relentless, and the path at times was crazy narrow for two-way foot traffic along a steep cliff, the sheer height and abundance of the waterfall was stunning. These memories from my childhood, like watching my dad find the best broken branch as a walking stick, to moments today, when my parents make requests to find the best place to view salmon migrating upstream, have shaped my love for being outdoors.

According to visitor center plaques and pamphlets, federally protected lands through a National Parks System (NPS) were the brainchild of Theodore Roosevelt and John Muir, advocates for preserving nature and famed wilderness buddies. It was thanks to them, apparently, that these beautiful landscapes across the country were being preserved, and now my family and the rest of the public could enjoy outdoor vacations. It never occurred to me that years later, my childhood memories would take on new and complex meaning through remembering the histories of these parks from the perspective of indigenous peoples.

History lessons in my early education told incomplete and severely watered-down stories of the “discovery” of this country by “explorers” and “settlers.” They did not place great emphasis on the cultural extermination, dispossession, and massacre of Native Americans perpetrated by these European colonizers. And there was little discussion of what Native American life was like pre-colonization, let alone what Native American life looks like today.

National parks eventually became the very setting where I would deepen my understanding and responsibility as an immigrant settler in this country. In March 2017, a group of friends and I had the chance to take a backpacking trip to the Havasupai Indian Reservation in Supai, Arizona, in the Grand Canyon. Less than a year prior, the Standing Rock Sioux tribe garnered national attention in the summer of 2016. The tribe built a movement against the construction of the Dakota Access Pipeline to protect their sacred water source and other sacred grounds. The #NoDAPL movement faced militarized violence from police but was supported by generations young and old at the protector encampments. Present-day demands for sovereignty and protection of Native lands were built upon centuries of Native resistance against colonial forces. Native people have always been here and are still here.

Witnessing this movement, and given where I was in my own spiritual and ethnic identity development at the time, I approached this backpacking trip to the Havasupai Indian Reservation with a more critical eye. Walking through the canyons and gazing up at the waterfalls was breathtaking, and I kept meditating on the fact that not only was this God’s creation, but this was the home of the Havasupai, People of the Blue Green Waters, and we had to treat it as such. Throughout our weekend there, I felt myself taking in my surroundings more deeply, treading more lightly, and sitting with the tension of being a grateful tourist but a guest, nonetheless.

The historical information posted around the village was presented from the perspective of the Havasupai, highlighting tribal resistance against colonial acts of biological racism and land dispossession. Reading the plaques that detailed their stories of reclaiming tribal land and lifeways was both empowering and humbling. The connections between colonization and national parks became increasingly clear. Colonial violence against the Havasupai are part of what made the establishment of the Grand Canyon National Park on that land possible, yet this is not widely acknowledged outside of the reservation. Graffiti tags on trail signs that read “Respect existence or expect resistance” said it all: We must protect existence in a way that dignifies all of Creation, humans included, but also resists and dismantles all forms of oppression that threaten this dignity.

Decolonizing the history of national parks

With this new and disruptive perspective of national parks, I wanted to dig deeper. In my grad program, I took a course on decolonizing education taught by Dr. Monisha Bajaj. As the class engaged with decolonizing work by scholars such as Linda Tuhiwai Smith, Eve Tuck, and K. Wayne Yang, among others, I was committed to unpacking how to meaningfully participate in decolonization, particularly of land, as an Asian American immigrant settler. Although my reality as an immigrant settler holds unique intersections as an American-born child of Asian immigrants, I still had to recognize that I am a benefactor of stolen land, and this warrants contemplation and action on the just way forward. I decided to further investigate a decolonized history and understanding of national parks as the subject of my final class project.

Mark David Spence’s book “Dispossessing the Wilderness” was especially enlightening on the subject. It connected the timelines of the establishments of national parks with the expansion of the Indian reservation system through Indian Removal policies from the mid-1800s to the 1930s. It was through this lens that I could now see that the narrative that I learned as a kid of Roosevelt and Muir as the forefathers of the NPS decidedly focused on a theme of American exceptionalism rather than on the seizing of Native land or Native resistance to colonization.

The danger of this incomplete narrative was that it painted an alluring but mythical picture of the American Dream as more than just economic opportunity for settlers and immigrants. The Dream was also depicted as a vast and abundant landscape that was “open” for settling and touring, boasting grand mountain ranges and towering redwood forests in the background. This picture erased Native presence and perspective, such as the indigenous land preservation practices that shaped the land prior to national parks being established. Ignoring these practices also feeds into the myth that national park lands were always free of human settlement and should remain that way.

Decolonizing my relationship to this land

The process of decolonizing and healing my relationship to land has involved better understanding what I had been taught was my relationship to this land as an Asian American. My family’s trips to national parks taught me to value caring for land. This value was reinforced by my evolving faith and pursuit of social justice as a young adult that called me to be a good steward of the Earth.

However, without centering indigenous histories and perspectives, deep down, my relationship to land is still susceptible to repeating colonial attitudes of indigenous erasure. It’s impossible to reflect on my family’s presence in this country without recognizing the influence of the American Dream. The Dream, through its promises of economic mobility for immigrants, encourages a mindset that takes for granted the lands we are on and assumes the right to enjoy them.

At the same time, my experience as an Asian American positions me to understand the need to resist cultural and historical erasure and other forms of dehumanization against my and other marginalized communities. How, then, can I use this understanding to resist indigenous erasure? Do I still support and visit our national parks, knowing their historical connection to colonization?

I’m struck by recent anti-racist protests resulting in monuments of Confederate and colonial figures in our country’s history being toppled and torn down. These actions by Black and indigenous folks were powerful in symbolically challenging the sides of history this country chooses to remember. National parks were created to be monuments of land that choose to remember a history of land preservation pioneered by white American men. What would it look like to reimagine a system of land preservation that honored indigenous sovereignty, practices, and communities?

There is so much that I’m still learning and do not know, but I’m trusting that this is all part of the process of unlearning. I’m unlearning a relationship to national parks and the land I inhabit that overlooks indigenous place names and histories. And I’m learning how to align my resources and actions to support land sovereignty, environmental activism, and other important issues for the present and future of Native peoples.

To heal my relationship to this land as an Asian American immigrant settler, I’m compelled to go beyond individual care for Creation, and pursue right relationships and interdependence with land and with others.(1) Being born and raised in the Bay Area, I used to claim being a Bay Area “native” without active acknowledgement of being on Ohlone land. The Bay is the only place I’ve called home, and my husband and I are new homeowners here, too. Questioning my claim as a “Bay Area native” makes me want to reserve the term for the Ohlone people, or even for the communities of color that have been here for multiple generations but are being displaced through gentrification. Now, I wonder if this term actually includes all of these realities, widening our possibilities for seeing others as part of ourselves.

(1) This call to radically care for each other on and through this land has only become more urgent in the COVID-19 pandemic. The dual forces of the pandemic and systemic racism have disproportionately affected Black and Brown communities, with the highest infection rate per capita in the U.S. being in the Navajo Nation. Please see the links below for ways to help. 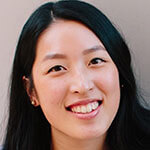 Kristen Fu is an educator in the East Bay Area and just completed her masters in International and Multicultural Education at the University of San Francisco, School of Education. Her work aims to make quality education accessible to and liberating for all, and is fueled by espresso drinks made by her husband/at-home barista, Quess.