Part of 7 of in
By Kenji Kuramitsu
Photography by Ken Uyeda Fong ‍
Mar 01, 2016 | min read
Part of 41: Just a Taste
3 Snaps
3 0 Snaps
Oops! Something went wrong while submitting the form.

AS I STEPPED OUT of the van, my breath seized in my chest. Pained eyes slowly adjusted to blinding light, taking in sweeping, scorched landscape that lit out in every direction.

Ropes of stale wind teased across my face, lifting hot air through my nostrils. I glimpsed snarls of dead green, but there was otherwise nothing: I saw no water, no clouds, not a single sign of life other than our small group who had made this pilgrimage.

Like many Japanese Americans, my family suffered in the desert prisons of World War II. Yet growing up as a mixed race, fifth-generation person in the Midwest, I felt far removed from this West-Coast reality. I understood in a flat, historical sense that something horrific had happened to us, but I recognized the trauma only by the void its silence left.

Like many Japanese Americans, my family suffered in the desert prisons of World War II. Yet growing up as a mixed race, fifth-generation person in the Midwest, I felt far removed from this West-Coast reality.

It had been almost 70 years since Manzanar had closed, sending 10,000 traumatized residents back to empty homes and nests of urban chaos. The camp's gates now hang dumbly in wooden moors, sections of fence and wire standing as stoic wardens of the deserted penitentiary. The land is currently home to a memorial educational center, a reconstructed dining hall and living quarters, several archaeological digs, and a cemetery, housed in an old peach orchard just outside the camp's original fences.

We walked crunching on stale earth toward the graveyard at the edge of Manzanar's bleached skeleton. Sun-washed headstones littered the site, weighting the ground. Paper cranes and flowers in all stages of life were freshly perched on marble frames, highlighting the faded names of those lowered into the soil.

Although the Japanese traditionally prefer to be cremated, the dead were forced to undergo burial here during the war. After the camp's closure, many of these graves were carefully exhumed, the earth opening its mouth to return the bodies of all but six of those originally interred here.

As I walked among empty graves, I began to feel a rising unease, the source of which I couldn't locate until I closed my eyes — it was completely silent. Though I was among acres of open land, there was not a single sound, and it felt like I was trapped inside of a tiny, soundproof closet. I stood still trying to imagine my people, accustomed to lush coastline, being flung into this place of sharp, dry air, how the calls of gulls and howls of traffic must have been so quickly replaced with dusty silence. I had never felt that the eerie quiet of a place could be a form of oppression. My eyes began to run with hot tears.

I had never felt that the eerie quiet of a place could be a form of oppression. My eyes began to run with hot tears.

Our service group met a park employee, who explained to us that he had family among Manzanar's original residents. He told us about the stumbling, terrified women and men who gradually learned to translate desert sands into fertile life, conjuring corrugated streams, wooden bridges, orchards, and fresh springs from an otherwise barren estate. Awed, we began to pore over gardens that once crawled with fruit and greenery, breaking apart the hard earth, pulling dead growth, and casting it aside.

As we toiled, I was swept up in the profoundly sacramental nature of the work. In Genesis, the first person is commanded to care for this earth and its creatures. God gave the gift of life to human beings by raising them from the earth's topsoil; every tree and animal. Sacraments, as Augustine of Hippo taught, are the outward, visible markers of God's inward and spiritual grace. Flowers, fruit, water, oil, bread and wine, wicks and flames, smoke, gardens, bodies, and words are God's unique gifts that are intimately revealed and imparted to humans, the localities in which God manifests God's own boundless self.

But when the first humans chose to turn away from God, God sets the earth at odds with them. Humans would still work the fertile land, but now the land would fight back: brambles, weeds, and thistles would burst from the ground, and agricultural labor would bring sweat to the man's brow. This curse is followed by the story of humanity's Nisei (second generation), when the first human born chooses to murder his younger brother. The Divine hears Abel's blood crying out from the ground, and as punishment God aggravates the life-giving relationship between Cain and the fertile soil.

This Thanksgiving, my aunt told me about the first years of her childhood, which she spent behind barbed wire in an open-air prison named Topaz, in an emotional climate crystallized by terror and machine guns. Since infancy, she has been scarred and suffered greatly because of a traumatic event she cannot even remember. Visiting Manzanar, I too detected the sharp contours of a memory that, while not mine, has fully formed me, and indeed made my living possible. In the same way, I identify with my spiritual ancestors in the Scriptures and their legacy as a prosthetic history grafted to mine.

I too detected the sharp contours of a memory that, while not mine, has fully formed me, and indeed made my living possible.

In the months following my trip, I witnessed all manners of racial injustice that continue to fester in this land. This was the season of Trayvon Martin's stalking and slaying, two months before Michael Brown's killing in Ferguson, Missouri. This was the time of the burning of Black churches, of Laquan McDonald's execution in Chicago, and of Eric Garner's murder in New York. Holding these stories up against my own, I began to sense that these events comprised my heritage as an Asian American as surely as Manzanar, Angel Island, railroads, and sugar cane plantations did.

That spring, I joined an online book club formed to study Black liberation theologian James Cone's "The Cross and the Lynching Tree", which reflects on the trajectory of lynching in the United States and clarifies the theological connections between this phenomenon and the crucifixion of Jesus Christ. Reading Cone's work, I learned that small and large knots of people, desperate to hold onto racial dominance, tangled themselves into a fury and murderously lashed out at the children, women, and men they hated and feared. In the span of less than 100 years, the warped minds of the horde silenced thousands of Black lives at fairgrounds and picnics, at police stations, and on church grounds — the largest incident of such violence culminating in the lynching of 17 Chinese Americans in 1871.

Approaching the depths of this violence fostered in me a spiritual weariness that I did not expect. I started to feel weak, tired, impatient, furious, and intolerant of the racial ignorance from which I had only recently emerged, as if my identity was in the throes of growing pains that still ache to this day. Mostly, I felt betrayed — that my pleasant suburban education had committed a great trickery on my behalf by insinuating that racism was cleanly abolished by Martin Luther King, Jr. long before I was born.

Approaching the depths of this violence fostered in me a spiritual weariness that I did not expect.

Because Asian migrant journeys often mean that we are relatively newer arrivals to American shores, it can be challenging for us to discern our roles in a racial economy built on only two colors: black and white. One of my classmates shared recently that before she came to the United States, she was told by her friends in Korea that Black people were inherently dangerous. She subsequently intentionally avoided Blacks on the streets of our city until our "Worship and the Arts: #BlackLivesMatter" class led her to Google the history of African American subjugation in the United States.

Troubled by the brutal pictures she saw of wound rope and burning flesh, Mi-young created a painting: a lynching tree, with gnarled red and black branches; the entire seminary community pressed their fingerprints onto it during a public worship service. Mi-young also began to reimagine the grotesque photographs she witnessed by sketching large crosses into these bloody tableaus of death, soothing twisted bodies into positions of rest, seating them on the wooden arms of the cross.

New York schoolteacher Abel Meeropol responded to a picture of the 1930 lynching of Thomas Shipp and Abram Smith by writing a poem that later became known as "Strange Fruit". Popularized by the jazz artist Billie Holiday, the ballad opens with a haunting scene as the narrator comes across a plant that is slowly revealed to be a lynching tree: "Southern trees bear a strange fruit, blood on the leaves, and blood at the root. Black bodies swinging in the Southern breeze, strange fruit hanging from the poplar trees."

A perverse sacramentality simmers beneath these words: lynchings are outwardly visible, physical signs of the invisible and underlying systemic racism that has formed our land. Upon encountering a crucified body, the full lethality of America's hidden racism is unmasked, and our ears are bent back toward the blood crying out from the ground — toward pierced hands and broken windpipes, poplar trees and desert fruit.

Like the first family, once we encounter the brutality of human violence, we cannot simply return to seeing the world the way we used to. Our trauma leaves us chemically altered. Yet, rather than fostering hopelessness, remembering these fatal histories only makes us more abundantly aware of the wider ecology of human relationships. I see that in the depths of human suffering, God empowers God's people to resist difficult circumstances with creativity, and that God is steadily at work in all the places we never expected: in deserts, in family conflict, and in the shadow of the lynching tree.

God empowers His people to resist difficult circumstances with creativity, and that God is steadily at work in all the places we never expected.

As I turned my heavy heart to Manzanar, overwhelmed by the silence, the very act of remembering this history plants seeds of healing and hope — hope that we might bear sweeter fruit in the times to come. 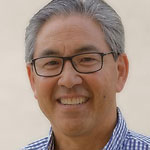 Ken Uyeda Fong grew up in Sacramento, CA and graduated with a bachelor’s degree from UC Berkeley. He completed his M.Div. degree in 1981 at Fuller Seminary, the same year he was called as the associate pastor of Evergreen Baptist Church of Los Angeles. He is also now the executive director of Fuller’s Asian American Initiative and assistant professor of Asian American church studies.