Part of 1 of in
By Kwok Pui-Lan
Photography by Michelle Kwon
Aug 01, 2017 | min read
Part of 57: The Power Within to Create the World Anew
80 Snaps
80 0 Snaps
Oops! Something went wrong while submitting the form.

For the seven years I studied theology in Hong Kong in the 1970s, I didn’t have a single female professor or academic role model.

I never imagined that I would spend a lifetime in academia and would later become the president of the American Academy of Religion, the world’s largest professional guild of religious scholars.

Growing up in a working-class family, I became aware early on that I had to study hard to have better opportunities in life.

The 1970s were a time of ferment and protest in many parts of the world. Students in Hong Kong demonstrated against corruption, police brutality, and racial discrimination under the colonial government. The slogan of the student movement was “Know Your Motherland, Concern About Society”. The student protests made me keenly aware that theology should not be an armchair exercise and must be related to people’s struggles. Liberation theology and various Asian contextual theologies appealed to me because they emerged out of social and political movements.

The student protests made me keenly aware that theology should not be an armchair exercise and must be related to people’s struggles.

An ethics professor exposed me to the works of feminist theologians, such as Mary Daly and Rosemary Radford Ruether. Daly’s sharp criticism of androcentric symbolism in Christianity and patriarchal structures was significant for me because of my family background and the drastic social changes in China at the time. During the Cultural Revolution (1966-1976), Confucianism was attacked as both feudalistic and patriarchal, and women and men wore the same blue or gray Maoist outfits.

Since there was no female professor in the theology department, my college professors invited me to pursue a Master in Theology to begin a teaching career. I offered one of the first courses on feminist theology in Hong Kong, titled “Women and the Church.” After teaching for a few years as a junior professor, I was encouraged to study for a doctorate degree at Harvard. But there was a problem: I had become the mother of a 2-year-old girl.

Going abroad to study for a Ph.D. is challenging enough by itself. Thirty years ago, I didn’t know any married women with young children who did this. But with the encouragement of my spouse, friends, and colleagues, I decided to embark on this journey. My spouse also decided to further his studies, and our family arrived in Boston in 1984.

I chose Harvard partly because it is well known for its Chinese studies. At Harvard, I developed my intellectual curiosity because so many famous scholars passed through its doors. I had the opportunity to listen to Alice Walker, Jacques Derrida, John K. Fairbank, Mieke Bal, and many other top scholars who were not in the field of theology. As one of the few Asian students at the Divinity School, I decided to craft an educational program that would fit my interests and research needs.

Since I hadn’t had a female professor in Hong Kong, I took advantage of learning from leading feminist theologians and biblical critics in Boston, such as Mary Daly and Elisabeth Schüssler Fiorenza. Their intellectual breadth and their uncompromising critique of the patriarchal church and society impressed me. But I knew that feminism in the Third World would be very different from the kind of feminism espoused by white, middle-class U.S. women.

I knew that feminism in the Third World would be very different from the kind of feminism espoused by white, middle-class U.S. women.

While reading white feminists’ works, I noted what they had said about the Third World situation, lamented over their silences, and tried to discern how their scholarship would provide methodological insights for my own work.

During that time, Katie Geneva Cannon gathered a group of women of color together to discuss issues we faced in the church and academia. Those gatherings provided a reality check for me; as an international student, I did not fully comprehend the racial dynamics that operate in U.S. society. Together with other Asian and Asian American students and pastors, I co-founded a network, which later became Pacific, Asian, and North American Asian Women in Theology and Ministry.*

After teaching for a few years in Hong Kong, I returned to the U.S. to teach in a divinity school. There I encountered racism and prejudice in the classroom associated with my race, gender, and accent. Some of the students who were older than me doubted if I had enough knowledge or experience to teach them. A white female student questioned why I had given her a B instead of an A.

As the school began to engage more in anti-racism discussion, I became aware that racism took place at the personal, interpersonal, institutional, and cultural levels. What I had experienced at the school was a microcosm of the prejudice and discrimination of our larger society. Many students had not had an Asian professor, let alone a woman teaching them systematic theology.

Many students had not had an Asian professor, let alone a woman teaching them systematic theology.

Encountering racist behavior as a teacher often creates self-doubt, for one is never sure whether it is a racially motivated incident or whether one really does not perform up to the bar. When I have doubtful moments, I rely on the support of family and friends. Throughout my professional life, I have continuously created and maintained different kinds of professional networks for mutual support and collaboration. Since I have benefited from my own mentors, I devote time to mentoring the upcoming generation of students and junior faculty, especially the women among them.

I have had many women students who felt intimated by the study of theology, since it is abstract and philosophical. They were also challenged in writing theology papers. I have had to help them unpack layers of internalized oppression as women growing up in a male-dominated society. For centuries, women have been told that we can’t think or that we don’t possess rational faculty. For a long time, theology was a domain that belonged to the clerics and male academics. It has only been since the 1970s that a greater number of women gained access to theological education.

For centuries, women have been told that we can’t think or that we don’t possess rational faculty.

I have been very active in various academic guilds and professional groups. When I was approached to run for the presidency of the American Academy of Religion, I had certain doubts. There would be an election and I would run against an esteemed colleague. What if I lost? I recalled Hillary Clinton’s graceful concession speech after she had lost to Barack Obama to be the Democratic Party’s presidential nominee. Even though she had lost, she said, the hardest glass ceiling of sexism had “about 18 million cracks in it,” thanks to the number of Democrats who voted for her.

If I won the election, I would join only seven or eight scholars of color who have become the president of the American Academy of Religion, and would be only the second Asian to hold the honor. Clinton’s loss was so painful. But if she could face losses in such a public way, what did I have to lose?**

As I look back at my career, I feel very blessed to have been given many opportunities to lead and to serve, and I am grateful for my family’s support along the way. I believe the measure of one’s life is not so much dependent on personal success, but on how much one contributes to one’s community and society. I hope I have made the path easier and opened the doors a little wider for those who come after me. The world we live in is full of challenges. I hope the next generation of Asian Americans will rise up to the occasion and break more glass and bamboo ceilings and be leaders in ways we can only dream of.

I hope I have made the path easier and opened the doors a little wider for those who come after me.

** See my blog, “Running for the President of the American Academy of Religion,” kwokpuilan.blogspot.com/2011/11/running-for-president-of-american.html. 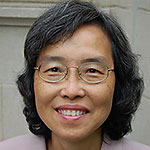 Kwok Pui-lan has served as William F. Cole Professor of Christian Theology and Spirituality at Episcopal Divinity School. Her publications include “Postcolonial Imagination and Feminist Theology”; “Introducing Asian Feminist Theology”; and “Discovering the Bible in the Non-Biblical World”. She is also the coeditor of “Off the Menu: Asian and Asian North American Women’s Religion and Theology”.