“I have been disappointed with the Church. I do not say that as one of those negative critics who can always find something wrong with the Church. I say it as a minister of the gospel, who loves the Church; who was nurtured in its bosom; who has been sustained by its spiritual blessings and who will remain true to it as long as the cord of life shall lengthen ... There can be no deep disappointment where there is not deep love.” (Martin Luther King, Jr., “Letter from a Birmingham City Jail”)

“I been working hard, I been searching for God.” (Logic, “Under Pressure”)

For the past few years, I’ve been a pastor in search of a home. As a Filipino American, the idea of home is unclear to me. The Philippines is my ancestral home and I feel close to my roots and relatives there. My theological lineage can also be traced back to specific people, churches, seminaries, and American denominations in the Philippines. But many of my concerns are markedly American, even though I was born in Canada. Despite having lived in the States for most of my life, I get regular reminders of my foreignness, especially here in the Midwest.

Despite having lived in the States for most of my life, I get regular reminders of my foreignness, especially here in the Midwest.

That’s why growing up in my parents’ church proved so formative for me. In that community where I spent three decades, God’s grace to me was steadily mediated through Filipino accents, dishes, stories, and bodies. So when my search for Filipino American theological writings repeatedly came up empty, I made it my goal to collect our churches’ stories and identify our contributions to American Christianity at large. It was a path that seemed to choose me, and as I’ve continued to grow in this, so have the opportunities to write, speak, and lead.

But it began to feel strange, even inappropriate, for me to continue leading my Filipino American church in the same ways my father had, especially as historic Black/white racial tensions resurfaced here in Chicago. In ways I did not expect, my growth as a Filipino American Christian led me into several clarifying conflicts, ultimately pushing me to resign from my role as lead pastor and leave the church where I had spent most of my life.

Now that I’ve left home, I understand that some of the most divisive conflicts in our country took on a more concentrated form in my community because these divides characterize the very identity of Filipino American Christianity.

At the heart of Filipino American identity are complex struggles rooted in our ongoing colonial history. The colonial mentality doesn’t just manifest itself in the Filipino obsession with skin-bleaching and imitating American or Korean celebrity cultures. The Philippines became “Asia’s Christian nation” through colonial violence and exploitation, and many of these same forces continue to center whiteness — whether Spanish or American — in our churches’ theology and aesthetics.

For Filipino American Christians, colonialism can keep us indebted and blindly loyal to white leaders and institutions. We’re taught to be suspicious of ministries led by people of color, and as long as our white leaders give us even marginal support, we’re happy to be “the help”, invisible and voiceless as we are in non-church contexts around the world. White people run all the big-name Christian organizations, and their churches set the standards for our own.

For Filipino American Christians, colonialism can keep us indebted and blindly loyal to white leaders and institutions.

All this began to come loose for me in late 2015 after a video of the Laquan McDonald shooting was publicly released and our city erupted in conflict. McDonald, a Black teenager on the west side of Chicago, was shot 16 times at close range by Jason Van Dyke, a white police officer. The case garnered national attention and divided communities along the usual party lines. By this time, I had spent a few years living and studying in predominantly Black spaces, and the struggles and strength of Black friends began to challenge my theology and ministry.

I wasn’t surprised when most of my church members failed to empathize with victims of Chicago’s violence. After all, new immigrants have many of their own legitimate concerns like gaining stability and supporting loved ones throughout the diaspora. And my Filipino American home church was in the suburbs, 30 miles away from the city. But this distance from Chicago’s Black community didn’t stop many of my church members from proudly aligning themselves with law enforcement and against its critics.

More than this, they had strong prescriptions for how Black people — even Black pastors — should behave, citing Romans 13 in ways that perpetuate the model minority myth and pit people of color against each other. This set the tone for how our loyalties would conflict the following year.

In the fall of 2015, I presented my first academic conference paper, examining Dietrich Bonhoeffer’s transition from German nationalist to Hitler critic, pointing out parallels that would be obvious to anyone reading Bonhoeffer today. By the time then-candidate Donald Trump’s campaign was in full swing in 2016, I had been criticizing his positions publicly for about a year. As far as I knew, nobody in my church seemed to mind during the Republican primaries. But the dynamic at church changed dramatically during the general election because my criticism did not.

Much has already been said about the psychological consequences of Trump’s victory on people of color, especially for those whose safety was immediately in question when he won. High stress remains an occupational hazard for pastors in minority communities.

But the toughest part for me wasn’t my own status as an immigrant, pastor, husband, new dad, doctoral student, or any combination of these. I was on edge because several of my congregants were secretly undocumented, and I wasn’t sure who else knew or what we would do if they were suddenly detained.

Several of my congregants were secretly undocumented, and I wasn’t sure who else knew or what we would do if they were suddenly detained.

Adding to my confusion, some of these undocumented church members were themselves endorsing Trump and parroting his inflammatory slogans. But even if our undocumented members had never disclosed their statuses to me, it’s well-known in our community that many U.S. Filipinos — an estimated 300,000 — are undocumented, or as we say, “TNT” (Tago nang tago or “always hiding”).

My church turned out to be comprised of many immigrants who were openly pro-life yet fiercely supportive of deporting their own kababayan (fellow Filipinos) and church members. In the biblical sense, the 2016 election was apocalyptic for me. It didn’t usher in a resolution or end of any kind, but the legacy of our colonial self-hatred was uncovered to me in a new way.

It became obvious that in many ways, our church’s theology proved to still be colonized by white Evangelicalism, just like the Filipino Catholicism against which it allergically reacts. I wanted to see my church freed of this, but I was still struggling with it myself. It seemed like my years of leading and teaching had not made much difference in how our church loved its neighbors, and blind spots in my own formation and training may have contributed to these problems.

Through these struggles, I was reminded that immigrant churches have great potential for resistance. Historically, Protestants in the Philippines have distinguished themselves from the Catholic majority by emphasizing the Bible and the priesthood of all believers. Because of their roots, Filipino American Protestants and Evangelicals take pride in being literate (in English), innovative, adaptable, and democratic. So my home church developed a form of Filipino Christianity that resists clericalism, traditionalism, and other vestiges of Spanish colonialism.

My home church developed a form of Filipino Christianity that resists clericalism, traditionalism, and other vestiges of Spanish colonialism.

But we also need to wrestle with ways that white Evangelicalism has made us more individualistic and complicit in the mistreatment of other communities of color. And because Filipino Protestantism defines itself in the rejection of anything resembling Catholicism, we overlook our tendency to replace Catholic practices with those uncritically adopted from white Evangelicalism.

As the founding pastor’s son, there were countless reasons why I should have remained in that church. After all, it was the only church I had ever belonged to and the closest thing to home I had. But I remembered the regret of my Filipino friends who had both the plan and means to leave town after high school, yet they chose to stay home instead because their parents offered new cars to keep them there.

For me, staying in the church would have meant sacrificing my deepest convictions. Or I would have caused even more pain by staying and forcing my perspectives and pace on others. My home church made me proud to relate, think, and lead as a Filipino American, but I wasn’t welcome to challenge aspects of our church life that still need to be redeemed. Ultimately, I couldn’t lead a community where I didn’t experience community.

To make the most of our resources for resistance, we need our churches and leaders to move beyond this posture of fear. Instead, our resistance will be redemptive when we learn to embrace and serve others through it. It seems fitting that our new church plant team closed the year on the south side of Chicago, worshipping and praying alongside sisters and brothers from different backgrounds and parts of the city.

To make the most of our resources for resistance, we need our churches and leaders to move beyond this posture of fear.

Unlike our parents, we don’t have the same “home” to recreate in our church. So perhaps it’s even more true for us than it was for those who did it before us — our home is more made than found, and it will be ours when we make it for others. 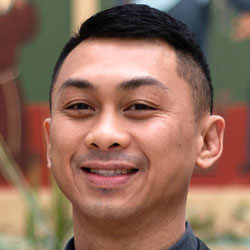