In the seventh grade, I saw a video of a Tongan man, Matangi Tai, who was brutally attacked by police in Arizona. He later died due to a suspicious “unknown cause”. The lack of transparency regarding the cause of his death, along with the physical abuse he experienced prior to his arrest, were both alarming factors to my community when considering the history of terror between people of color and police.

After witnessing that event, I routinely finished my homework quickly after school in order to reserve a time to run in place in my room — some days, I ran for hours trying to outrun the possibility that I might end up like Matangi. In the mornings, I would wake up an hour earlier than my siblings to fix my hair. I’d take every spare moment to work on my school assignments in order to be the best. I made an effort to build up a decent amount of strength, intelligence, and stamina to combat my fear of brutality at the hands of law enforcement. I believed that distancing myself from my roots would distance me from my chances at an unjust death.

I believed that distancing myself from my roots would distance me from my chances at an unjust death.

At the time, I was naive and under the impression that I was surviving; I assumed that I was doing everything right. In reality, I was only suffering further from my own blind obedience to society’s expectations for me as a woman of color — which negatively impacted my relationship with my people, my faith, and my community.

As a young Tongan woman in the California Bay Area, I grew up in spaces where I did not often see my own image reflected in my surroundings. I attended school and church where the demographics were predominantly white, I was surrounded by depictions and stories of God that fell into an unrepresentative, problematic mold, and I eventually lost the tongue of my ancestors and took on the words of my people’s oppressor.

Despite putting an immense amount of effort into my schoolwork and getting perfect grades on tests and assignments, I was still seen as only “smart for a brown girl”. Once I turned 10, I learned how to use a straightening iron and grew a strong liking for my hair, but only when it fell in flat, long, thin strands. Eventually, I stopped referring to my father as Teti, the Tongan word for father, and called him “Dad” in public spaces in order to assimilate to my classmates. I avoided the sun during outdoor activities so as not to grow darker, and only felt beautiful when my natural features resembled those of the white women I saw in magazines on trips to the grocery store.

I avoided the sun whenever outdoor activities arose so as not to grow darker.

Although I wasn’t exposed frequently to my own people and culture outside of my family, I was raised on one of the greatest Tongan resources and creations: the tapa cloth. Tapa cloth is a thick, matlike covering used in religious and cultural ceremonies to symbolize sacred ground and to display the grueling weeks of work that go into hand-stitching natural leaves into a woven masterpiece that would be used for years to come. When done right, the cloth is nearly unbreakable, tightly woven, and perfect to place upon the soft grounds of the islands in Tonga, or as a simple floor-covering in homes. However, when one is unable to adequately weave the leaves together, the cloth fails to serve its purpose and falls into useless remains. Similarly, in Tongan American culture and society, there are holes and empty spaces that result in a tense and divided community. At times, these holes go deep enough so as to bury our own people.

When one is unable to adequately weave the leaves together, the cloth fails to serve its purpose and falls into useless remains.

As a growing seed in my community, I have witnessed others directly fall into some of these “holes”. The abysses in my community result from themes of white supremacy and colonization in our society and culture. And as my people have immigrated to America, these themes have become habitual, taught, and inherited for generations. My case of internalized racism is anything but unique — it’s commonly seen amongst my own people, and in many communities of color across Asia and in the Pacific. As I have seen it, our distaste for dark skin, curly hair, native tongues, harsh accents, and cultural practices are truly reflections of our own insecurities. As a whole, we were taught and given the reiterated message that anything far from whiteness is toxic and shameful. We cast this belief and racist ideology onto ourselves, and those around us. We were raised to see Black folks as the antithesis of beauty and value, so when we see ourselves grow a resemblance, we eradicate any possible traces of it. We hide, we shame, we hate, and we pass it on.

We were raised to see Black folks as the antithesis of beauty and value.

I grew up seeing my own people and people who looked like me in positions lacking power or great joy. I often saw Tongan athletes or celebrities glorified — people of color who “made it out” of their communities into the halls of an upper class, white society were deemed as happier and gifted with empowerment that was supposedly void in the communities they fought so diligently to leave. However, I’ve realized that the belief that strength, beauty, and light cannot be found in our own people is a narrative taught to people of color in order to suppress resistance to white supremacy and obliterate any themes of self-empowerment or growth in our communities.

My people have suffered in a cycle denying us of our right to claim beauty, self-worth, and liberty. We have given up our time, energy, faith, and money in order to preserve an order of whiteness that is unattainable and murderous of our own progress and success. We’ve dug our own trenches with the gloves of systemic racism. I have spent years searching for a way out, failing to realize that the ladder out of my own abyss cannot not be built by anyone’s hands but my own.

My people have suffered in a cycle denying us of our right to claim beauty, self-worth, and liberty.

My generation will be an era of resistance. Unlike those before us, Gen Z has been gifted with technology — which has served as a resource to me and countless others on our journeys to self-acceptance and decolonization. After experiencing direct attacks of racism and discrimination in my early years of high school, I have gained a lens that has allowed me to see past the layers of hate and shame placed upon my people, and rename those toxic themes as repercussions from systemic racism and its hold on communities of color. My people are powerful. We embody change and light. My generation will be a generation of healing.

Through social media and the ability to connect with mass audiences, I believe my generation will be able to move forward and beyond the themes of Eurocentric beauty and self-loathing that once plagued those before us through the endless educational resources and diverse media we have at our disposal. Our ladders will be built out of self-love and our newfound knowledge, we will come to see God in our own communities, and we will eventually return to our natural existence and homes with pride, rather than shame. My generation will no longer accept the inherited self-hatred passed down amongst our people. We will be the ones to bury it.

We will come to see God in our own communities, and we will eventually return to our natural existence and homes with pride, rather than shame.

In this era of youth activism and awareness, my people will finally engage in the resistance movements we have silently watched along the sidelines for years. We must engage — not as an act of service, but as an act of survival. Intersectional resistance is the only way forward; it’s the only way we will get to see our future and dismantle the oppressive systems suffocating our own. I know my people will finally come to make progress, for we will be fighting the hands robbing our liberty rather than each other. 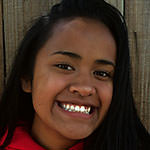 Lucy Siale is a 17-year-old, Tongan, student organizer who was born and raised in the Bay Area. She’s been actively engaging in community events for social justice for over eight years — and she has helped to mobilize her community for multiple causes from racial inequality to women’s rights. As an instigator for change, Lucy has used her social media platform to educate allies and marginalized folks; along with raising awareness and organizing actions for issues that often arise. She hopes to give that same platform to people of color, undocumented immigrants, LGBTQ+ folks, and other marginalized groups through her advocacy.