Forgive Our Trespasses as We Forgive Those Who Trespass Against Us

华文: The Chinese language is like a wound on my soul. It has been the source of countless anxieties, innumerable fears, and a pervasive sense of cultural inauthenticity. It was an inescapable part of my Singaporean education because I was born ethnically Chinese, and Chinese was not a language either of my parents naturally spoke. My parents spoke English at home, both to each other and to me. Elsewhere, they might unleash their Cantonese or Hainanese dialects, or even dabble in a smattering of Malay, but Chinese was a mold that I had to squeeze myself into at the cost of an arm or a leg, or in my case, the tongue of my mother and her mother before her.

In the early days of learning Chinese (or having it inflicted on me), I used to whine with the pettiness of a 5-year old: Why did I have to do this? Who is responsible for making me suffer through this? The answer was always the same: No one. It was just something that had to be done. Of course, tracing far enough back in history, you could isolate certain geopolitical factors and maybe even identify individual legislators who had put it into black and white, but to 5-year-old me, it was simply “a thing that was done”. On the grand scale of things, learning Chinese really wasn’t the worst thing that could have happened — far from it. But the same logic holds true for other far more heinous injustices. Injustice only sometimes belongs to an individual; mostly, injustice is like learning a language was for me: “things that are done”.

In the Anglican Church that I attended in Singapore, we always said The Lord’s Prayer before the Eucharist. One line said, “Forgive our trespasses as we forgive those who trespass against us.” I never understood its significance until I read the unequivocal moral standard in Matthew 6: “If you do not forgive others their sins, your Father will not forgive your sins.”

Fast forward 10 years, when as a 14-year-old, I had my fair share of growing pains. Learning Chinese was only one of them. I had trouble fitting in to the school I was attending, a school well-known for attracting the wealthy and elite. I hadn’t stopped to consider then that at least part of the reason I could not fit in was my socioeconomic background, even if it was merely the way people talked and the topics they talked about. I did not stop to consider that being widely exposed to the world and current affairs was also a privilege, a privilege hidden beneath the mask of intellectualism. In addition to that, I grew up without siblings, cousins, or playmates my age and as a result, suffered from chronic self-esteem issues and social anxieties.

As a 14-year-old Christian trying to deal with the hurt I was experiencing, I tried to forgive others so that I could receive the forgiveness of God, but the same question constantly re-emerged: Who was I to forgive? I am fortunate that I only dealt with growing pains. But there are others who perpetually suffer from economic exploitation, others who deal with long-term mental health issues and are not acknowledged by society, others who are considered irredeemable for one reason or another. The kind of systemic injustice that we see today is not very different in kind, even if it is monumentally different in degree. There is diffuse responsibility, but concentrated hurt.

The conscience of the world is increasingly turning away from paying attention to individual faults to collective sins. Perhaps the sins of an individual are something that we cannot afford to forget about, but the Christian tradition, particularly with its confessional booths and emphasis on grace, has fleshed out the role of forgiveness in healing, overcoming, and salvation for an individual’s sins. These resources are starting to seem inadequate when faced with the question of collective guilt. The forgiveness of an individual carries with it certain associations: the admission and feeling of guilt, the hope for reform, reconciliation. These associations belong entirely to the realm of psychology. But they make us wonder if forgiveness is even possible when the hurts have arisen from systemic injustice. What is required of the institution, of the system, or of the culture before we can forgive it? What is required of us to even be able to extend forgiveness?

It is easy to think, as a Christian Asian student in the United States learning about the effects of colonialism and western culture, that I drew the short stick and that I must find some way of forgiving this culture that has brought me both pain and prosperity. But that would be to ignore the other half of the picture, the half where, through no direct action of my own, I also participate in the systems and cultures that continue to wreak havoc and pain in the lives of others. One example of this is Muhammed, a Bangladeshi migrant worker in Singapore, who lives on less than a third of the pay of a graduate and is in debt as a result of traveling to Singapore for work. He continuously faces visa problems and permanent financial insolvency because of a workplace accident. The very home I currently live in was built by him and many others like him.

From whom shall I beg forgiveness? Yes, I volunteered at a free clinic that provides medical and legal care to migrant workers in Singapore. It is a small gesture that helps, but it does not expiate my complicity. The injustice is not remedied, and it continues, but I have neither the means nor the resolve to remove myself from the civilization that perpetuates it. To beg forgiveness means to acknowledge that nothing that I can do will completely render justice. Yet, how many migrant workers do I need to serve or apologize to (not that they want or would appreciate it), before I can receive forgiveness? Perhaps only God can forgive me now.

C.S. Lewis, in his “Essay on Forgiveness”, tried to make the point that when we seek forgiveness, we are more than likely to seek to be excused, rather than ask to be forgiven. These excuses are very similar to the mitigating reasons that accompany our expectations of forgiveness. It could be the recognition of guilt or the genuine desire to change. We think, “I should forgive, if ... ”, but no such mitigating reasons exist for systems, for “things that are done”.

Yet, if we are to truly forgive, that is “looking steadily at the sin, the sin that is left over without any excuse, after all allowances have been made, and seeing it in all its horror, dirt, meanness, and malice, and nevertheless being wholly reconciled to the man who has done it”, mustn’t we first be willing to accept the forgiveness of God? Understanding that we cannot be forgiven unless we forgive implies that we cannot receive the mercy we will not extend to others. The basis of forgiveness cannot be the psychological association with forgiving a repentant individual, but the fact of the offer of our own forgiveness. Philosopher Jacques Derrida gestured toward the impossibility of forgiveness when he wrote that forgiveness forgives the unforgivable. Forgiveness acknowledges its own impossibility in being extended to others, but for the Christian, its impossibility is first acknowledged by God for whom nothing is impossible.

I speak Chinese now. I accept it as my heritage and a part of my identity. But it never occurred to me that culture could be made, not inherited, or that a culture that is made can always inflict violence on those who take it up. Accepting this is a kind of forgiveness. Seeing it as a part of me despite the circumstances under which it came about is a kind of forgiveness. I venture to think that “Forgive our trespasses as we forgive those who trespass against us” offers us a clue as to what forgiveness means in the facelessness of racial, economic, social systemic injustices. They are faceless because we, too, are faceless without the willingness to extend mercy. We cannot receive forgiveness without a face. And when it comes to systems, we must put a face on even the largest systemic injustices, but the first face we must offer is our own. Perhaps that is what it means to beg forgiveness from God. 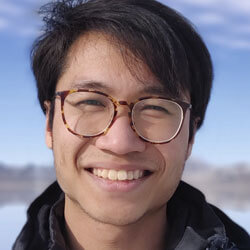 Bradley Yam is from the sunny island city of Singapore and is a junior at Yale University studying ethics, politics and economics, and computer science. He loves diving and hiking. In his spare time, he likes learning about science, technology, C.S. Lewis, and food.