Part of 8 of in
by Jimmy Liu
Illustrations BY ALICE YOUNG
Mar 01, 2015 | min read
Part of 30: The Body Issue
1 Snaps
1 0 Snaps
Oops! Something went wrong while submitting the form.

A FEW MONTHS after my divorce, I was able to enjoy the musical “Wicked” in Los Angeles. During the climax of the story, Elphaba and Glinda reflect on their complicated relationship by singing “For Good”, a farewell duet in which they earnestly ask, “Who can say if I’ve been changed for the better?” This question was also rattling around my brain as I was processing my recent divorce. It is a question I have often visited and revisited as a single father.

After all, divorce is something God hates (Mal 2:16), so I wondered if this ugly and destructive thing could possibly change me for the better. After the divorce, we decided that our kids would stay with me. I remember a point in time when I looked at the four of them and thought, “Okay. Now what?”

I remember a point in time when I looked at the four of them and thought, “Okay. Now what?”

My oldest, Jubilee, turned 15 earlier that summer, and for better or for worse, I had always counted on her to take care of her siblings. Since she is five years older than her next sibling, I tended to refer to the children as “Jubilee and the kids”. Now that I was a single dad, she had many opportunities to babysit her siblings, which for the short term was a win-win; I was able to take care of things outside the home, while Jubilee earned some extra cash.

But there was already a problem brewing that became magnified with my now-single status. Jubilee was growing up too quickly. Her motherly instincts meant that she wasn’t able to enjoy the normal life of a teenager. We also depended on each other for emotional support, which is fine for a daughter to expect from her father, but probably not so much the other way around.

In August 2011, I gathered the kids and all of our stuff and we moved from Northern California to Southern California. Joseph started fifth grade two weeks after we arrived in Diamond Bar. I was most worried about him, but entering a new school as the big kid on campus probably gave him a boost in confidence. When Joseph was only a few weeks old, his mother had returned to work and I stayed at home to care for him. After taking Jubilee to school, Joseph had my full attention, so whenever he cried, I was there.

As a single father, I wanted to continue to give him all the attention he had received during those first years of his life, but as more siblings were added to the mix, my attention became divided. My time and energy were already like a thin layer of ice, but after the divorce, things began to crack.

My time and energy were already like a thin layer of ice, but after the divorce, things began to crack.

Jacob had three years to enjoy being the baby of the family before his little sister arrived. With Jubilee taking on a motherly role, Jacob was relegated to the center of the three younger siblings; that shaped him to be competitive, yet diplomatic. This latter trait manifested itself in a struggle to show equal affection to his biological parents in the midst of the changing and challenging circumstances of his breaking family.

Divorce creates a giant chasm right in the middle of a family, and if you don’t choose a side, the menacing hole will swallow you up. Even though Jacob didn’t want to choose a side, I wanted to be the “better” parent so that if he ever did decide to jump, he would land with both feet on my side. But this would require dedication and intentionality, and at this point, I lacked the strength to stand.

Divorce creates a giant chasm right in the middle of a family, and if you don’t choose a side, the menacing hole will swallow you up.

Juliette was a couple of months away from her fifth birthday when the divorce happened. She cried along with everyone else, but I wonder how much she really understood. My therapist warned me to not treat her as a pet, which is the tendency for youngest children. I didn’t quite understand since I already had a cat who curled up next to me at night. But a cat is just a cat, and after countless nights of going to bed alone, I missed human contact. Besides, what was the harm in allowing Juliette to crawl into bed with me after she had a nightmare? She needed the comfort and I wanted to be needed.

Single parenthood was really hard — as it should be — since it wasn’t part of God’s original design. In the perfection of the Garden of Eden, God deemed everything good, but regarding one thing he said, “It is not good that the man should be alone” (Gen. 2:18a ESV). For God to call something not good before the fall certainly draws attention to itself.

Single parenthood was really hard — as it should be — since it wasn’t part of God’s original design.

As a single parent, I certainly felt this state of not-goodness. This is not a knock against singleness in general, but it is the difficult reality of single parenthood. To bring children into the world (in the conventional way), you need a man and a woman, and you assume that this same man and woman would be there to raise those children.

God recognized this problem right away, so in the same breath, he offered his solution: “I will make him a helper fit for him” (Gen. 2:18b ESV). This is not to say that imperfection existed in the garden before sin entered it, but rather that we got to hear God’s thoughts about how He was going to finish what He started. We get to watch the story of his most beautiful creation unfold. His grand plan was to make a helper for the first human.

It’s unfortunate that this word in English has come to mean something small and secondary. However, the Hebrew word here is ezer, a word used to describe God himself: “Our soul waits for the LORD; he is our help and our shield” (Ps. 33:20 ESV). “My help comes from the LORD, who made heaven and earth” (Ps. 121:2 ESV). For a single parent to not have this kind of help is like missing a piece of God himself. There is divine power and beauty in this help as ezer is used to describe God when he saves Israel.

An ezer came to me as it had once come to Adam (minus the surgical rib extraction), and for the first time in my life, I had found a true partner and helper. Melissa and I were married in April 2014 and she has helped me in many areas of my life, including areas in which I didn’t even know I needed help. In my previous marriage, my ex-wife and I had co-habited while living separate lives, maintaining an unspoken pact to remain distant. That previous life had existed in black and white, while my current marriage is painted in vivid colors.

Regarding ezer, I like how Matthew Henry defined it: “She was not made out of his head to rule over him, nor out of his feet to be trampled upon by him, but out of his side to be equal to him, under his arm to be protected, and near his heart to be beloved.”

“She was not made out of his head to rule over him, nor out of his feet to be trampled upon by him, but out of his side to be equal to him, under his arm to be protected, and near his heart to be beloved.”

She has been the catalyst to bringing affectionate physical touches back into the home, not unlike Maria bringing music back into the von Trapp family). These hugs and touches were something the kids and I had been craving, but nobody really knew how to articulate or initiate it. Melissa also started a system of sharing words of encouragement around the dinner table, and just like our souls had craved the hugs, our hearts longed to hear those kind and uplifting words.

All of these experiences amount to change for the better, which is exactly how the dictionary defines “help”. Sometimes you need a little darkness to see a source of light. Single parenting has given me a healthy perspective on my past and a humble approach toward my future.

Single parenting has given me a healthy perspective on my past and a humble approach toward my future.

In “Wicked”, we are provided the backstory to Elphaba, the wicked witch we all know and hate, and she lives up to her reputation to the casual viewer. However, her song with Glinda reveals the essence of ezer by showing there is more to the story as they sing: “Because I knew you ... I have been changed for good.” 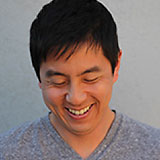 Jimmy Liu enjoys stimulating conversation over boba, getting lost on his bike, and analyzing fine films. He has an MDiv from Fuller Theological Seminary and lives in Diamond Bar with his wife Melissa and four children.