Her hands form dough, which she rolls into flatbread. She makes homemade tea every day, boiling black tea leaves with water, milk, and a sprinkle of fennel seeds and crushed cardamom.

Life’s circumstances carried her across an ocean to another continent. She held my 14-month-old hands while getting off the plane, and one month later, gave birth to my sister. My mother taught me about a different kind of honorable work: how to survive and thrive in a country that was not her own.

The Immigration and Nationality Act of 1965 changed previous immigrant quotas that favored those from Western and Northern European nations, with 70% of all immigrant slots going to the UK, Ireland, and Germany.  This legislation paved the way for immigrants from Asia and Africa to come to the U.S., and would mark the beginning of a demographic shift. Today, in the U.S. there are more than 40 million people who were born in another country — more immigrants than any other country in the world.

The Immigration Act of 1965, formed in response to the civil rights protests of the 1960s, changed the trajectory of the previously signed U.S. Immigration Act of 1917, which had resulted in an “Asiatic barred zone”, barring immigrants from Southeast Asia, including Indians in British India, the Pacific Islands, and the Middle East. Now that the path was open, my mother, father, and I landed on the shores of New York in one of the earlier waves of U.S. immigration. My father, already a trained physician and in high demand in India, was welcomed to the U.S.

In addition to $25, their clothing, and a few precious belongings, my parents carried dreams and hope, resolve and grit. Their plan was to live in the U.S. for a brief time, save money, purchase needed medical equipment, and take the equipment back with them when they returned to their home village in India. As it turned out, their next visit to India would be seven years later. It would be the only time I ever met my maternal grandfather.‍‍

‍She wrote stories in Hindi that were published in an Indian paper, but those papers were left behind, because there was no space to carry them in her luggage. All of her papers were later destroyed during an attack from Pakistan. She had been a schoolteacher and writer.

She submitted an essay for a writing contest sponsored by the BBC Radio in London. Before leaving India, she heard the radio announcement that she had won. On her journey to the U.S., she stopped for a layover in London, intending to pick up her award from the BBC, but last-minute changes and obstacles prevented her from collecting the award. To this day, that honor remains a valued accomplishment.‍

On the way to their new home in the U.S., a sparsely furnished apartment in New Jersey, they stopped at the grocery store and were introduced to peanut butter, jam, American-sliced bread, and a few other unfamiliar groceries.

Twenty-three days later, my sister was born, leaving my mother to manage two children on her own: a newborn and me. She came to this country knowing no one, was immersed in a new culture and lifestyle, and was on her own with a toddler and newborn. ‍

She had studied English in her school in India, but learned fluency by watching “I Love Lucy” on a small black and white TV. (Lucy’s antics certainly transcend language.) At some point, she became assimilated into a new culture. ‍

After New Jersey, we lived in South Dakota, Louisiana, and Alabama — we were often the only Asian Indian immigrants living in small towns. My mother encountered a learning curve each day, simultaneously living in the present place while longing for the home she had left behind.

We tend to think of work in the usual definitions, citing our jobs, our careers, and our paychecks. But learning to live in a new country is also hard work.

God meant us to do all kinds of work, which includes pulling weeds, pulling teeth, or pulling out the tangles in a daughter’s long hair, as my mother used to do for me.‍

She never stopped working. Her work simply changed. She did not return to teaching, although she volunteered at our school occasionally. She’d bring treats on our birthdays and distribute them to our classes. Sometimes, she was invited to talk about India. She’d wear a sari, bring items from India, and share about the culture and food. She still writes, documenting the stories of her past, of what it was like to be an immigrant.‍

My family faced discrimination, harassment, and microaggressions as immigrants. We were told to “go back to where we came from”. Learning how to stay, live, serve, and survive took work. We lived with the “thousand daily cuts” of being left out, among some people who saw us as “other” instead of belonging. Resolving to stay and thrive required hard work.

Over the past few years, I’ve begun asking my mother for stories of her home, her immigration journey, and her life in the U.S. I’ve heard traumatic stories of partition, which my great-grandfather lived through, as he and his family fled to India during the tumultuous months. I’ve heard stories of her peaceful childhood growing up on my grandfather’s farm, where he harvested carrots, potatoes, oranges, and sugar cane. My mother is the oldest of six, with four brothers and one sister. She was the first to leave India and settle abroad. She and my father were trailblazers in their village, leaving behind large supportive family networks, heading across the ocean where they knew no one.

Many of us value the stories of the successful mother-immigrant-turned CEO, the entrepreneur, the Ph.D., the Asian American woman who became famous, or the one who won an award. Those stories exist. They are good and should be celebrated. Because Asian American women are the poorest immigrant group in New York City, we long for stories about overcoming hardship and poverty. Those stories deserve to be told and known, as well. Each of these stories holds merit and meaning.‍

Her story is the story of many first-generation Asian mothers. It is neither one of fame nor of accolade, but is one of surviving, assimilating — especially in small towns — living among few Asians. She is one of the mothers who worked out of the spotlight, scraping together meals, saving coins, sacrificing for her loved ones. A mother who lived in one culture with her children, but harbored a sense of homesickness for her own home, her own native comfort food, her relatives, the sounds and sights of her village streets, and the trees and plants of her hometown.‍

Our mothers walked in in-between spaces before we did, the spaces in between two cultures, two languages, and two lives — the life they thought they might live and the life they actually lived. They fought for survival, and they struggled to make a way for us, their children and future descendants. In the middle space between two cultures, they learned a new way. We, the next generation, also walk in our own in-between ways — in a different sort of space. I wonder if I would have such resolve if I had to do what they did.

The hardships and sacrifices of our mothers provided a foundation to move forward — no matter how imperfect — it is a starting point. Despite the trials of living in the U.S., they persevered, carving out a path through the wilderness of a new world, so just maybe our way might have fewer brambles and thorns. We still have our struggles, but some of the paths have been trodden: we can speak up now in a way we couldn’t previously, constrained by the push to assimilate and the pressure to succumb to the stereotype and myth of the model minority.‍

She had a stroke, then knee replacement surgery, and now moves more slowly due to arthritis and sciatica. Her memory is still good, but pain is a regular companion.‍

When I was young, I wanted to hide any connection to my Indian ancestral village, where cows roamed freely, where open sewers and dirt roads were common, where there were regular electrical blackouts and water had to be boiled for hot baths. As a young child growing up and trying to “fit in” in the U.S., I didn’t want to appear different and tried to separate myself from what I thought was “backwardness” — though most of my friends had no idea what my village in India was truly like.

But I have come to realize, years later, that the ingredients of this strength to survive were born out of the dust of the Global South. Out of scarcity and loneliness emerge abundance. From lack develops desire and the grit and fire to make a life where you are alone, where there is no other family to stand with you or behind you, where those around want you to fail or even tell you to go back to where you came from. You place a stick in the red clay ground of America, and you make it home.  ‍

Her topic for the BBC writing award was the question, “What are three things you’d like to leave behind as a legacy for your children?” Her answer, written and submitted in Hindi, consisted of these three traits: self-confidence, self-dependence, and self-control. Those were qualities she also needed to survive as an immigrant.‍

“Is there anyone among you who, if your child asks for bread, will give a stone?” (Matthew 7:9, NRSV)

Not the immigrant mothers. They not only gave us their homemade bread, but everything they had. ‍

Rolling out flatbread is unlikely to win her accolades from this world. Neither is making tea, or combing a child’s hair. But it is honorable work. It is a destiny. And it is good. 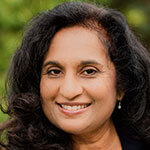 Prasanta Verma (she/her) is a freelance writer and poet. She was born under an Asian sun, raised in the Appalachian foothills, and currently resides in the upper Midwest. She holds an MBA and an MPH, and is a regular contributor to The Contemplative Writer and The Mudroom. She writes about identity, belonging, and culture, and her work has been published in Propel Women, (in)courage, Relief Journal, Barren Magazine, and more. You can connect with her on Twitter @VermaPrasanta, Instagram @prasantaverma, and her website prasantaverma.com.