JOSHUA HARRIS LIED TO US.

If you were a young conservative Christian man or woman growing up in the 1990s and 2000s, the Maryland pastor's bestselling book on Christian relationships, "I Kissed Dating Goodbye", was the de facto Lost Book of the Bible.

The book was defined by its "11th Commandment": Thou Shalt Not Romance Without the Intent to Marry. Casual dating, he argued, is "training for divorce", teaching teens to switch partners on a whim. Instead of dating, the book suggests "courtship": a system of rituals and conversations whereby a young Christian man — and of course it's the man initiating — who is financially, spiritually, and emotionally prepared for marriage approaches the father of his potential Christian bride, asking permission to "court" his daughter.

This system emphasizes commitment and community as crucial components of a lasting relationship, and deservedly so.

This system emphasizes commitment and community as crucial components of a lasting relationship, and deservedly so.

But for me and my young churchgoing friends, both boys and girls, this emphasis on sober-eyed, grimly purposeful conversations tended to drive us crazy.

There were the rebellious: toeing the line while Mom and Dad were watching, but sometimes at school, probably at summer camp, and definitely in college, abandoning any attempt to keep up with rules so starkly pitted against the combined urgings of our hormones, favorite TV shows, music, and the dating culture our other friends seemed to alternately be terrified of or enjoy. As these freethinking spirits jettisoned the restrictions of conservative Christian culture, including courtship, they often wound up largely abandoning the personal practice of their Christian faith.

On the other hand, there were the timid: young men and women so daunted by the marriage-filled purpose looming over every potential romantic partner that they approached every interaction with stammering mouths. For any 16-year-old guy, no matter how secure or carefree, asking out a crush is awkward and scary. Doing so while burdened with the knowledge that you are essentially asking her parents for her hand in marriage? Super fun.

A close friend of mine encountered this latter problem from the other side. During her junior year in college, a fellow student in her InterVarsity chapter approached her saying that he had been attracted to her for some time, and had been praying for months about asking her out. Not only that, but he also approached their fellowship staff, other student leaders, and even his grandmother, asking for their "prayers and discernment". Alarmed and overwhelmed, she said no.

I can't blame her.

Reflecting on my own teenage fits of rebellion and bouts of timidity, I've come to realize that I implicitly picked up two dangerously unchristian messages.

First, I learned to not receive grace for my own mistakes, to lack faith in God's ability to work despite my shortcomings, and to not leave room for growth and self-discovery.

Courtship emphasizes that romance is serious — something to be undertaken with vision and forethought. This is certainly true, but so is the fact that failure and personal growth go hand in hand. Without an equally strong emphasis on grace and room to make mistakes, the purposefulness of courtship often morphs into agonized guilt over what I perceived to be "relationship failures" — whether rejected date proposals or relationships that ended in breakup.

The Christianity I know preaches that men and women are broken. Only God is perfect and God's perfect love is what transforms and redeems our failures, allowing us to grow. Yet, the message I had often internalized about romance was to not date until you're ready to marry, and once you're ready, make sure you find the right person to start a family with, court her, and get married. ASAP.

The Christianity I know preaches that men and women are broken.

I was unable to receive grace. Anything outside of these steps, or moving along them too slowly, felt to me like tacit admission of personal failure, which added on to the burden of unmet expectations. But with grace, every mistake is a chance for both parties to grow in character and experience.

But with grace, every mistake is a chance for both parties to grow in character and experience.

Second, I began to believe that words (e.g. "I am Christian") speak louder than actions (i.e. living a life of grace, hope, and faith). In other words, abstract labels define people, instead of character and personal connection.

I now realize that I've been reducing relationships to a system of closed-ended questions: does she go to church? Does she pray regularly? Does she read the Bible? If yes — jump all in! Pursue her passionately. Ask for her hand in marriage. Have her meet your parents!

Communicating, working out mutual attraction, and talking over mutual values and interests — these factors have been secondary, if I considered them at all.

This isn't completely Joshua Harris' fault, nor is Christian culture all to blame for these blind spots. It's my own problem, a common human struggle that transcends religious and ethnic cultures — seeing people as projections of our own expectations, rather than fellow human beings.

It's my own problem, a common human struggle that transcends religious and ethnic cultures — seeing people as projections of our own expectations, rather than fellow human beings.

This same weakness crops up across the spectrum of human nature: "bootstrap" conservatives objectify workers and immigrants, while radical progressives demonize anyone whose agenda fails to live up to their standards. Pickup artists reduce intimacy to a series of conquests, while "nice guys" (and girls) place women (and men) on pedestals of expectation that no real person could ever match.

Stereotyping others based on certain identifiers takes less time and emotional investment than treating people like individuals. It's why brand managers identify "target demographics" instead of spending marketing dollars to reach every potential consumer. But it's also why police profile entire groups of people — ethnic minorities, the poor — as "high risk". It may save time and energy to objectify others, but what we gain in efficiency, we lose in softness of heart.

The model of "Christian relationships" I had been taught did nothing to alleviate the problem. A single identifying trait of "Is she ëChristian'?" took precedence over a whole spectrum of values and personality traits including social justice, language, culture, and gender roles. Little surprise, then, that as my "Christian" relationships progressed, they inevitably wound up hosting a wide spectrum of miscommunication and incompatibility.

A single identifying trait of "Is she 'Christian'?" took precedence over a whole spectrum of values and personality traits.

So I decided to opt out.

This next season, I'm trying something new: getting to know girls by spending time with them, instead of pursuing long-term commitment based off of assumptions. It's pretty basic — and a sad reflection of my lack of relational maturity.

And yet, as I ask myself what I'm actually looking for in someone, I've started to strip away the identity buzzwords, such as "Christ-follower", "Artist", or "College-educated", that I used to rely on, and instead ask, observe, and engage with a complex fellow human. Getting to know her — her quirks, passions, hypocrisies, and beliefs.

I've started to strip away the identity buzzwords that I used to rely on, and instead ask, observe, and engage with a complex fellow human.

I'm well aware that the Bible tells us not to be "yoked unequally" in relationships. But there are Christians who view the world cynically, without hope. And there are non-Christians who seek healing, finding beauty in the God of the broken, a savior of the hurt and needy. Is it any less unequal to date a Christian whose understanding of gender roles, social issues, activism, and culture don't match my own views than to date a non-Christian whose beliefs and perspectives do?

The answer, of course, is that I'm creating a false dichotomy: either date a non-Christian who I'm compatible with, or a Christian who isn't. But there's a more fundamental point behind my experiment of dating without labels: I want to see the woman sitting across from me for who she is, not who I expect her to be.

I'm a work in progress, and this is an experiment in process. At the moment, I have no answers; I just know that I'm tired of buzzwords, expectations, and projections limiting my potential dating relationships. Perhaps this season will be a romantic disaster movie, and I'll wind up heartbroken, compromised, and jaded.

But, in this moment, my willingness to date outside of the "Christian" world feels like one way for me to reject the blanket labels that I've often used to insulate and streamline my interactions with the real and complex people around me.

By approaching a woman regardless of who I expect her to be, and choosing instead to discover who she is through conversation, life, and seeing each other in new situations (i.e., dating), I'm learning to value her and to be real with myself. Ultimately, I hope to discover the goodness and beauty of God in places and people that I would have written off before.

I hope to discover the goodness and beauty of God in places and people that I would have written off before. 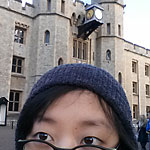 Ann Lee is a Los Angeles native. She is trying to be more diligent about updating her Instagram account @annleeann.