In the Shadow of the Shrine

As far as I know, the miniature house-shrine still perches on the corner of the wet market. I’d been in Malaysia for 14 years, and up until last year, I’d never looked inside. Next to the food truck that sells roast pork and the other one that sells water spinach bunched in rubber bands, the gilded three-walled shrine squats on its haunches over the street. In the evening, before walking home, aunties come out from the shop-lots to cradle their joss sticks against the wind and lay plates of pink kuih at its foot. I can’t recall when I last saw someone do that, but every morning, the shrine finds new gifts, new petitions.

It hadn’t occurred to me to research Malaysian Chinese shrine-keeping; I was researching imperial history at the time. Ming armadas and wars and neocolonialism. The respectable sort of Chinese studies that make it to culture fairs and film. But when I was in my own neighborhood, the roads kept leading back not to empires or fleets of treasure ships, but homeward. To home religion. I squatted on my heels and peeked in.

I’d seen shrines like these all my life growing up, sprouting up in shop-lots, the basements of malls, the sides of rivers and parking lots.

It looked like the entrance of a hobbit hole. A little ceramic figure beamed out on his stool, his smile pacific. With his hands in his green sleeves, he wore something that looked neither Chinese nor Malay nor Indian. I almost expected him to lean out toward me, tip his hat, and invite me in for tea. Like Gandalf in Bag End, I thought. I’d seen shrines like these all my life growing up, sprouting up in shop-lots, the basements of malls, the sides of rivers and parking lots. Invariably a little plate of sweetmeats or a sandpit for incense sticks lay at the entrance, and inside, a plaque or figurine or icon sat, their name plastered in gold ink.

My research had brought me back to Malaysia after three years in Michigan. It was good to be home — one of two homes, anyway. I was on the heels of the cult of Zheng He, the famous Muslim Ming admiral the overseas Chinese kindly decided to deify. In the temple devoted to him in metropolitan Penang Island, you can still see the foot-shaped prayer cards tied to the balcony, asking for good exam results, lucky love lives, or auspice at a son-in-law’s new job. Crisscrossing the country to observe his cult, I found myself directed by locals to the little red shrines I’d always seen but never noticed. It hadn’t occurred to me to study their multiplicity, their regional differences, the names of the spirits, gods, and saints they commemorated.

To visit or be near a holy shrine was to be near a saint himself — a prism into the heart and mind of God.

Research yielded context — like the shrines and temples for Zheng He that dotted the countryside, these were keramat shrines, each an outpost of an interlacing system of local cults stretching from Northern Malaysia through Singapore and on to Indonesia. Keramat, from the Arabic, were not Chinese inventions at all, but Muslim Malay and aboriginal. Before most Chinese had landed on Malaysian soil, the tombs of Sufi mystics and the aboriginal places of spiritual power were acknowledged with shrines. Devotees paid their respects. This was syncretistic Sufism, where saints mingled with the aboriginal animists and Hindu-Buddhist temples. To visit or be near a holy shrine was to be near a saint himself — a prism into the heart and mind of God, and a place where God’s power could be passed physically onto the visitor.

My own ancestors came in not too much later — with their kitchen gods, earth gods, sea queens, and saints. A Chinese soldier of great renown could be deified here in this soil. Or perhaps a local Hokkien Kapitan, or a woman who lives on the coast. These divinities also joined the ranks of the Muslim saints, the spirits of the wood and the water. They found a home here with the immigrants who had trickled in before them. The same foot-shaped crater that the Chinese declared Zheng He’s footprint is still revered as the pawprint of Hanuman, Indian Malaysian Hindus would say. Keramat shrines weren’t just places of divine power, but places where the mysticism rooted in many traditions overlapped and interlocked, binding people to their homelands far away and to the soil of their new homeland here.

Faith and mysticism in my Chinese family still emanated from whiteness, was mediated through their lens, and was refracted onto me.

No one had told me this before. I’d spent my life flap-jacking between Montana and Malaysia and Michigan: 21 years of third-culture angst and learned impostor syndrome. I’d always been looking for heroes — embodied mythologies that represented me and the strange immigrant worlds I straddled. In our Protestant Christian home, this was difficult. Jesus was white; the Christian pastors our own Malaysian pastor kept inviting were white Australians. And the local shrines? Something between superstition and abodes of demons, my grandfather would pronounce with a certain sureness. Faith and mysticism in my Chinese family still emanated from whiteness, was mediated through their lens, and was refracted onto me. Growing up, my Muslim friends expressed something similar: an erosion of Sufi mysticism through the advent of Saudi-style orthodoxy, backed by the federal force. It was this imperial hamfisting that ultimately repressed the vibrant villages of gender-nonconforming opera singers in the north in the 1970s. It was this force that had encouraged Malays to forsake the shrines. Instead, the Chinese and Indians took their place to tend the houses of the gods, sweep the leaves, and lay the fruit at the door. Empire has many faces.

My months of keramat research opened a window into a Malaysian past still extant in the present, and a Malaysia present that foreshadowed a Malaysia Optative that I hoped could be. Malaysia had become home for my ancestors, a place where my people could sustain not only their livelihoods but also gods and ancestry, physically and mystically bound to the land. Malaysia was not the empires that come and go — the Dutch, the Japanese, the English. My ancestors did not subscribe to imperial religion, but religion that resists empire, that survives occupation and the persecution of refugees.

I see hope in that religion. I like to think that my ancestors — the LGBT Malaysians of ages past, the saints of the church, Americans of color — are also entering into the glory of God. That their bodies in the ground also wait deification, as they sanctify the earth and water of my homeland. And that just as I kiss the icons of saints, I can kiss my grandmother and observe the divine. And that, I suppose, is what keramat shrines are for — to be close to the land, to ancestry and posterity, to God Godself. A mirror not only into the past, but a door left ajar into the future.

I have to be aware of the ways non-aboriginal Malays have appropriated and broken into aboriginal pasts without acknowledging our own complicitness in empire.

I say this with caution. I don’t want to pretend the mysticisms I’ve inherited are pliant to my needs or beliefs. No one ever said the spirit world would be tractable. That’s a white people idea: that the wild gods of wood and stone can be press-ganged to serve empire — even the empires I embody as an American. Likewise, I have to be aware of the ways non-aboriginal Malays have appropriated and broken into aboriginal pasts without acknowledging our own complicitness in empire. But I daresay the mangrove intricacy of Malaysian mysticism doesn’t take kindly to colonizers. Its pantheon of drowsing spirits, wali saints, and gay artist villages doesn’t lend itself to unified government. It does not serve monolithic nationalism, does not yield to the manipulation of predatory imams or pastors across the sea. It is not a pliant tradition, but it is mine. I and 29 million Malaysians share in that: the Sufi mystic missionaries, the Chinese admirals, the builders of the Batu Caves. And all this while honoring the aboriginal traditions of Malaysia woven into this little land on the edge of oceans. I don’t believe in queering Malaysian mysticism; that is, subjecting it to the sunny liberalism of American colonization, however progressive. Malaysian mysticism has always been subversive, always included its many sexualities, has always been ours and not theirs.

And I should like to believe that religion need not always be empire. That there are doors and gay saints and myths in my own ancestry that have eluded the snare of British anti-sodomy laws, the flogging of lesbians under Syariah, the pillaging of Aboriginal communities by logging companies. I should like to hope that the strange red huts of incense and oranges and ceramic gods are not just vestiges of a past, but kaleidoscopes into a possible future. A prophecy of what my homeland can be, can grow to be. That we, too, may be raised with the wali, the friends of God; may take and eat of this land; may come back, Malaysian-Chinese-‘Murican-gay and all, and come home. 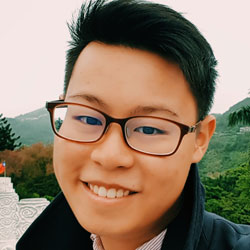 Joshua Chun Wah Kam regularly speaks out of turn about gay shit, shuttling between Malaysia and America, his two homes. He writes when he can, drinks when he shouldn’t, and bakes pies when the oven works. He’s currently posted in fair Ann Arbor, MI, studying the intersections between sexuality, ritual, and mysticism in Southeast Asia. Joshua has recently learned he’s the winner of the Epigram Books Fiction Prize, a Singapore-based pan-Southeast Asian prize for new authors. His novel, “How the Green Man Saved Pahang, and Possibly the World”, will be published this July.