Journey’s 1980s hit “Don’t Stop Believin’” is a refrain that often played in my mind growing up. But I related more to the small-town girl rather than the city boy, so I changed the gender pronouns.

Finding my sense of place in a small, rural, oil, and coal mining town of 2,000 in Colorado wasn’t easy, especially considering I was adopted in 1975 from Vietnam and raised as an only child by white parents who eventually divorced and my mother (who I lived with) remarried another white man. Besides excelling academically (not the most popular activity growing up), I played the “wrong” sports: cross-country and golf. My Asian body was certainly smaller, skinnier, and slower than the bodies of my peers. A midnight train going anywhere sounded pretty good to me.

I thought I would find my “anywhere” at college and that I would be able to explore my cultural roots more than I had been able to growing up. (To their credit, my parents never hid that I was adopted, but it wasn’t talked about much either. I was often told I was “normal” when I was anything but.) Early in my first semester, I walked into a gathering of Vietnamese students, full of optimism that I would finally find what I had been missing after years of not seeing my face and body reflected in the people around me.

I signed in, walked into the large classroom, and encountered two young, female, Vietnamese college students. I said, “Hello.” They looked me up and down, sized me up, and said something to me in Vietnamese. Not sure I heard them correctly, I responded with, “Huh? I’m sorry ... ”. It was repeated. I said, “I’m sorry, I don’t speak Vietnamese.” They giggled to each other and then said, “Well, then you’re not really Vietnamese.” Then they turned and walked away.

I had felt such overt rejection before: people calling me a gook, telling me what I could major in because I was Asian, insisting I was only good at school because I was Asian, interrogating why I didn’t know martial arts, in addition to a host of other model minority Asian stereotypes typical of growing up in the 80s. But it was always from non-Asians, usually whites. Never had someone of my own skin color, someone who I believed would welcome me, rejected me in such a way.

I left the meeting. I never returned. I was embarrassed and ashamed. I felt lost. I felt alone.

A few months ago, I had lunch with a Vietnamese friend. At work, there are a small number of us who share Vietnamese heritage, whether as immigrants or children of immigrants. I am the lone adoptee. Fellowshipping with them provides a space to lament racism, share the diversity of our experiences, take a moment to not look over our shoulders, and simply be present with one another. But in jest, this friend of mine called me the “whitest Asian” she knows. It took me back to that moment in college, walking into the Vietnamese Student Association meeting. Included, but always reminded I never fully belonged ... stirring feelings that I was not and still am not good enough.

I ignored the comment, not really sure how to respond, and moved on. I don’t know if she noticed how much it stung in the moment and I’ve never told her. I know in my head she was just joking and in some ways, I imagine she was partly jealous that my white upbringing grants me access and opportunities that are closed to her, jealous of the ways I could better speak the language of our white colleagues when she could not. In the coming hours and days, I tried to blow it off, telling myself that I was past this and that it didn’t hurt. But it did. It cut deep. It reminded me of those two Vietnamese girls over 20 years ago.

I didn’t give up trying to find my “Asian” place. I befriended other Asians and even dated some, including Chinese adoptees or some who were mixed race. I read up on Vietnamese culture. But the rejection haunted me. I tried to bury it and went about doing my best in my first year of college in classes, with friends, and by my involvement in Christian ministry.

Over time, though, I associated less and less with people who were Asian. It wasn’t motivated by any kind of stereotypes or derogatory views; I just didn’t want to get hurt again. I moved from friend group to friend group, but mostly settled into an unhealthy romantic relationship with a biracial Japanese-white woman. Adoption — that place in between race, country, culture, and generations is where I resigned myself. I took solace in the Broadway show “Miss Saigon”, bawling my eyes out the first and second times I saw it, believing my birth mother was like Kim, making the ultimate sacrifice, believing I owed it to her and my birth father to make the most of my opportunities in the U.S. of A.

And I did make the most of them: I married a wonderful white woman who understands how my adoption shapes me, I earned a Ph.D. and teach at a top university, I travel the world conducting research on and speaking about international adoption identity, and I have three amazing children, including a son adopted from Vietnam.

But I’ve never shaken those two Vietnamese girls who reminded me that I’m not good enough to be a part of their community and culture.

The midnight train represented an escape from hopeless circumstances: leaving the small town toward an unknown but hopeful and optimistic future. For me, that future was a place to belong. I didn’t find it in college or in other Asians, so I instead sought education, success, reputation, and publications, hoping maybe these would provide that place.

But even in my achievements, I cannot escape the echo of not being good enough. A former boss called me an “honorary white” person and insisted I could not claim to be “really Asian” because I grew up with a white family. After giving a lesson on privilege during Sunday School, a church member told me in all earnestness of their surprise to hear that I had faced racism since “I just saw you as white.” This “compliment” undermined my racialized experiences.

Yet again, when I brought together some Asian male colleagues in my department to share in solidarity and fellowship, one of them from South Korea asked in all sincerity, “You call yourself Asian?” — surprised I would claim that as part of my identity.

As I did in college, I’ve tried to find others to connect with. Men from church or work — Black, Latinx, white. But relationships take time and affinity and connection. And after spending time initiating or attending men’s small groups at church or other social gatherings, I see these same men not inviting me or I watch the events on their social media feeds about outings we had all talked about doing together but no one told me when it was scheduled. I realize that my inclusion only goes so far. I’m not unwelcome, but I’m not invited either.

Along the way, I’ve had to come to terms with the limitations of my adoptive parents. I love them and am grateful for all they have provided, but they have not chosen to journey with me in this for a variety of reasons.

I don’t know if it’s because of my race or my culture or that I just haven’t lived in this community long enough, but I do know that in many ways, I’m still looking for that midnight train to anywhere.

“Working hard to get my fill. Everybody wants a thrill. Payin’ anything to roll the dice, just one more time… Don’t stop believin’.” The infectious tune sparks unending optimism and inspiration that hope is worth never giving up on. Don’t stop believin’, even if you’re not sure what is next. Take that midnight train going anywhere.

I’m tired, if I’m being honest. I’m tired of the Asian community rejecting me and telling me I’m not good enough, questioning if I have fully earned the right to call myself Vietnamese or Asian. And I’m tired of trying to live in a white world that interrupts me, excludes me, and directly and indirectly tells me that my masculinity isn’t, well, masculine enough.

I’m tired of living in between.

Now, my energies are focused on my family and home. My home is where I belong, where I can be American and Vietnamese, white and Asian, strong and sensitive, masculine and feminine, a believer and a doubter. Here is where I can belong, somewhat free of the worries of race and culture and privilege, but always shaped by them. It is also where I can create a place my wife and teenage girls and adopted son can belong as well.

But I won’t stop believing. I’m going to roll the dice, just one more time. 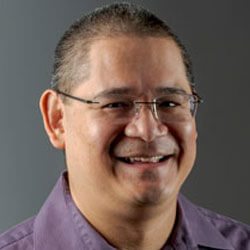 Robert (Bert) Ballard, Ph.D., is a Vietnamese adoptee evacuated during Operation Babylift in 1975. He is an associate professor at Pepperdine University in communication where he uses narrative to study adoptee identity. He has published two books and is an internationally sought out speaker on inter-country adoption. He attends Conejo Valley Church of Christ and also has a video on Buzzfeed playing Detroit Become Human (just Google it!).