Learning to Love Her Was Never a Straight Line

You came from a different space and time, when marrying a good man was a worthy, Biblical dream to strive after. You came from Baptist Bible studies in Tagalog after work hours and from cultural Catholic traditions, neither of which prepared you for the storm of a daughter who emerged from your womb.

You married a strong-willed, stubborn, hardworking man, a man whose passion for God felt like the blazing sun — the confidence and conviction with which he spoke drew you to his warmth. Your own faith held a passion akin to a fireplace hearth, one that you quietly tend to with your morning Bible devotions and Sunday services.

It should have been no surprise when you birthed children whose own passion for their Christian faith grew like a wildfire. Fire begets fire — and you proudly passed on this torch of faith to your daughter and son.

And your daughter was no less faithful in her devotion to God than you were — poring over books by theological bigwigs, filling up notebooks with scrawled thoughts on Bible texts, becoming a Bible trivia whiz, attending Sunday school and youth groups and Vacation Bible School, and eventually becoming a student leader in parachurch campus ministry.

You and your husband watched joyously as your daughter grew to care so much about the Word you both love so dearly, as she grew to love God as deeply as you both hoped she would.

In a way, this family life was the stuff of dreams.

Somewhere along the way, during those troublesome teen years, you learned that your husband’s stubbornness was passed on to your daughter — but his convictions about womanhood were not.

And it was somewhere in the beginning of those teenage years that her rebellion began.

You believe wholeheartedly in submitting to your husband in a hierarchical Biblical marriage, and you tried to lead your daughter in the same direction — but to your chagrin, she refused to follow.

Amidst the joy of watching her grow, this particular development begins a years-long war and you find yourself acting as mediator between two people you love deeply.

You become an ally for both sides of this war, hearing her father’s laments over your daughter’s defiance and listening to your daughter’s rage over the perceived oppression of her body. Your daughter confides in you about crushes and dating, and you try to lead her toward the path you followed yourself, a path that you believe leads toward God — a chaste courtship with a man. You dream of seeing her married. You pray for a man of God to come into your daughter’s life, at the right time, in the right place.

Your daughter grows into a body with curves that refuse to flatten and discovers the dangerous ideologies of modern-day feminism. Her growing curves and young feminine mind refuse to be forced into straight lines, cloaked in baggy T-shirts and shapeless long skirts. She fights the shame she feels from hearing her father tell her that her skirts are too short, her shirts too tight or too revealing.

You feel her anguish and you see the irrationality of your husband’s rule. But it is even more tiring to fight your husband than your daughter, so you implore her to keep the peace in the house, to comply with the expected standards of modesty that her father holds with an iron fist.

She complies, but not without slamming doors and rage-filled tears.

Then, you encounter the unimaginable. You remember glimpses of it from earlier years.

You’re climbing into bed with your husband, and he tells you, gesturing towards the boxlike desktop computer on the desk beside the bed:

He sounds disappointed and anxious.

“I confronted them about it, and both of them denied doing anything.”

You take this information in, somewhat horrified, knowing it’s far too early for your babies to be learning about sex and knowing that neither you nor him are ready to open that can of worms. Not yet.

What you don’t know is that your daughter’s classmates are mentioning words they don’t fully understand, repeating jokes with innuendos that make her curious. Bras. Lesbians. Kissing. She remembers those T-shirts your Bible study friends wore in protest, right around the time the government legalized gay marriage: “Man + Woman = marriage”

Somehow, she knew you and her father would not want to talk about it — or rather, she didn’t want to get in trouble. And she knew asking about girls kissing girls would only lead to trouble.

It was a fluke — your husband was vacuuming their room and saw her journal open on her bed. You come home with the kids and he greets her with a cold glare. And you don’t know why until —

You can’t believe the words you see open in her scrawled handwriting before you, that she imagines kissing a girl, touching a girl’s body. And you scream for her to come upstairs to face you.

Your daughter wants to kiss women.

Her father refuses to speak to her for months.

She pleads for forgiveness. She writes apology letters.

You can’t bring yourself to be as cold as her father is toward her.

What you don’t know is how she will remember this day as one of the worst days of her life.

You’re driving home from church with her and she asks you: “What’s the worst thing I could do as your child aside from murder?”

You think briefly and then reply curtly: “Be a lesbian.”

You keep your eyes on the road and pretend that you don’t hear her sniffling, that you don’t see her wipe tears from the corners of her eyes. And still, you don’t have the words to tell her why it’s the worst thing — because it rips you apart that you don’t know how to love her and hold her in the midst of this identity crisis she’s experiencing.

Later on, you attend a seminar about sexuality at your Baptist church. It gives you a bit of comfort knowing that there are authorities who can speak to what you found out about your daughter, who have words that you don’t have. She sits beside you, and you hope she is listening too, listening to these words you want to hold onto tightly.

What you don’t know is there’s a sense of unrest in her, a shame taking root deep inside her as a result of what she’s hearing. What you don’t know is when she hears that being a lesbian is the worst thing she could do, she begins to hate herself more because she does not want to disappoint you — and more importantly, she doesn’t want to disappoint God.

Your daughter loves a woman.

You suspected this was the case; you hoped it wasn’t true — the long summer days with this other young woman, her coming home late at night — you prayed it was merely friendship. You were wrong.

This little girl you knew — who loved books and school, whose tears and snot you wiped, whom you comforted with warm meals and hugs — who is she now?

She didn’t grow up and become the woman you hoped she’d become.

You are angry and confused at yourself, at why it’s so hard for you to see her beyond this part of her life, this part of her life you inexplicably recoil at. You are angry at her, for making a choice you believe is utterly wrong. You are torn apart, longing to confide in your husband, to have him walk alongside you in this struggle — but you know that telling him may mean a criminal sentence for your girl. You want to confide in one of the church ladies, but you know gossip-mongering will happen, no matter how much you want to try to trust any of them with your struggle.

What you don’t know is that this was a part of her brewing for years, that she found ways to grow past the shame and guilt you feel now. And yet, even so, she is also as angry and confused as you are, figuring things out like you are, learning to take things one step at a time.

Day after day, each conversation about her relationship often turns into a back-and-forth with her, usually with her anger flaring up because you said the wrong thing — again.

It is exhausting. In different ways for both of you.

Now, this young woman stands before you with her tear-filled eyes and strong voice, but she doesn’t back down.

“Does making this choice make me less of a Christian?” she asks, looking you in the eye.

“Then, why do you treat me like it does?” she replies.

And that’s where you are right now.

You are trying so hard to understand.

You are trying so hard to love her better.

You want to love her better.

And so, you keep trying. 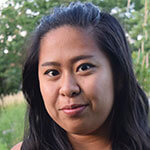 Karen-Luz Sison (she/her) is a Filipina-Canadian writer, editor, and content creator based in Toronto. She has had her work published in Ricepaper Magazine, The Globe and Mail, and Living Hyphen Magazine. Her creative work explores themes of faith, spirituality, and cultural identity. Karen-Luz has a Bachelor’s Degree in Journalism from Carleton University. Having listened to the stories of people from all sorts of backgrounds — politicians and protestors, scientists and poets, to name a few — during her time in journalism, she believes in the power of storytelling as a means of creating community and generating change and healing.Currently, she works as a communications and social media professional in the nonprofit world, where she enjoys helping nonprofit groups tell the stories behind work that they do and get the support that they need to keep going. Outside of her professional life, she loves to walk her dog, explore new food places, learn about the world through podcasts, and obsess over hip hop dance videos.