Mourning Practices in a Time of Pandemic

The first and only funeral I have attended was that of my grandfather. I had seen funerals portrayed on TV and in movies, of course: heavy caskets, a green lawn neatly dotted with cross-shaped markers, black-clad loved ones wearing sunglasses, and a priest presiding over it all.

But my grandfather’s ceremony was nothing of the sort. My mother and I flew to China in the July before my senior year of college, six months after his passing. We spent the days beforehand with our relatives, buying not only flowers, but also stacks of paper money, incense, fresh fruit, my grandfather’s favorite foods, and a small flask of liquor. Early in the morning, as my extended family — including aunts and uncles and cousins I had never met — headed to the cemetery with the urn and bags full of these supplies, we stuck our hands out of the window and scattered tissue-thin coin-shaped paper in our wake.

We stepped out, dressed in muted colors. Instead of a priest, a cemetery employee directed us to the plot and lingered nearby in case we needed his assistance. My mother, the eldest child in her family, helped my grandmother spread out the food and light the incense. She pulled out a sheet of paper, onto which my father had written Psalm 23 — “the Lord is my shepherd” — in Chinese, and read it aloud. As the sun beat down on us, each relative bowed before a framed photo of my grandfather and said their goodbyes, their voices thick with tears. And then it was my turn.

The question of whether engaging in these age-old rituals was “appropriate” for me as a Christian flitted through my mind. A few months earlier, I had read an article by a prominent evangelical pastor who discouraged Christians from visiting temples and shrines of other faiths, particularly in Asian countries, claiming that these historical sites were rife with “demonic activity.” Similarly, it is not uncommon for influential religious leaders and organizations to denounce the traditional Chinese funeral rites we carried out, as idolatrous ancestor worship. These pastors and writers, primarily educated in a Western Christian framework and context, have also painted indigenous, African, and other Asian traditions with the broad brush of “pagan” and “superstitious.” Certainly, not all practices are free from spiritual scrutiny under the umbrella of tradition. But we should question why it may be easy for a white American faith leader — whose ancestors built cathedrals, whose births and weddings and funerals have been Christianized for centuries, who rarely contends with dissonance between their cultural heritage and their religion — to condemn such practices.

Despite my doubts, I decided to follow my relatives’ lead, bowing before my grandfather’s photo and urn, speaking to him, and burning the rest of the paper money in the cemetery’s special incinerators. I did not make this choice lightly, because the emphasis on following “rules” and avoiding “un-Christian” missteps created a spirit of fear that was inextricably bound up in my early spiritual development. Nonetheless, the traditions that brought my family comfort were part of my inheritance as a Chinese-born American, as well as a way to show respect to my relatives and provide closure.

The COVID-19 pandemic has forced everyone to change the ways in which they mourn the dead and bid them farewell. Family members cannot comfort their loved ones with a reassuring touch of the hand or one last enveloping hug. Those traveling between states or countries to tend to gravely ill relatives are subject to testing, delays, and quarantines, after which they might be too late. In China, where kinship and community underscore one’s entire life, completing funeral rites is yet another way of demonstrating one’s responsibility and commitment to these ideals; when the government shut down funerals and pared the mourning ritual down to a skeleton of its former self, people were understandably agitated. In Brooklyn, dozens of bodies were held in inadequately refrigerated trucks outside of an overwhelmed funeral home, a foul smell alerting neighbors to their presence; the profanity of the situation horrified many across the country. A few short months ago, who could have predicted that our normally reverent and careful approach to death would be turned on its head like this?

As a medical student in New York City, my classmates and I were taught the importance of cultural competence — some prefer the term “cultural humility” — early in our education. Even though such efforts remain imperfect in the shadow of systemic and institutional injustice, I began to think more frequently about how a patient’s perception of physicians and the healthcare system may be colored by their cultures, their lived experiences, and the different ways they may think about authority and security and privacy. Before our first semester, we were assigned summer reading, The Spirit Catches You and You Fall Down, a book about a Hmong refugee family’s experiences in a well-intentioned health care system that was ill-equipped to engage with patients from unfamiliar backgrounds. A mountain of misunderstandings would build up and eventually contribute to the suffering of the subject of the book, a young girl. Not only that, the trust of the entire Hmong community, war-torn in their homeland and discriminated against in their new country, was broken and would require great efforts to repair.

Lack of cultural understanding and empathy causes damage and jeopardizes people’s health, we were warned through this book and many other anecdotes. To care for a population as diverse as that of New York City, we would need to expand our capacity to step into others’ shoes and understand the discourse around contested topics, like a family’s rights to patient information and traditional medicine or spiritual methods of healing, that may butt heads with the medicine practiced in our hospitals. To become the best physicians we could, we would first have to examine our own biases.

Likewise, I hope that as Christians, we can become more understanding of mourning practices that may initially seem strange in their unfamiliarity. Christians seeking to know and love others can start by learning why these traditions exist and how they provide comfort and hope in times of death and loss, rather than considering them through a preformed lens that assumes sinfulness. Western Christianity must also examine the blinders of colonialism, however subtly ingrained in one’s mind, that portray Asians as exotic, other, and suspect, even in the way that they honor the dead. The imbalances of power in our world today call for reflection and repentance of how the church continues to regard the Other.

Of course, decisions about mourning practices depend greatly on a person’s cultural background, their family’s customs, and their own faith. If engaging with these traditions causes distress, there should be no shame in abstaining from them either (Romans 14:13-16). As the body of Christ, we can be a community where our actions uplift the “peace and mutual edification” outlined in Romans 14:19 rather than flat judgements about what is or is not edifying to a mourner’s faith.

Mourning practices are generations-old traditions of solidarity, honoring other family members, carrying out closely-held duties, and caring for our own spiritual wellness. If our instinct is to reject the practices so important to our neighbors, we will leave unaddressed pain to fester, decomposing our interdependence and trust. When I took part in the motions of my grandfather’s funeral, God knows that I did not elevate my deceased grandfather to the status of a deity, but that I was honoring him according to the ways my culture laid out for me and commemorating the cherished details of his life. In that moment, God knew that I needed comfort and provided it through ritual and family. Though the details of a Chinese funeral were unfamiliar to me, I had my relatives — some more serious about tradition than others, but all united in carrying one another.

COVID-19 has taken much from us: lives, health, stability, and even the small pleasures that peppered our lives before. But in these times of pandemic, God is still reaching out to the hurting, offering means of comfort that soothe the soul, though these methods may appear strange to another’s eyes. Christianity is for every tribe and every nation, and we have diverse ways to honor the dead that reflect our diverse God. 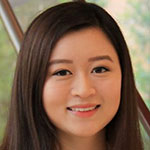 Jingwen Zhang is a medical student in New York City. She graduated from Amherst College, where she was first exposed to Asian American Studies and to new considerations of social and justice issues within the framework of her Christian faith. She also served as editor-in-chief of The Amherst Student. In her free time, Jingwen enjoys long walks and bike rides in the concrete jungle of the city.