Part of 1 of in
By Dae Shik Kim Jr.
Photography by Christina Kim
Aug 01, 2017 | min read
Part of 57: The Power Within to Create the World Anew
117 Snaps
117 0 Snaps
Oops! Something went wrong while submitting the form.

“What are you doing with your life? Why are you always throwing away your life for other people?”

It was my first time home in over a year; apparently, my mother was not very happy with my decision to become more involved in activism around the Seattle area.

I had recently quit one of my jobs and was spending much time advocating for social justice in higher academia by organizing other college students. I also increased my consulting work with churches in an effort to incorporate social justice into their ministries.

A lot of this work was pro bono, which didn’t make my mother very happy. By the end of our fight, she made me promise to find a “real job” and to stop going to protests and rallies.

My Mother, A Real Warrior?

It’s not that my mother’s “not down” or that she’s ignorant of issues happening around our country. Quite the contrary. Oppression was injected in her veins from the moment of birth — she grew up in a poor upbringing and immigrated to America when she was 19.

It would be arrogant and disrespectful to think I had to convince my mother that injustices were real. There’s no doubt that my mother is aware of the “isms” people from non-dominant backgrounds endure in America. As a woman of color who traversed foreign lands and seas for the sake of her family’s prosperity and endured the unconscionable, my mother’s social consciousness is one thing that’s without question.

It would be arrogant and disrespectful to think I had to convince my mother that injustices were real.

I learned at a young age that the only reason I am here today is through the resistance and survival of my mother. I’m the one that gets called a “social justice warrior”, but it’s on her shoulders that I stand. So isn’t my mother the real warrior?

After our fight, I flipped through old photos of my mother’s past. I couldn’t wrap my mind around my mother’s lack of support when it came to my own engagement in social justice. What was I missing?

I often witness my white, millennial friends’ anxieties before a trip back to their hometowns. I hear stories of how racist uncles vocalize why #BlackLivesMatter is a terrorist group, and how Black and brown people could stop getting shot by the police if they just complied with orders.

East Asians are notorious for being anti-Black, but not my mother. She is married to a Black man and has two Black sons, all of whom she’s seen suffer for their Blackness. If my mother was anti-Black, she would also be anti-me. It’s impossible for her to say that racism is over. So why was she so hell-bent on me stopping my engagement with social justice work?

My mother either had everything taken away from her, or she never had it to begin with. She never got to finish high school or follow her passions. My mother chased the American Dream before turning 20. She never had a dream before this. If she never had the ability to dream and pursue her future, can she really claim ownership of her own life? The American Dream may be a myth, but it was the only channel of hope for my mother.

But at the same time, my mother’s identity was restricted by the forces of American conformity.

As I continued to flip through my mother’s pictures, I noticed how beautiful she looked.  She was once a young and tender Korean woman who loved to laugh and witness the joy in her loved ones. She only knew a few phrases in English, but anything seemed better than the impoverished life she left behind in South Korea, even if that meant suppressing herself to assimilate.

America forced her to suppress all of herself, including her culture and her language, all for the sake of survival. Not for her to live and flourish, but just to survive. Yes, she left her impoverished life in Korea, but did she leave more than that behind?

America forced her to suppress all of herself, including her culture and her language, all for the sake of survival.

My mother lost her father at the age of 12. When you live in a patriarchal, labor-driven society, losing your father is a huge deal. My mother had to quickly adapt to being the head of household. My grandmother inherited all the burdens of hard labor at home, while my mother provided care for her younger siblings.

My mother had to learn how to survive in multiple roles: how to gather food, cook meals, and to earn some source of income — not only for her sake, but for her family’s.

I picked up a photo of my mother cooking. She always seemed to love cooking; her greatest skill is being able to whip out a full meal for the whole family in under 10 minutes. She’ll go to any end to ensure that her kids are fed, no matter the sacrifices she must make. My mother is too familiar with the hunger pangs of starvation, so she promised herself to never allow any of her four kids go hungry, even for five minutes.

But now I ask myself: Did she love cooking, or did she love keeping us fed? She couldn’t always keep the stomachs of her siblings full while they were growing up. Eventually, however, she learned how to keep her loved ones fed, no matter what, or how little she had to work with. So, was she good at cooking, or was she good at surviving?

Even if my mother didn’t go to the Women’s March on Washington, or share articles on Facebook, my mother is still a warrior.

Motherhood, for many women of color, is resistance. Motherhood is revolutionary. Women of color have been stripped of their humanity for generations. During the era of chattel slavery, Black women were even forced to return straight to work immediately after their masters kidnapped their children.

Motherhood stands powerfully upon selflessness. My mother had nothing left to care for herself by the time she was done caring for others. But you would also never hear her complain about which tasks or errands she needed to get done. She is and will always be the best person I know.

I used to unquestionably admire my mother’s selflessness. Now, I tend to lament it. Did my mother have a choice but to be selfless? It wasn’t an option for my mother. Instead, it was required in order to feed us dinner at night. Selflessness allowed her kids to have dreams — the very dreams she could never afford to have. I never bought into the American Dream like my mother did, because I had the privilege of never needing to. I am privileged because my dreams aren’t owned or stifled by America.

I used to unquestionably admire my mother’s selflessness. Did my mother have a choice but to be selfless?

That’s why I couldn’t understand why she didn’t support my activism for the longest time. All I wanted to do was help people the way she helped me. I grew up seeing how hard my mother worked to take care of us. Liberation for marginalized people meant liberation for my mother, too. Didn’t she get it? I was fighting for her, me, and us.

But, for a mother who never knew the taste of worldly ownership beyond the “ownership” of her own kids, fighting for justice is too big of a risk for one of her youngest sons to take. I want my mother to understand that I am fighting for her and that her hard work is what inspires me, but my mother wants me to know that she is also fighting for me and that my hard work gives her anxiety. It makes her proud, yet also keeps her awake at night. 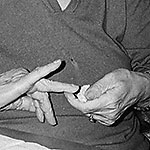 Christina Kim is located in Brooklyn, NY and uses photography as a medium to aesthetically capture the intersectionality of culture, social issues, and relationships that impact her on a personal level. michinyean.com