Part of 8 of in
By Maika Llaneza
Illustrations by Wesley Ching
Aug 05, 2018 | min read
Part of 61: Searching for Hope
5 Snaps
5 0 Snaps
Oops! Something went wrong while submitting the form.

I’ve been a monster fanatic for 13 years. Anyone who walks into our living room is bombarded with a large bust of Frankenstein’s monster’s head on the mantel, Frankenstein/Bride of Frankenstein movie posters on the wall, gothic/horror fiction and monster paraphernalia on the bookshelf, and random monster toys on the coffee table.

My husband smiles and shakes his head whenever I bring home more gothic or horror novels I found at the thrift store for a quarter each or monster trinkets I bought for half off after Halloween. Even though he thinks it’s a bit silly, it’s no longer a surprise to him.

My fondness toward monsters goes beyond a borderline materialistic obsession. To me, the monster is symbolic, and serves as a source of comfort and hope for me in a sometimes chaotic world.

To me, the monster is symbolic, and serves as a source of comfort and hope for me in a sometimes chaotic world.

The story of Frankenstein’s monster has helped me understand the world we live in and what our society is capable of doing. The monster is a being who feels empathy and wants to be included. He learns how to talk like the poor family he’s secretly taking care of and reads the books he finds in the woods. Yet, when he tries to make friends with the poor family in the story, their ignorance leads them to run away, scared to death.

All Frankenstein’s monster wants is to love and receive love in return. He feels just like any other human being — he only looks and acts different. Yet, because the new world knows nothing about him, he is misunderstood and thus feared. He is rejected, shamed, and shunned by society.

Because the new world knows nothing about him, he is misunderstood and thus feared.

I know I can’t speak for others, but I see myself in the monster, as he “was brought” into a world where he was different from everyone else. I moved to the U.S. from the Philippines when I was 7 years old, and felt very much the outsider who looked and acted nothing like my American peers.

I had a very thick Tagalog accent when I first came to the U.S. It didn’t matter that I understood and spoke English fluently, because I was placed in an ESL class as soon as I was enrolled in school. My ESL teacher spoke loudly and said each word slowly when talking to me. “This … is … a … BOOOOK,” she’d say as she made hand gestures opening a book.

My parents thought it was best for me to continue practicing English at home so I could lose my accent sooner. This way, people wouldn’t make fun of me and I’d be accepted in the “regular” third grade class.

It took a few years, but I eventually lost my accent and then forgot how to speak Tagalog altogether.

It took a few years, but I eventually lost my accent and then forgot how to speak Tagalog altogether.

My mom once brought home skin whitening cream to rub all over my face and body; she wanted me to look white because it is considered the standard beauty in both the Philippines and the U.S. I was getting “too dark” playing out in the sun and she didn’t want me to be called “the maid’s daughter”, something some Filipinos say to make fun of a girl’s brown skin. By the time I was 14 years old and started getting dolled up, I would choose lighter foundation, use Sun-In to make my hair blonde, and wear fake blue colored contacts. I didn’t quite understand it then, but I know it now as a form of internalized oppression.

I’ve tried to assimilate into white American culture in order to fit in for many years. I stopped bringing my favorite fried tilapia or chicken adobo and rice to school, and instead opted for ham and cheese sandwiches or Lunchables. I learned about the sunny side of white American history while knowing close to nothing about my Philippine heritage. I tried to break down or change who I was, and replace it with whiteness.

I tried to break down or change who I was, and replace it with whiteness.

All the while, I’d still get small little nips from “well-intentioned” white Americans.  Microaggression here, prejudice there — they either didn’t see it as offensive or would say it’s “all in good fun”. “Wow, you speak good English. How did that happen?” “What are you? Where are you really from?” “You can’t be a good driver — you’re an Asian woman!” “I want to help colored people like you.”

Every so often, a full-blown racist statement takes me by surprise. “Let’s get out of this restaurant. It’s getting too brown up in here,” one older white woman told her friends when I walked into a restaurant in Kern County, California. I was so upset but I didn’t say anything. I remember when I first started teaching, one of my assistants — much older than I was and someone I thought I could look up to — told me, “You shouldn’t have any opinions about our politics. You’re not from this country.” It felt as though she just stabbed me with my own pair of classroom scissors. Again, I didn’t know what to say.

“You shouldn’t have any opinions about our politics. You’re not from this country.”

I eventually realized that it didn’t matter how much I tried to assimilate. White Americans will still look at me as “the other”, judge me, and try to make me feel inferior with their words and actions.

Most recently, one of my so-called friends shunned immigrants and people of color all in one breath. He said immigrants don’t deserve government resources (i.e. public school education) and minorities shouldn’t get free handouts (referring to affirmative action). As a 1.5 generation Filipina American who’s lived in the U.S. for 30 years, I was not exempt from being “othered” by my white American counterpart. Apparently, people like me don’t deserve the same benefits in this world as white people.

Apparently, people like me don’t deserve the same benefits in this world as white people.

So, I find myself asking how I can convince a conditioned people — the ones who fear the other or see the other as a burden to society — that we have a right to be here, to be anywhere on this earth, to be loved, and to share the same basic needs as anyone else. How might I tell those who claim to be people of faith but don’t see their political beliefs and personal biases as anything wrong that Jesus wouldn’t stand for this hateful “othering”? What words can I say and what actions can I take today?

But when I look at images of Frankenstein’s monster, I don’t think about his demise. I think about how Jesus would have nurtured this monster — and how Jesus nurtures me. This also reminds me to look to Jesus’ example and embrace all “monsters” of today. It reminds me to help spread the word to show how Jesus took care of the downtrodden, marginalized, and despised, and how he questioned the status quo in his lifetime.

What would happen if society accepted the monster, learned from him, and took care of him, as he did with the poor family he saw in this new world? Would the story have a happier ending?

What would happen if society accepted the monster, learned from him, and took care of him?

I do think the monster’s world and our world would be a much better place if more people showed compassion or even the slightest bit of understanding, rather than rejecting others based on their outer appearance. I do have hope that our world can be a much better place and that we can change the narrative to where we see the difference in one another, accept them, and love them for who they are.

When I walk past my living room and see my little monster collection, I think about tolerance and acceptance for all and how Jesus would have absolutely loved the monster. And I can imagine what our world would be like if all human beings did the same. 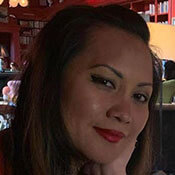 Maika Llaneza is a Filipina American writer, teacher, and monster fanatic. Her stories can be found in the January 2020 Cover Feature of Sojourners Magazine, Inheritance Magazine, HelloGiggles, State of Formation, Stories with Sapphire Podcast, Healing the Unknown, and a new episode of Spooked Podcast. She was a State of Formation Interreligious Writing Fellow, a conference presenter at the Biennial Filipino American National Historical Society (FANHS) Conference, and an upcoming debut kidlit author. She is currently an Exceptional Student Services Teacher at a French Immersion School in New Orleans, LA.