Opting Out of the Race

I'LL NEVER FORGET the first time I kissed a white girl. It was a dream come true.

Every movie I had ever watched and every image I had ever seen from pop culture idolized white women while negatively stereotyping Asian women. I grew up in a suburb of Los Angeles in a time when there weren't very many Asian Americans in the first place; oftentimes, I was the only Asian kid in my class, so there weren't any Asian girls to date, period. So my goal in high school was to date a white girl.

Looking back I'm not sure exactly what the appeal was, but one undercurrent of my dating ambitions was a desire to mask my ethnic identity by being in a relationship with someone who wasn't Asian. I didn't quite fit in the white suburb culture, and I believed that if I could date a white girl I could somehow fit in and magically change the person staring back at me in the mirror.

This fear of fitting in — rooted in a desire to be known and belong somewhere — drove me to fit in with a people group. I craved to be part of something bigger than myself. I just confused "something bigger" for being white.

On top of that, my dissatisfaction with my ethnicity extended to other social spheres outside of dating as I began to believe the lies of being Asian American: I couldn't be a leader in high school, whether it was class president, captain of the volleyball team, or a leader of a campus club. No one ever told me blatantly that I couldn't be a leader because I was Asian, but somehow I had recorded a toxic tape in my head — a song of insignificance and shame that was stuck on repeat.

No one ever told me blatantly that I couldn’t be a leader because I was Asian, but somehow I had recorded a toxic tape in my head.

I never had anyone serve as a healthy model for me growing up, and I felt like my ethnic identity was a barrier to believing who I could become. But I couldn't tell if dating a white girl would make me more white by association, or if the contrast emphasized how Asian I was.

I didn't know if I was ever enough for the white girls I dated, even though dating a white girl was the closest I'd get to being white. How can you possibly be enough if you're striving to be another race? Most of the time, it felt like running a race that had no end. Even in other areas, if I achieved good grades, received honors, or earned positions of leadership, it never felt enough.

I felt trapped with no way out, because I couldn't get out of being Korean — I was ashamed. I pretended like I wasn't Asian by dressing a certain way or picking up certain hobbies. As I looked in the mirror, I would ask the question, "God, why did You make me this way? Was I a mistake?" The constant fear of rejection was a byproduct of not feeling good enough simply because I wasn't white.

Who you think you are has a significant impact on what you believe about yourself. I began to believe the lies that I associated with being Asian American. Being seen as significant or someone with prestige was my mask of choice, and I believed that marrying a white girl would somehow get me there.

When my wife, Emily June (E.J.), and I were dating, we went to pre-engagement counseling, because we had some communication issues and deeper things to work through. Dating a white girl wasn't what Hollywood had seemingly promised me, and I figured that out the hard way.

During one of our sessions, the counselor said something that has helped shape my understanding of relationships and community: "A marriage relationship is a redemptive agent where God uses the other person to redeem the brokenness in each others' lives." I began to understand the implications for this profound statement in my biracial marriage.

"A marriage relationship is a redemptive agent where God uses the other person to redeem the brokenness in each others' lives."

We got married n the summer of 2012. Since then, this blond-haired, hazel-eyed beauty has been helping me dismantle the toxic tapes I listen to, and has helped me see myself the way God sees me as a result of our biracial marriage.

One of the ways God has been redeeming me through our marriage is that I don't have to hide from being Asian anymore. E.J. loved me for who I was, not who I wanted to be or thought I wanted to be. There was no expectation to be any less or more Asian than I was. E.J., no matter what her ethnicity is, couldn't make me any more or less significant — this is a humbling realization. Marriage isn't a cultural mask that one can hide behind; rather, it's a mirror that reveals who God is making you to be — from broken to redeemed.

When I married a white girl, I received a validation that my heart always longed for. But it wasn't to become white; it was to be enough. Obviously, I didn't become white as a result of marrying a white girl, but I figured that that wasn't what I was longing for in the first place. Through her, God was revealing to me that I was enough. She named that in me. She affirmed that I was enough. She said, "I love all of you, not just some parts, but all parts." She loved my skinny Asian legs, my straight black hair, and my obsession with Asian food and video games. I finally found rest as I felt the freedom to believe I was enough. I realized that when I believed the fact that I was enough, both for God and E.J., I didn't have to be exhausted anymore from striving and running; I could rest at night knowing that I was exactly who God created me to be.

I didn't know that marrying E.J. would actually change the way I saw myself. I began to see myself the way God made me — "Fearfully and wonderfully made." I wasn't a mistake or an accident; for the longest time I thought I was born in the wrong ZIP code or family. I despised the voices in my head saying that I wasn't good enough, or that I had to mask my true identity to belong or to have leadership abilities. For many years, I had been running, hiding, masking, and trying to be someone that I wasn't. Marriage became a redemptive agent in the sense that I was "naked and unashamed". I think that's what we were created for, to be unashamed, to be unafraid of who we are or who we were made to be.

We were created to be unashamed, to be unafraid of who we are or who we were made to be.

Early on in our marriage, E.J. shared that she envied my Asian American culture, because her journey has been the opposite of mine. She didn't have any single culture she could identify with. When people ask E.J. what her ethnicity is, she would say, "Well I'm part Irish, English, and little bit of Cherokee, but I really don't know." She felt that marrying an Asian American would actually help her root in who she is — and perhaps it has. But while she was seeking to find a culture to root herself in, I was trying to run away from it all along.

It amazes me how much I'm not just noticing cultural differences — but how our marriage sheds light on aspects of cultural I never recognized before.

When my sister was staying with us a few months ago, E.J. asked, "Do we buy extra groceries for her? How long is she here for?" Her questions made sense to me, but they still took me by surprise — I was always taught that hospitality to family had no limits and spared no expense.

As much as we're seen as a positive model for biracial marriage, we're still processing how our values and upbringing shape this new culture we are creating. It's neither fully Asian nor fully white. It's a new marriage mixed with new values and challenges, but one that is leading us both toward redemption. 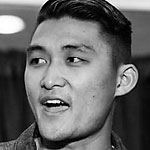 Danny Kim grew up in the Los Angeles area and graduated from California Polytechnic State University, San Luis Obispo. He graduated with a masters of divinity from Bethel Seminary and is currently serving as the site pastor at Bridge Church, an inner city church plant in San Diego. An adjunct instructor at Bethel Seminary, Danny is passionate about faith, leadership, and identity.