What if the government stopped issuing loans to seminary students?

What is the relationship between seminaries and churches? Beyond only being a pastor pipeline, we wonder if more intentional collaboration could have prevented what happens in the following story.

I AM A 29-YEAR-OLD Korean female alone seeking a pastoral position, preferably at a semi-charismatic church with a focus on social injustice and discipleship. I'm skilled at preaching, exposition, and am well-versed in New Testament hermeneutics. Not to worry, my wardrobe is highly demure (with heels no higher than an inch). I should mention — I don't have an M.Div degree.

I started out thinking I'd become a doctor. My parents introduced the concept of the medical profession to me early on, buying me toy doctor bags and the game "Operation". I even went to medical school, only to leave midway, because the call to ministry was insistent and so was my curiosity; I wanted to know what God could do if I obeyed.

I felt an urgency about saving souls. Seminary was such an exciting prospect because I had heard that it was a space where I could ask questions that, yes, might've stemmed from doubt, but also from a genuine hunger to know God more.

I had heard that seminary was a space where I could ask questions that, yes, might've stemmed from doubt, but also from a genuine hunger to know God more.

Once, I remember visiting my friend's Pentecostal church and sitting speechless when the pastor shared that there were multiple interpretations regarding eschatology. The way we understood it at my Presbyterian church was that if you didn't believe it the way our church did — about the rapture, the terrors that followed it and then finally heaven — you weren't a Christian. I used to be so afraid when I unexpectedly didn't see my parents around, afraid that it was because the rapture happened and I was proven to be a "false" Christian. Through tears, I felt so liberated that I could still love God fully while disagreeing with other Christians. Church and its teachings sometimes scared me into a belief in God. Seminary was a place that could free me in my belief in God. I didn't want to have to spare God my questions.

I hoped seminary would be the place to ask those questions and know that asking those questions was being Christian, claiming my place among God's people — Israel that wrestles with and is in relationship with the Almighty God. You could still be Christian and not believe what I believed and still live a devoted life to God! After all, isn't everything we believe ultimately based on interpretation?

Dad, of course, didn't feel there was a place for me — an Asian American woman — in full-time ministry. We didn't talk for close to a year, which was tough because I needed a pastoral reference in the application process, and he was my pastor! Eventually, he showed me his reference letter — to wit, "I don't believe she should be a pastor; I don't believe she's called. But what can I do? I'm just a parent." Not that it would've made a difference anyway. Seminary's not even an option now.

When the government banned the issue of federal loans to seminary students, it had been such a small blip on the radar. It was part of a larger government push to separate church and state in order to maintain a clearer stance on religious tolerance. International criticism of U.S. rhetoric and policies discriminating against Muslims couldn't be ignored anymore, so a flurry of bills was passed that affected how the government treated all religions. After churches lost their tax-deductible status, the new policy opened up churches as a source of federal tax revenue, while saving the government money to redirect their money elsewhere.

But we never thought it'd unravel to this. The cost of seminaries these days has skyrocketed, with smaller institutions closing left and right; no end of the theological spectrum was spared. With fewer students enrolling in seminary, only individuals or those supported by churches wealthy enough to pay out of pocket are educated. Larger denominations started to focus on holding one-off, denomination-specific workshops and seminars.

Only individuals or those supported by churches wealthy enough to pay out of pocket are educated.

Seminaries these days have either only white or Asian students, unsurprisingly the two most economically privileged groups in the U.S. In contrast, Black churches have been relatively steady as their expectation is that the church leader is a community and civic leader. My denomination requires an M.Div; the door to seminary has shrunk into this limited access squeeze to become a pastor — like we're turning it into a club rather than a calling.

The door to seminary has shrunk into this limited access squeeze to become a pastor — like we're turning it into a club rather than a calling.

I already knew I had to be responsible to pay for my own seminary education. The church could've supported me, but especially in Korean American churches, self-sacrifice is honored as an admirable service to the Lord. The more time or suffering you endure for the Kingdom, the more respected you are for your devotion. I wouldn't have wanted to pass on the opportunity to show God how much this meant to me, putting my money where my mouth is.

It's always been like this, and that was part of the problem. It had become so normalized for the church to not actively develop their own leaders and invest in them financially that it wasn't prepared for the shortage of leadership when other circumstances fell through — the economy tanking in 2008, unexpected shifts in government policy, and a steady rise in cost of living, to name a few.

In a growing number of isolated efforts to be resourceful and save money, there's been a rise of nepotism within churches. Pastors bring up their own children to become the next pastor, giving the term "pastor's kid" a whole new dimension. Churches that started out semi-progressive or semi-conservative grew to become more extreme with every generation.

In tandem, parishioners have developed a laziness to loving God with all their mind, as pastors have become more factionalized in their theology. It manifests in this attitude of "feed me what I need to be thinking about and how I need to believe. Just tell me the right answer." It's easier that way.

Parishioners have developed a laziness to loving God with all their mind, as pastors have become more factionalized in their theology.

I miss the good old days when critical exploration of the Word shed light on its power and how much more there is to know about God. The mystery of who God is, that it would take an eternity to know God — even in the beautiful diversity of coexisting and contradicting theologies — there used to be a hunger for that!

These days, churches are more afraid to create spaces that allow the liberty to ask hard questions, to doubt, to be open to diverse perspectives. Collaboration between seminaries and churches — in both knowledge and culture — had rarely been and still is not fostered outside of seminaries producing pastors.

Without seminary training, I've had to go out and find a pastor to personally apprentice me in pastoral ministry. Pastor Joe Rodriguez of Redeemer Church in Monrovia, California opened my eyes to a beauty unique to a multicultural church and a multi-ethnic pastoral staff offering their diverse, contextual interpretations of the Word. A lot of Asian or white churches will never get to explore that as fewer Black and Latino pastors with M.Divs in hand are available.

Yet Jesus Himself defied expectations of the "proper" leader. He should've looked like — a peaceful man on a donkey as opposed to a warrior on a horse. The disciples heard the same stories we see in the Bible. They walked and served the people with Jesus. And people are going out and doing likewise.

Yet Jesus Himself defied expectations of the "proper" leader.

Across ethnicities, across giftings, leaders of all shapes and sizes have emerged in other ways, because people recognized that there was much to learn from each other, not just in why we love, but in how we love. It's been amazing to see the church wield its imagination to answer, "What qualifies a pastor?" Leaders are now recognized by how well they can love, by their perseverance in their struggles, and the peace they can foster in themselves and others. Humility is hardcore now.

In my home church where my dad leads, they've actually gone back to the way the Old Testament acknowledged the call of leaders — elders of the community getting together and pronouncing approval of the next leader. Ever since this collective process took root five years ago, there's been more widespread, intentional cultivation of younger members of the church, whether or not they become a leader.

With my home church's complementarian view, I had to pursue a pastoral position elsewhere. You can actually find me online. LinkedIn created a religious leadership branch with badges that show competency in a variety of pastoral skills, knowledge, attitudes, etc. Essentially, my other work contexts and the global community can acknowledge my expertise for others to see.

And here I am, trying to get hired. Not as a pastor with its usual connotations, but as a fellow human being looking to wrestle with God alongside others. Evolving times have demanded that intra-church relationships evolve as well. Leaders must be able to look and be different from each other; how else will the gospel reach diverse people of the world?

My hope is that as the church continues to develop its place in society, we do not lose sight of the richness of this story that has survived hundreds of years — a constant yet living Word that breathes truth into life, no matter the times. May the responsibility for this story lie with all God's chosen people, followers and leaders alike pursuing God with all our heart. With all our soul. With all our mind. With all our strength.

Do not lose sight of the richness of this story that has survived hundreds of years — a constant yet living Word that breathes truth into life, no matter the times.

If you hear from anyone looking for a pastor to hire, let me know. 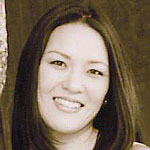 Deborah H. C. Gin is director of research and faculty development at the Association of Theological Schools. She was formerly Associate Professor in Ministry at Azusa Paci c Seminary. She’s a Korean American woman happily married to a Chinese American man. She still plays piano, sings, and is ecstatic to have found a rock climbing gym in Pittsburgh.