What does it mean to be a queer Asian disciple of Christ? That is, what gifts might openly lesbian, gay, bisexual, and transgender Asian Christians bring to the larger Body of Christ?

I came out to my Mom some 25 years ago. I still remember that day as if it were yesterday. It was my senior year of college, and my Mom was visiting me in my dorm room.

Some people discover that they are gay later in life. Not me. I knew that I was gay from a very early age. I’m what people call a “Kinsey Six”. That is, on a scale of zero to six in terms of measuring same-sex attraction, I’m pretty much a six. I’m not going to change.

But I also knew from a very early age that I wasn’t supposed to talk about it. The fact that I was the older son in a first-generation immigrant Chinese American family didn’t help. Nor did the fact that we were Roman Catholic.

But I also knew from a very early age that I wasn’t supposed to talk about it.

So I never talked about being gay. I was so closeted that I went all the way to the other side of the country for college just to give myself space to come out to myself and to my friends. But I still didn’t tell my family about it.

In my senior year of college, I finally decided that I had to come out to my Mom because I would otherwise be living a lie. My Mom was visiting me at school, and after going around in circles for what seemed like hours, I finally said to her: “MaMa, I’m gay.”

I’ll never forget her first response: “Don’t tell your Father or Grandmother about this because they will have a heart attack and die.” Her second response was equally memorable: “What will we say to our family and friends if they ever find out?”

“Don’t tell your Father or Grandmother about this because they will have a heart attack and die.”

Looking back nearly a quarter of a century, I realize that my Mom’s reaction was consistent with the numerous stories that I’ve heard while ministering to the LGBT Asian community since the early 2000s.

There’s a poignant story in the anthology “Asian American X” from a closeted young Korean American man who had already achieved much in life. Even though he was the model Asian American son, church leader, and Ivy League college student, he wrote that coming out as gay would be “quite literally, the ultimate failure — moral, social, and personal all at once. It would nullify everything good that I have done.”

Given all this pain, how can those of us who are LGBT, Asian, and Christian ever hope to be followers or disciples of Christ? How can we hear the “good” in the Good News?

How can we hear the “good” in the Good News?

I believe that today’s Gospel reading about discipleship from the ninth chapter of Luke speaks deeply to the experiences of queer Asian Christians. In the text, Jesus is approached by three people who want to be his disciples.

To the first person (who says that they will follow Jesus wherever he goes), Jesus says, “Foxes have holes, and birds of the air have nests; but the Son of Man has nowhere to lay his head.”

For many of us who are LGBT Asian Christians, we — like Jesus — also have nowhere to lay our heads. When we come out, we think that everything will be great, but we quickly discover that we are excluded from a predominantly white queer community that is often racist. We are also excluded from a predominantly straight Asian community that is often homophobic. And, if we are lucky enough to live in a place that provides support groups for LGBT Asians, we find that we are often excluded by others who are hostile to people of faith.

When we come out, we think that everything will be great, but we quickly discover that we are excluded from a predominantly white queer community that is often racist.

To the second person (who says that they want to first bury their father), Jesus says, “Let the dead bury their own dead; but as for you, go and proclaim the kingdom of God.”

I can’t tell you how many LGBT Asian Christians have told me that they would rather wait until their parents have first died before coming out. “I would never want to shame them,” they have said to me. This sentiment is magnified by cultural notions of filial piety and of wanting to honor one’s parents — sometimes to the detriment of one’s own mental and emotional well-being.

To the third person (who wants to first say goodbye to their family), Jesus says, “No one who puts a hand to the plow and looks back is fit for the kingdom of God.”

For many queer Asian Christians, coming out is particularly hard because of a sense that one must choose between one’s biological family and one’s family of choice. Do we choose our extended familial support network of aunties and uncles, not to mention our family ancestors? Or do we choose our partners? Although this might ultimately be a false binary, the perceived choice feels very real for those of us who are in the process of coming out. As such, coming out often requires saying goodbye to our families of the past before one can look to our families of the future.

Today’s Gospel reading reminds us that queer Asian Christians actually have a lot to teach the broader Christian community about following Jesus and discipleship.

LGBT Asian Christians know a lot about home, parents, and family. We know a lot about not having a place to lay our heads; about allowing the dead to bury their own dead; and about putting a hand to the plow, and looking forward instead of back.

The Gospel calls all of us to break the unhealthy and destructive silences that surround these issues. Listening to LGBT voices within the Asian and Asian American community is not just a matter of diversity or being politically correct. It is a matter of hearing the Gospel and what Jesus teaches us about being his disciples.

Listening to LGBT voices within the Asian and Asian American community is not just a matter of diversity or being politically correct.

Fast forward nearly a quarter of a century. Notwithstanding my Mom’s worries, I eventually did come out to my Dad and my Grandma. And, no, they did not die of heart attacks. It has taken time, but the members of my extended family — including our aunties and uncles — have come to accept and love Michael, my husband and partner of over 23 years, as one of their own.

And, believe it or not, my Mom has become a public spokesperson for families and friends of LGBT Asians. A few years ago, she spoke to the Chinese language press about the importance of allowing LGBT Chinese Americans to march in the New York City Lunar New Year Parade in Chinatown.

Recently she recorded a public service TV announcement in Mandarin Chinese that aired in many parts of the country, reminding Chinese American parents to love and accept their LGBTIQ children. You can google “Asian Pride Project Mandarin PSA” if you’re interested in seeing my Mom in that video.

As we reflect deeply on what it means to be followers of Jesus, I invite all of us to reflect on what the queer Asian Christian community might teach the broader Body of Christ about Christian discipleship.

I invite us to reflect on not having a place to lay our heads, on letting the dead bury their own dead, and putting our hands to the plow and not look back — all for the sake of following Jesus and of being queer Asian disciples of Christ.

Adapted from a sermon given at Brite Divinity School on March 3, 2015. 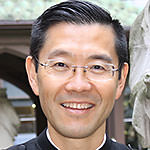 Rev. Dr. Patrick S. Cheng is an Episcopal priest in New York City. He serves as the associate rector at The Church of the Transfiguration, an Anglo-Catholic parish in Midtown Manhattan. In addition to his parish ministry, Patrick works for a national agency of the Episcopal Church. He is the author or co-editor of four books, including “Radical Love” (2011), “From Sin to Amazing Grace “(2012), and “Rainbow Theology” (2013). Patrick also serves on the board of trustees of the Anglican Theological Review.