It was a cold Shanghai winter day. My roommate Erika and I were on our way to dinner at Xintiandi when a raucous group of middle-aged Chinese men reeking of cigarette smoke boarded the train.

The men immediately saw blond-haired, blue-eyed Erika and began talking loudly amongst themselves. They then turned to me and demanded in slurred and barely intelligible Mandarin, “Ni pai wo men de jiao pian” (take our picture)! Without asking Erika’s permission, they began taking her picture and continued to ask me to take theirs with her. I explained in my far-less-than-fluent Mandarin that I was American, too, studying in the same program as my friend, and that they could ask my friend themselves to take her photo because she was also learning the language. They would have none of it.

“How can you be American when your nose looks like ours? Where is your family from? It can’t be America.” “See,” they told me, “Her face looks American; your face looks Chinese, like ours. Now take our picture with her.”

As a Chinese adoptee returning to China during my junior year of college, I realized how little I had thought about my ethnic identity or what being Chinese meant to me before this. I grew up in an upper-middle-class family in suburban New Jersey, where my school friends, church community, and small town already knew my family and my story.

Now, I was in China to study the language and culture and connect with my ethnic heritage; but I also was faced with experiences where I had to explain who I was to people on the streets of Shanghai. I hadn’t needed to vocalize the complex layers of my Chinese American identity to anyone before, and I wasn’t quite sure how to make sense of it myself, much less explain it to others in Mandarin.

Shanghai is a city where East has collided head-on with West. When you walk or take the metro through Shanghai, you see the sparkling financial district, massive shopping malls and streets such as East Nanjing Road, flocks of tourists, gated expat communities, upscale restaurants, and the manicured lawns of the French Concession — all indicators of a thriving, wealthy, westernized city. But you also see and experience socioeconomic and cultural clashes, such as buildings crumbling into trash-filled alleyways that border the gated expat communities, elderly people without shoes sitting outside towering H&M stores asking for money, or men and women of all ages spitting on the side of the road.

Rural and urban clashed right before my eyes day after day in Shanghai. I felt the clash between the poor and wealthy, the gentrified and the original, the minorities and the Han, the young and the old, the American and the Chinese.

As a millennial Christian, English-speaking, Chinese adoptee studying abroad, I found myself inhabiting a space right in the midst of these tangible clashes. I tried desperately to cling to my American identity — that I had been raised in the American culture by American parents, and that I was here to study, just like my classmates.

And yet, I longed for approval and acceptance from the Chinese people I met. I wanted them to understand the complex journey I had been through to return to my country of birth. I wanted to convey the deep desire I had to talk through and reimagine the ways in which I could be both American and Chinese. I didn’t want to get caught up on my facial features; my heart was soft and open to hearing peoples’ stories, hopes, and dreams and communicating my own. I came to China wanting to forge deeper human connections that went beyond social location and appearance. I tried desperately to cling to identities that I had always taken for granted but now was being forced to reimagine, while simultaneously trying to keep my heart open and soft to chances to grow in my understanding of my Chinese identity.

As I passed more people on the streets that looked like me in a day than I had before in my entire life, I longed so much to be accepted by and feel connected to those who I talked to. Every fiber of my being wanted to be Chinese in those moments, but I continually felt less than enough.

The truth of my adoption story is that I was never accepted by China, and my story was marked before I was born by a multicultural experience, removed from my nation of birth. As these experiences of misunderstanding, frustration, and rejection grew, I continued to examine the true longings of my heart and what I was seeking to find in China.

At a basic level, I have always wanted the best of both worlds and for my full ethnocultural identity to be understood wherever I am. I wanted to fit in and be wholly accepted into Chinese culture as a Chinese American. But I have also always expected that I will be accepted and understood as an American in America.

The heartbreaking reality that I faced in China was that I just never was going to fit the preconceived understandings of what it was to be “sufficiently Chinese” in the eyes of many Chinese natives. My skin was too tan; I was too broad-shouldered and athletic; my clothes and hair weren’t right; my Mandarin wasn’t nearly good enough. I harbored different desires deep in my heart as well: my interests, my hopes and dreams, my understanding of family, faith, nationalism, and success were completely different.

Over four years have passed since my time in China. I have moved around the U.S., traveled to other parts of Asia and the world, continued my education, and furthered my personal quest to understand and claim my identity, and I am growing in my sense of agency and power in determining my American-ness and Chinese-ness in spite of what anyone else or whatever culture I am in at the time may say. I have met more adoptees and more Asian Americans with stories different than mine. I have learned from the deep and painful stories and theologies of people of color, women, and Asian American women specifically — stories that reflect God’s grace and faithfulness in the midst of doubt, questions, and disconnect. I have learned to listen to others’ stories, ask questions, and then tell my story well. I have learned to be confident in what I do know, but always humble in the endless questions that persist.

Most importantly, I have been embraced and accepted by new and old communities, friends, and family. This love has allowed me to take pride in my unique cultural and ethnic identity, to trust others and be vulnerable in engaging with our stories, and deepen my capacity to love others as well.

Much of my ongoing journey to experience God’s peace and shalom has been in learning from histories and theologies that reflect the movement from once broken or disconnected experiences of identity to whole and reconciled experiences. Reading the story of God told in different ways across time and place has showed me that my story is reflected in the narrative of the people of God. I have found agency in also seeing that there is both need and room for me to share with others of the faithfulness of God through my own unique perspective and story.

There was one young woman I met at Salvador’s, a café in Kunming, during my spring semester studying with Middlebury’s language intensive program. I was sitting alone at a communal round table on the first floor by the restaurant entryway with whatever Chinese homework I was working on, struggling to figure out the characters. This young Chinese woman next to me noticed and addressed me in English, asking my name and where I was from. So surprised and refreshed to hear questions in English directed to me, I responded in English and had a great conversation with her about my adoption story and my journey to China to learn the language and culture. She also shared a bit of her story; she had studied abroad in the U.K. and understood what it felt like to be misunderstood as a foreigner in a strange country.

For a moment, I saw my story, as if in a mirror, reflected back to me through hers: We were two young Chinese women trying to understand ourselves, both trying to move beyond our native nations in order to find ourselves. Over topsoil filled with plants of desperation, frustration, rejection, and anxiety, our conversation that day planted within my heart a layer of hope for connection and understanding to be found in my future interactions. I rode my bike away from Salvador’s full of renewed strength and feelings of warmth, gratitude, and humility for whatever may come. 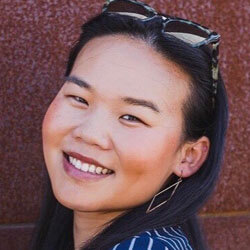 Joy Frederich is a Chinese adoptee, born in Jiangxi, China, and currently living in Los Angeles, by way of Boston, Kentucky, New Jersey and Maine. Joy recently completed a Masters at Fuller Seminary in Intercultural Studies with a focus in Development and Urban Studies. When she isn’t at a spin class, she’s likely either listening to live music, spending time with her family in the LA area, hiking, reading or writing. You can learn more about her adoptee journey at joyfrederich.com.