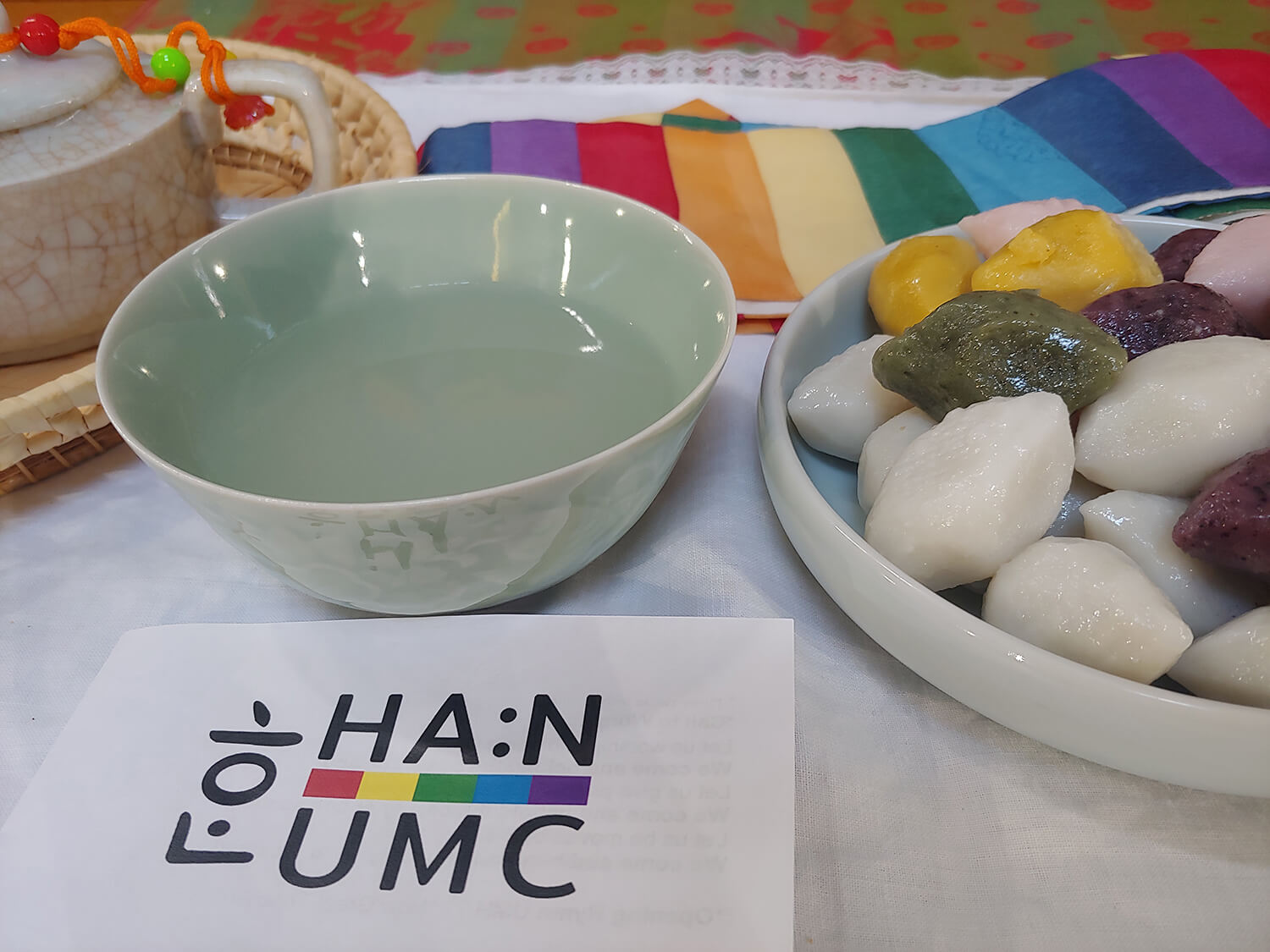 Sometimes we are defined by trauma, while other times we are defined by both beauty and love. And while life is often a complicated mixture of both, trauma often becomes the daily bread we share with each other, particularly in marginalized communities where oppression can feel as normal as the sun rising and setting. This is the experience of church for too many, particularly in Korean American and Asian American churches. Yet my own faith journey and that of HA:N United Methodist Church have been shaped primarily by beauty and love.

This isn’t to say HA:N is oblivious to the ways in which so much harm has been inflicted by the church and our ethnic heritages in various ways.Indeed, our name, HA:N, is itself a word that evokes a mixture of collective injustice and trauma with a sense of hopeful persistence. We are a progressive congregation because we have experienced what it means to be shaped in love and we desire to be that for the world around us.

Too often, progressive Christians are tempted to mirror the evangelical “born again” model of what it means to be a progressive church, meaning a rebirth into progressivism out of a rejection and shedding of conservatism. Being born again means rejecting a previous sinful life and embracing salvation through Christ. Anyone who has not experienced the trauma of sinfulness and repentance cannot experience salvation, or so the theology goes.

I was continually shaped by Korean Christian love.

As Asian Americans, there is a similar sentiment whereby everything traumatic in our Asian American experience is made into a quintessentially Asian thing attributable to old, cultural values; all that is liberating is some divergence from our Asian heritage. Personally, I’ve never experienced such a conversion moment. I was continually shaped by Korean Christian love.

Shaped by Love as a Child

It’s funny the things we remember that shape us: the things that made such a lasting impact on my life and faith were the little moments that seemed so natural and love-filled.

I remember how affectionate my dad was. He would kiss me on the cheek as he dropped me off in preschool, and those kisses were so slobbery that I would wipe it off with the back of my hand and then have to wipe the back of my hand onto my pants, almost as if the amount of chim (saliva) left on my cheek was evidence of how much he loved me.

I remember my mother instilling within me a pride for her heritage. When my brother and I first started to speak English to each other, we started to speak English to my mother, too. She refused to reply unless we spoke to her in Korean. We speak Korean to this day. Umma told me to be proud of being Korean. One day, a few years later, she told me I’m Korean and American and no one could tell me differently. I didn’t know her motivations for the slight change, but it stuck with me.

I grew up assuming that female pastors were completely normal even before I saw any personally.

I remember how open to diversity Umma and Appa were. She was comfortable with and struck up friendships with the moms of my classmates, even sharing dieting tips, regardless of their race. I remember Appa talking about a female pastor without any hint in his tone that that this was unusual. I grew up assuming, based on his reaction, that female pastors were completely normal even before I saw any personally. We were once at a church picnic when a Latino neighbor saw our congregation praying in a circle and asked to join us using body language. Despite a distinctly scornful look from one lady in the congregation, I remember Appa joyfully inviting him to join hands with us.

I remember the ways my parents taught us not to be pushovers. Appa believed in standing up for himself. One night at a fast food drive-thru, an employee heard Appa’s choppy accent and mocked him. This was not a wise move. Appa was no fool and he was certainly not a “grin and bear the humiliation” type. In that Korean accent, he scolded the employee, called him out on his bigotry, and put him in his place. Umma told me that fighting back was OK because while Jesus said to love and forgive, he didn’t call us to be a doormat for bullies.

I remember my parents frequently telling us, “I love you.”

I remember my parents frequently telling us, “I love you.”

I’ve been told that my experience is not typical of Korean or Asian families. But this was typical for me, and it was certainly my Korean upbringing. Did I mention Appa was a moksanim (pastor) and Umma was a samonim (pastor’s wife)? My parents weren’t perfect, but their overarching ethos and actions of love, affirmation, and even resistance molded me and my understanding of what is at the heart of Christian faith.

Shaped by Love as a Church

We can’t deny who we are, where we come from, and the life that was given to us by the Korean American community.

We are open to constantly exploring and challenging our faith. There is no question we won’t wrestle with and no doubt we aren’t willing to engage. We care deeply that whatever beliefs we are unsure of, we can be sure that God loves all of creation deeply and desires for us to have a just and compassionate world.

We exist, not as a reaction to conservative Christianity, but because we have experienced faith, love, affirmation, and community in a way that was life-giving.

We exist, not as a reaction to conservative Christianity, but because we have experienced faith, love, affirmation, and community in a way that was life-giving. As a result of this experience, we feel deeply committed and called to creating a faith community that can provide that for all people, including those who have been ostracized by the church. We know the importance of resisting injustice when so many are experiencing oppression and harm.

Perhaps not so coincidentally, the original group that helped bring about HA:N had a largely United Methodist background in the formation of their faith.

We are United Methodist. Our Annual Conference of the UMC continues to support our church knowing full well that we were started by Korean Americans who were not shy about being progressive-minded and LGBTQ+ affirming and inclusive. Perhaps not so coincidentally, the original group that helped bring about HA:N had a largely United Methodist background in the formation of their faith. And though there were certainly moments of trauma in the church experiences of many of our folk prior to forming HA:N, at the core, HA:N UMC exists today because of the experiences and glimpses of love and affirmation that have shaped our faith and identity through the Korean and Korean American Church and even United Methodism.

Only a month into my journey with HA:N UMC, we were present at the Special General Conference to witness the traumatic passage of the so-called “Traditional Plan”, which would increase punitive measures against LGBTQ+ clergy and laity, and against Annual Conferences and bishops that didn’t crack down on any LGBTQ+ participation that didn’t require a denial of their selfhood first. We were there in person because we knew that the UMC and our LGBTQ+ siblings, especially Asian American siblings, should know that there are Asian American congregations that have open hearts, minds, and doors.

We have confidence that God’s love and a faith community like HA:N committed to sharing and being shaped by that love will make a life-giving and even life-saving impact for generations to come.

We are the Church. We are optimistic as a faith community that others will join us in sharing this culture of God’s overflowing love that can bring healing and hope in the midst of trauma. We don’t know what will ultimately become of the United Methodist Church. There has been some indication lately that there has been a massive rebellion against the harmful policy of the “Traditionalist Plan”. Regardless of what happens, we have confidence that God’s love and a faith community like HA:N committed to sharing and being shaped by that love will make a life-giving and even life-saving impact for generations to come.

Rev. Daniel Seunghyun Cho (he/his/him), a native of Chicago, is spouse to the brilliant Rev. Hyemin Na and father of two amazing children. He is the pastor of HA:N UMC, a new progressive Korean American church start on the Upper West Side of Manhattan. He loves the Bulls and BTS and is glad at least one of the two are having success.