So That All May Flourish

Part of 8 of in
By Danny Cortez
Illustrations by Janice Chang
May 05, 2018 | min read
Part of 60: Here's the Thing
3 Snaps
3 0 Snaps
Oops! Something went wrong while submitting the form.

In February of 2014, I delivered a sermon to my Southern Baptist church, sharing that I had changed my mind on same sex marriage. I no longer believed that Scripture taught that it was wrong to be in a gay or lesbian relationship.

As you might guess, it became a point of contention. Five months later, our church went through a split, and we were dismissed from the Southern Baptist Convention. Those who stayed with the church decided to adopt a “Third Way” approach where we acknowledged that there were different beliefs regarding human sexuality. But we also believed that this shouldn’t divide us. Our church now allows leaders to hold a traditional or affirming view regarding LGBTQ identities. We have chosen to respect each person to live out their convictions.

We have chosen to respect each person to live out their convictions.

As I think about my theological journey, I know that there were key moments that allowed me to broaden my perspective. Much of it was engaging deeply with diversity and how we are able to understand those who are different from us. But this didn’t begin with conversations with LGBTQ people. Rather, it began many years ago with seeing differences within Asian and Pacific Islander (API) communities.

Many APIs occupy some kind of space that isn’t predominantly API. Oftentimes, we are used by a company or organization we are a part of as a badge to demonstrate the organization’s commitment to diversity. I listen to white pastors who will boast how “ethnically diverse” their congregation is, highlighting the number of people of color they have. When I ask how diversity plays out in the congregation, I often receive an ambiguous answer.

Instead of celebrating diversity, “ethnically diverse” churches become places that perpetuate white supremacy. What routinely occurs in so-called “ethnically diverse” congregations is that the upper level of leadership is occupied by white cisgendered straight men (of course there are exceptions to this). It then becomes like a Hollywood movie where the lead character is white and there are token Brown or Black friends to support the main character. When the leadership is predominantly white, the culture is also white by default. As a result, everyone else is forced to assimilate. This is a constant problem in many Christian churches. It centers whiteness and erases people of color through assimilation.

This is a constant problem in many Christian churches. It centers whiteness and erases people of color through assimilation.

Many years ago, the Southern Baptist Convention assembled API pastors for a two-day symposium in Atlanta to address the problem of second-generation API people leaving the church. There were five Koreans, four Chinese, one Vietnamese, one Malaysian, and myself — a Filipino pastor. A Korean pastor was nominated to moderate the symposium. As we talked about the various issues in our churches, the Korean and Chinese pastors brought up the dynamic of having an English-speaking congregation along with their Korean or Chinese language church. Because there were nine pastors (Korean and Chinese) who shared the same situations, they were able to interact with one another in a dynamic way.

However, whenever the Thai pastor or myself brought up an issue, it was often met with very little conversation or silence. It was clear that my experiences as a Filipino pastor were foreign to theirs.

At the end of the symposium, there was a time for feedback. The Korean and Chinese pastors all felt very positive about the symposium. I, on the other hand, felt invisible. So my suggestion to the organizers was that if they wanted to tackle the diverse issues of API congregations in the Southern Baptist Convention, there had to be more equal representation or else certain API experiences won’t be addressed. Unfortunately, the symposium wasn’t able to nuance the differences within API cultures, and therefore, the opportunity to understand the vast differences were diminished.

The lesson I learned from Atlanta was that as a pastor, I carry much of the power and influence at my church. I had to learn the dynamics of those who had power and those who were being minimized. I am a naturalized second-generation Filipino American, straight, cisgender, married, non-divorced man who is a father to four children. I am a homeowner, educated, and am able. I see the world through this unique set of lenses and the issues of importance will always be more noticeable when it intersects with any of my identities. People who share my identities will be more relatable to me and would therefore have more accessibility to me — the one in power.

As a pastor, I carry much of the power and influence at my church. I had to learn the dynamics of those who had power and those who were being minimized.

As I began to be aware of who I am and the space I occupied, it caused me to ask questions about who else flourished in the space and who didn’t. Whose voices weren’t being heard? Who isn’t represented? Who is different from me? Who has left the room? How are women being silenced in the church? Why do LGBTQ people not feel safe in my church? Why have many of them moved on? There was a definite realization that LGBTQ people were minimized and even threatened.

How are women being silenced in the church? Why do LGBTQ people not feel safe in my church?

What is especially difficult in API churches is that many other factors contribute to the silencing of LGBTQ people. APIs tend to reinforce the idea that family problems should never be made public, especially anything related to sexuality. There is this constant fear that family secrets will bring shame to their families. Because of this, LGBTQ people don’t have permission to reach out for help. This leads to isolation and depression.

APIs tend to reinforce the idea that family problems should never be made public, especially anything related to sexuality.

Along with this, the idea of sacrificing self for the well-being of the family is encouraged. In order to make the family happy, one’s own sexual identity is repressed. Many API children are raised with the notion that our parents have done so much for us and that it is our responsibility to not put any undue burden on them. For an LGBTQ child to come out and bring shame to the family would be seen as being ungrateful for all the sacrifices their parents have made.

There aren’t a lot of healthy examples of API faith communities that have reached out to their LGBTQ family members. LGBTQ people are fighting an uphill battle to be loved and accepted. Our culture and ethos makes it almost impossible for someone to come out and thrive. I don’t think straight people can ever understand how exhausting it is to be closeted.

There’s a reason why Jesus often crossed social boundaries. He did it to align with those who were marginalized and excluded. Jesus made it a point to even leave the 99 in order to pursue the one that was on the outside.

Jesus made it a point to even leave the 99 in order to pursue the one that was on the outside.

My prayer is that we will learn how to create safe spaces that will allow our LGBTQ siblings to flourish in our communities. 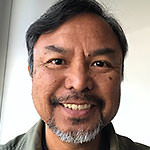 Danny Cortez is a co-pastor of New Heart, a church that was dismissed from the Southern Baptist Convention for adopting a Third Way approach on disputable areas of theology and practice, especially in regards to LGBTQ inclusion. He co-founded My Refuge House, a 501 (c)(3) non-profit ministry that restores survivors of commercial sexual exploitation (CSE) and abuse. He currently serves as a board member of Q Christian Fellowship (formerly known as The Gay Christian Network). He also works with the National Queer Asian Pacific Islander Association (NQAPIA) to help API families toward acceptance of their queer family members. He is also involved with the Union of Affirming Christians. He serves regularly as a hospice chaplain with Evergreen Hospice. He earned his master of divinity at Talbot Theological Seminary and is a graduate of Arrow Leadership, BC, Canada. He lives in the Los Angeles area with his wife Abby and their four children.