Taking it All Off the Altar

Jewish and Christian lore shares with many Asian storytellings the fable of the selfless sacrifice. As children, those of us who grew up steeped in Jewish and Christian stories know the tale of Isaac: the long-awaited, deeply beloved son of Sarah and Abraham who ascended the mountain with his father to be offered as a sacrifice to God in demonstration of his father’s faithfulness.

Chinese folks like me may recognize parallels in Isaac’s predicament to the story of the jade rabbit — analogous to the Indian story of the selfless hare. In each version, three animals are tasked to bring food to a spiritual elder disguised as a beggar. The first two animals give sacrificially of their own food. But the rabbit, with no food to give the spiritual elder, offers its own body as food.

In some versions of the story, the rabbit throws itself into the fire and is rewarded posthumously with eternal life or glory. In other versions, the rabbit is saved by the revelation of the spiritual figure in his true form. In each version, the rabbit’s fate rests upon the mercy of the one with power. In the story, we’re asked to seat ourselves in the character of the rabbit: would we have such faith? Would we go to our deaths to satisfy the hunger of our gods?

Like the rabbit, Isaac is subject to the mercy of a figure of power: his father Abraham. Some mainstream Christian interpretations focus on Abraham’s faith — that he was willing to murder his child to prove his devotion to God. In this story, the actor with whom we’re asked to identify is Abraham. Abraham has a choice here: whether to kill his son for the hunger of God. But whether all’s well that ends well is not for the empowered to say. In this case, it isn’t for Abraham to say.

Some Jewish poetry expresses confoundment at Abraham’s actions, intimating that he only agreed to the deadly plot because he was trapped in a dream state. ‍

The poet Haim Gouri wrote, “The old man raised his head. Seeing / that it was no dream and that the angel / stood there — the knife slipped from his hand.”‍

And the poet Amir Galboa wrote, “And I wanted to cry out; writhing not to believe / And tearing open the eyes. / And I woke up. / And bloodless was my right hand.”

In both pieces, the poets confront the inexplicable horrors of the Holocaust. How could God allow for the destruction of Isaac and on such an interminable scale? Some Jewish interpretations of this scripture draw parallels between the fates of the Jewish people during the Holocaust and the fate of Isaac in Abraham’s great dare. The reader’s gaze is drawn away from the agency of Abraham and to the tragedy and innocence of Isaac. To Isaac, what is the reason for his suffering? Where is God’s justice in his father’s faith-fueled hallucination?

The Temptation of Atonement

The Christian temptation here is to read the story of Jesus’ crucifixion the way we read the story of Isaac: to fix our attention on a seemingly willing and faithful sacrifice offered to a God who may not withdraw the threat of violence. If God is good all the time, then God’s violence is divine — isn’t it?

A popular Christian interpretation of the cross tells us that Jesus was sent to earth to die an atoning death in our place — that his extraordinarily violent death appeased a God who could not bear humanity’s sinfulness. That theory is called penal substitutionary atonement, and for most of my Christian life, I thought this was the only way to view the cross.

It is, however, only one particularly loud and strongly held view with staying power in “Western” Christianity because it aligns well with Western Christian habits of conquest and subjugation. Like many of the evangelical Christians around me, I was grateful for Jesus’ execution because it represented God’s mercy upon the rest of us. Week after week, and half my weekdays, I sang songs about being washed in the blood and covered by grace. “Thank God it wasn’t us,” the songs implied. “How loving is a God who would spare us — who would exact his vengeance on another.”‍

For the ends of becoming a Christian, I strove to undo my queer identity. I listened as a megachurch pastor of a majority-white church preached that he would never teach multiculturalism to his children. I judged loved ones who’d exercised their right to bodily autonomy.

In those early years of Christian faith, I became my most un-Christlike because I believed that these markers of identity were worthwhile sacrifices for the ends of calling myself a Christian. I internalized and weaponized judgment toward myself and others. In the same way I believed Jesus to have taken on shame and sacrifice through the crucifixion, I became a willing participant in shame and an arbiter of punishment. What ended “well” — my relationship with the Christ — was not indeed well.

But there are perhaps as many ways to understand the cross as there were individuals crucified by the Roman Empire. And what we believe about the cross says more about us than about God. The cross is a tragedy of individual, communal, and cosmic proportions upon which we foist our biases, our hopes, and our worldviews.

The danger of this interpretation of the cross — of the theory of penal substitutionary atonement — is that it steeps us in an unsettling expectation of violence. If God can prescribe and enact violence, then why can’t we? If the ends of violence are salvation, then why interrogate the means? If all is good in the end, why fret the details in between?

Theologian and activist Rita Nakashima Brock expands upon the anatomy of this theology: “Atonement theology constructs salvation as a moral injury cycle that ensnares people rather than freeing them from it. It stirs up fear and dread of eternal punishment; elicits guilt, shame, sorrow, and remorse for sinfulness; requires confession and repentance to receive forgiveness; and offers redemption through a crucified innocent victim whose murder sinners caused ... ”

The belief that Jesus’ death was orchestrated for our salvation helps us to ascribe meaning to meaningless suffering. But when we ascribe meaning, we risk becoming arbiters of meaning — judging those to whom tragedy happens or celebrating when tragedy has befallen someone else and not ourselves. “All’s well that ends well” can sound as pithy to a friend in the midst of tragedy as “everything happens for a reason.” ‍

But even in meaninglessness, there is good news (with a lowercase g). That good news is found in the message that preceded Jesus’ death: his life. Jesus lived in a way that subverted our expectations of violence.

Without asking if they deserved it, Jesus healed those who needed healing and he raised the dead. He subverted the empirical reign of violence with reckless compassion. To Jesus, the process of progress mattered. The people along the way to progress-making mattered. To Jesus, the means were the ends. And to Jesus, not all could be well just because it ended well.

To Jesus, how we arrive at justice matters. He was not seduced by Satan’s offer of power and fame when the two met on the mountaintop. Nor did he ever justify another’s suffering with pithy responses. He never justified their everyday experiences of violence.

The story of Jesus’ own sacrifice, and of Isaac’s and the jade rabbit’s, can feel like a balm to our own and others’ suffering. But suffering is not always a test of our faith. And it is certainly not our calling.

Perhaps Jesus viewed the cross more like this: the everyday violence of the Roman Empire and our own western christo-centric empires must be shaken and dismantled to prevent more deaths like his own — to prevent the extinguishment of Christ in us all. 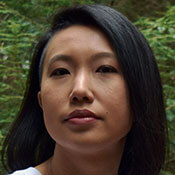 Ophelia Hu Kinney (she/her) is a second-generation Chinese American living in Maine with her wife. She's the Director of Communications at Reconciling Ministries Network, and she's on staff at HopeGateWay, a vibrant and justice-seeking congregation in Portland. She writes to wrangle faith, identity, and the big little things.