Teaching Art as a Medium for Hope in Kenya

In 2013, I painted a mural on the walls of a school in a slum on the outskirts of Nairobi, Kenya. It felt like an act of prayer, done on my knees, with the near-reverent sound of children’s voices reciting lessons in the background.

The mural was a raw and immediate response to what I saw while walking the streets for the first time and quietly observing the beauty and the poverty I couldn’t yet comprehend, the vast stretches of rusted mabati roofs, the way the sun lingered heavily as if reluctant to enter or leave a day. I didn’t understand it at the time, where exactly the imagery came from or what it meant, but in time it would come into focus and resonate more fully.

In an unexpected whirlwind of opened doors, I returned to Nairobi in 2014 to stay for the next 3 1/2 years, teaching art in a classroom of my own that I would labor to create and that 200 students would pass through every week. The school I taught at was built by missionaries in response to the complex issues they witnessed while living in Kenya for several decades. They believed that education was a powerful tool of transformation in addressing what they often felt powerless to address on their own — the widespread suffering and injustices inherent in the region’s systems and history.

During my time there, I was also deeply sobered by the brokenness of humanity and the searing questions it posed, while working out how to respond in dignifying, hopeful, and effective ways to both the wonder and suffering that were evident in breathtaking measures every day.

In my beloved classroom, which was mostly made up of sheets of metal, slabs of wood, and mazeras floors with rainwater leaking everywhere, I set out with a simple objective: to teach art lessons with the hope that art could create space for dialogue, connection, and exploration of deeper aspects of ourselves. I wanted to create an environment that was structured enough that students fell into the comfort of a routine: learning technique, skills, and the rules of drawing, composition, and color. Nested inside that structure, I encouraged them to be confident in their ability to uniquely engage in the creative process.

I set out with a simple objective: to teach art lessons with the hope that art could create space for dialogue, connection, and exploration of deeper aspects of ourselves.

I watched as my students marveled over the infinite variations of color they could mix out of red, blue, and yellow paint; I saw them grow confident in the way they could put down lines on paper, and then as the year passed, how they debunked many fears about art and what they were capable of — and perhaps most of all — how valuable their voice and their unique perspective was, even if just to me.

Some days I’d hold up an image at the start of the lesson and ask, “Who can draw this?” Nobody would raise his or her hand. “Nobody thinks they can draw this? Today you will find that what often looks very big and difficult can actually be broken into many small, doable parts.” By the end of the day, everyone would have it drawn by hand on their own paper, and they would be delighted and flabbergasted by their work and want to take it home immediately to show their families.

“Today you will find that what often looks very big and difficult can actually be broken into many small, doable parts.”

Another art project that was well-loved by my students began with a conversation about their dreams — any one thing they hoped to see happen in their lifetime. Discussions and drawings would range from wanting to eat pizza every day, to seeing their parents again, to peace on the streets of their home country. The most powerful thing about this project was that each student had the space to name their dream, to envision it vividly in their minds, and then to represent it visually on paper to share with others.

One of my students came from Burundi midterm, during a time when conflict was turning violent in the capital. She had an effusive afro, and liked to hang around boys and beat them up on occasion. After a few weeks of swaggering around the classroom, I found her slowly letting down her guard in the art room. She began to look for me between classes or during lunch, asking if she could paint, but I think she just wanted to talk to someone who would listen.

Njeri (her name has been changed to keep her anonymous) told me many stories as she spread color across paper. Her father was assassinated by political opponents when she was young. Her mother later abandoned her. She was then raised by her aunt. When her aunt could no longer take care of her, she was left in Nairobi, staying with a prayer partner of the founding missionary of our school.

As I spent time getting to know her, she began to share her love for spoken word, and one day asked me to practice with her. I started watching spoken word videos at home and practicing with her during lunch, learning as I went. She wanted to perform it for chapel, and she practiced that same spoken word with such fervency, as if her ability to anchor herself and shape meaning and hope out of her circumstances hinged upon this very performance. She loved it and was exceptionally good at it. And I was heartbroken when she was suddenly relocated once again and left without a word. I suppose saying goodbye had become too common or too hard for her.

Njeri was one of my many students who were discarded and abandoned by the people who should have loved them, but had too many troubles of their own. This hodgepodge of students would often gather in the art room, like lost sheep, and I would listen to their ideas, dream up new projects with them, and remind them of their worth given by their Creator. There were many times I’d go back home at the end of a long school day, wondering what else I could do and imagining things as absurd as adopting them, anything to pluck them out of whatever rejection they were about to weather again, finding ways to create an environment where, in their critical years of development, they could grow up and always know: You are seen, you are valuable, and you are cared for.

It was in that remarkable space we called the “art banda” that I witnessed how children are like plants; the shape of their growth depends on what kind of water and sunlight they grow under. As the art banda became a site of gathering, nurturing, and creating, I realized that the most powerful thing art did for us was to give a reason to slow down, to take the time to see what others were saying, to confidently express ourselves, knowing that we would be valued and not embarrassed — and once those things were established — to be able to imagine things anew.

The most powerful thing art did for us was to give a reason to slow down — to be able to imagine things anew.

In the brief months or years I spent with each student, I hope I was able to plant even the smallest seed of care. I also wonder if this was too little, if there were other things I could have said or done. But what I have seen again and again is that when a child believes that she is seen and is worth caring for, that belief has unparalleled power to allow her to bloom, to create, and to see her life with new eyes.

As I prepared to return home last December, cleaning and tidying the art banda for the very last time, I thought again about my hope for the many students I was privileged to teach, and found myself coming back to that mural I painted years before and the caption I had written for it:

“This is an open-air landscape where children run free. Even at night they are safe to run. The stars follow them, because they are children of Abraham, and God has filled the air with the light of His promises. They run toward the sun and the ground glows beneath them. Light diffuses through the world. The world is colorful. The air is clean. The land is rich, saturated with the dreams of the children, which bubble up, like impressions of the rising sun.” 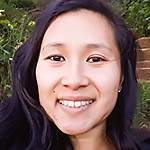 Melanie Chan is transitioning back to life in California after serving as an art teacher and missionary in Kenya. She graduated from the University of California, Berkeley and is passionate about story-telling, mental health, accessibility of the creative process, and interpersonal relationships across boundaries. She loves finding the extraordinary in the ordinary.