The Cost and Luxury of Disinheritance

Part of 7 of in
By Sandhya Jha
Illustrations by John “Enger” Cheng
Jan 15, 2018 | min read
Part of 59: A Peace Apart
8 Snaps
8 0 Snaps
Oops! Something went wrong while submitting the form.

“Your cousin Smriti told us that we were less like husband and wife and more like best friends when we stayed with her in Delhi,” my mother told me after my parents’ most recent visit to India.

“That’s sweet!” I exclaimed, surprised at this sentimentality from my cousin.

“Sandhya, what kind of Indian are you?” my mother shouted in mock exasperation. “That was not meant as a compliment!”

My mother isn’t Indian. She’s Scottish. Scottish Presbyterian, to be specific. My Indian father met her at a college dance when he was studying at Glasgow Tech. My mother had come from the teachers’ college, since there weren’t that many men at her college. Neither of them was part of any radical political movements for integration; neither one was aiming to date someone just to rebel against their parents.

That said, while their relationship was a romance for the ages, it resulted in heartbreak for families on two, eventually three, continents, and the happy ending didn’t look anything like a Hallmark TV movie.

“Well, the other boy I dated seriously was Catholic, and I’m pretty sure I would have been disowned for marrying him, too,” my mother said dismissively, giving a brief nod to the hundreds of years of religious tension between Catholics and Protestants in her homeland.

Poking around in the basement, I found an old letter confirming that narrative. My mother’s mother had written to my father to call off the relationship between him and her daughter. My father was in Canada for a year and wrote letters to my mother at the school where she was teaching; on her Easter break, the postman helpfully delivered the letter to her parents’ home where she still lived, and her secret relationship of over a year was no longer a secret.

My grandmother’s letter noted that the religious differences were too great and he should end the relationship. Apparently, his response was that my mother could choose whether to end things for herself. But in reality, he did call things off. My father’s greatest priority is family unity, and separating my mother from her parents was not something he could take responsibility for.

My grandmother’s letter noted that the religious differences were too great and he should end the relationship.

My mother’s dogged determination led her from Scotland to the south of England where my father was working on a Ph.D. to win him back. And she did.

My father drove my mother to her father’s funeral in 1967; my grandfather died not having reconciled with my mother over her relationship. At the funeral, the only thing her mother said to her was, “The cameo ring is a family heirloom. Give it back.” My mother slipped it off her finger and returned it silently.

They wouldn’t speak again until 1989, and they finally saw each other face-to-face in 1996.

Scots know how to hold a grudge.

My parents married in August 1969 in a small civil ceremony (the church would not officiate an interreligious marriage). A week later, my mother was sobbing in the bathroom. My father had received a thick envelope from India with pictures of his prospective brides. He hadn’t told his parents he had fallen in love and married a white woman.

He hadn’t told his parents he had fallen in love and married a white woman.

A few years later, my father took my mother to India, left her with his friends in Calcutta, and took two train rides and a bullock cart to visit his parents in his ancestral village. He brought his big sister back to Calcutta, introduced my mother to her, and left her with the task of breaking the news to their parents once he was safely back in Britain.

His parents were horrified, and the marriage generated no small scandal. In the years after, my cousins loved introducing my mother to women who had been prospective brides for my father. It was all good fun.

But my father’s side of the family fully embraced my mother by her second visit in 1977. Partly this was because she was the perfect Bengali wife, keeping her head covered, walking three steps behind her husband (that never happened out of the eye of my family, but she knew how to play the role), gamely clambering in and out of buses and train berths in her silk saris. Another part of their reconciliation was because they brought along their adorable 1-year-old daughter (me).

And partly, my family in India didn’t have the luxury of disowning my father.

My family in India didn’t have the luxury of disowning my father.

His family had sent him to Britain to earn a Western salary to send all his money back to his sister and her children; her husband’s salary was not enough to feed and educate eight children. Even before my family in India knew of my mother’s existence, my mother had been living as frugally as my father so that every penny of both their salaries could go back home.

My mother’s best friend from England told me that my mother would only buy carrots with the tops on, because they cost the same and she could get a second meal out of them: carrot top curry. I gather that my parents waited a long time to have their own children, and could only have one then, because they were waiting until their family in India could afford for them to hold onto a little of their earnings. Having a baby isn’t cheap.

I know of a family friend, a woman of limited means and few economic possibilities, who fell in love with her music teacher. But since she did not have many options, she chose to instead marry an unkind man chosen for her by her family.

I have a cousin who ran away with her tutor. Her family, the same family that accepted my non-Hindu white mother, did not need my cousin to survive. They could afford to shun a daughter who married someone from a different caste. My cousin was erased from our family story until my father, an elder with authority, demanded a reconciliation between her and her siblings.

The lesson I could easily take from these stories is that disowning family is a luxury item. The family with more material need finds ways to remain in relationship.

Disowning family is a luxury item. The family with more material need finds ways to remain in relationship.

I find myself thinking about who God calls to be family. Joseph was sold by his brothers because they resented his favored status but were reconciled due to financial need. Jesus told his followers that they would be pitted against their own family for their new faith. Job’s wife turned on him once the economic perks of being married to him had disappeared. Abraham disowned his son Ishmael, then abandoned Ishmael and his mother to almost certain death in the desert.

But I think about God’s myriad responses in these situations: Joseph being able to forgive and embrace his brothers after all the suffering. Jesus’ biological family still journeying with him when he said only those who followed his father’s will were his real family. Job getting a whole new family. Ishmael founding a new nation and a new faith.

And in my family, decades later, my father being invited into his mother-in-law’s house and almost breaking her arm in his determination to wrestle the bill from her when we went out to lunch. My parents sitting in my grandmother’s hospital room during her last week on earth.

My mother taking the cameo ring after my first visit to my grandmother, grumbling about how it should have been given to her instead of me, when I suspect that act was my grandmother’s way of making things right, across generations, restoring an heirloom meant to be passed to the next generation.

And I think about the costs: Joseph’s brothers suffering in a way they may not have if they had held close to a brother whose gifts they resented. Jesus’s followers needing to lose the people, culture, and rituals they loved in order to follow him. Ishmael not knowing a father’s love, and Isaac not growing up with a big brother.

My Scottish grandmother growing old without knowing the sound of her granddaughter’s laughter or hearing about her first steps. My Indian cousins and their sister not getting to grieve together their mother’s unexpected death after 20 years of silence. Years of my mother being warmly embraced by a people not her own, but bearing the rejection of her own people.

Years of my mother being warmly embraced by a people not her own, but bearing the rejection of her own people.

I do think that disowning family is a luxury item — one that we as God’s children can rarely afford.

That Isaac and Ishmael got to reconnect as they buried their father did not fill the holes in their hearts from childhoods apart.

Reconciliation is at best a partial healing with a scar that remains for a generation and beyond.

May God heal the broken bonds. And may we break as few as possible. 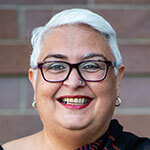