I remember hearing about Columbine growing up — not really much, just tidbits here and there.

Then in my seventh grade Media Communications class, a few weeks before Christmas, our teacher walked in with a grave face and told us that an elementary school had been, for a lack of better phrase, “shot up”. The following days were a flurry of lockdown drills and teachers telling us what to do in case of an “emergency” — but refusing to address the word “shooting”, as if by not speaking of what had happened, it would disappear. That elementary school was Sandy Hook.

Flash forward a few years later, when another shooting occurred in an Oregon community college. My teachers shook their heads and told me how terrible it was. Politicians sent their thoughts and prayers.

When Parkland happened, the first response of my peers and I was that of exhaustion. It wasn’t grief, it wasn’t anger; it was just exhaustion. And more details emerged.

My school had a fire drill just that morning.

And once the realization of another mass shooting began to sink in, we took to Reddit, Buzzfeed, Snapchat, and Twitter. Scrolling right past the new stream of thoughts and prayers, students at my school sat next to each other, watching the videos, reading the firsthand accounts, listening to the pop pop pop of the shots, the muffled screams of the kids stacked next to each other like sardines. What scared us wasn’t necessarily the sounds of the bullets, or the screams of the kids — it was how familiar everything looked. Desks in neat rows, whiteboards lining the room, textbooks piled in the corners. That hit home, because we didn’t have such clear visuals before.

The next day, one of my teachers sat us down in a circle. Taking a deep breath, she steeled herself, and began to rattle off a list of emergency procedures that time and time again had been told to us.

“Take cover under the windows, that way they won’t see you.”

“If I’m not in the class, and you can’t lock the door, take the fire extinguisher and barricade the door.”

“Don’t go down without a fight.”

“If something happens to me ... take care of each other. Do what you need to.”

Moments of silence passed. “Do you guys feel safe?”

No. I don’t. Every single time this happens, I walk through the halls and the classes with a hesitancy, scared, and imagining this scenario playing out at my school. Every classroom becomes a shooting gallery. Every bathroom a backed-in corner. Every gate, a potential bottleneck.

We are the generation of the mass shootings. What happened to life, liberty, and the pursuit of happiness? Peter Wang can’t pursue his happiness. Carmen Schentrup can’t either. Neither can Alex Schachter. Or Helena Ramsey. Or any of the other victims. They can’t pursue their happiness because they are gone. Dead. Shot. Their friends and families don’t want thoughts and prayers. They want them alive.

Call the students leading the #NeverAgain movement naive. Call them rebellious rabble-rousers and troublemakers. Tell them that they have no understanding of the world that we all live in. Remind them that they are mere children. They’re teenagers, argumentative by nature. I would know. I’m a teenager, too. So don’t listen to us, the teens of America, when we argue about our curfew, who we can or cannot spend time with, what we should or should not be doing.

But do listen to us when we say we do not want to die at school. That should not be a difficult standard to set, yet it is a standard America has failed again, and again. You want the students to just be students? First, provide a safe place to learn.

The students of Parkland became adults the instant the first bullet flew. The victims of Sandy Hook are still ineligible to vote, but they can describe what bullets sound like when they fly past your ears and strike down your classmates inches away from you.

James 2:14-16 says this: “What good is it, my brothers and sisters, if someone claims to have faith but has no deeds? Can such faith save them? Suppose a brother or a sister is without clothes and daily food. If one of you says to them, ‘Go in peace; keep warm and well fed,’ but does nothing about their physical needs, what good is it?”

What good is it? What good is tweeting thoughts and prayers, having another moment of silence during a session of Congress, of lowering the flags for a week? What good does it do to prevent this from happening again? Faith did not save those students. Deeds should have saved them, and will save future ones if our country can move past blind faith and do something.

It would have been one thing if Parkland had happened after any legislation was passed to help prevent mass shooting such as these. But the people on the Hill did nothing. As if nothing wasn’t enough, they continued to allow themselves to be puppets, with strings of money controlled by the master puppeteer we call the NRA.

This isn’t my story to tell. I am not a casualty, nor am I a victim, nor do I pretend to reflect the voices of all students. But the students who are victims, who were casualties, who have been unwittingly thrown into the national spotlight, are my peers. And we want change. We are tired. And we are trusting the adults in charge to do their jobs, and that trust is being broken again, and again.

Do not pray for the student survivors. Do not simply sit and send nice thoughts toward Parkland. No one wants those anymore, because they do not prevent these shootings from happening. 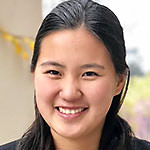 Yumei Lin is a student born and raised in Southern California. She’s an avid reader, writer, and adventurer in her hometown of Los Angeles.