Leaving Calorie Counting Behind to Experience the Joy of Food

ONE APPLE equals 72 calories. That fact, along with my growling stomach and uncomfortably bony body, was enough to cause insomnia. It’s been almost an hour since I crawled into my college dorm bed for the night. My heart is racing; I cannot stop thinking about what I ate.

I cannot stop thinking about what I ate.

That day was a “bad” day, according to my food journal. I had snacked on an apple — a healthy, normal snack for most people. But 72 calories in one apple pushed me over the daily number I had allotted for myself. I couldn’t get that out of my head. My mind began to consider the options to make things right — eat tomorrow’s salad without dressing, run an extra mile around campus, or just skip a meal altogether.

Apples didn’t always have this effect on me. Before college, my mind was primarily on other things, namely my academics and religion. A notorious perfectionist, I busied myself studying to achieve the highest possible GPA, all the while participating in countless Christian activities.

Weekdays were packed with school assignments and volunteer work, while weekends were dedicated to mission projects and service at my church. Failure to complete any of these caused major anxiety; excellency in school and faith defined who I was.

Perfection was the standard, and failure was not allowed. There was no middle ground.

Perfection was the standard, and failure was not allowed.

When I transitioned to college, I eagerly loaded my schedule with more classes and activities than I thought I could handle. Eventually, I found myself in danger of failing a class. Meanwhile, in this new secular environment, I had begun to question Christianity and struggled with doubt for the first time. I was losing my clutch on both academics and faith — the crux of my being. Everything began to unravel.

At the end of that semester, I went home for the holidays; I was exhausted both physically and mentally. My final grades were subpar, my questions about God remained unanswered, and on top of that, I had gained the “Freshman 15”.

My family affectionately squeezed my arms and commented on the extra pounds I had gained while I was away, and suddenly I began to feel an unfamiliar resentment toward my body.

I began to feel an unfamiliar resentment toward my body.

Heavy with disappointment, I wondered if this burden of failure would be lifted if I just lost a few pounds. If I couldn’t be a perfect student or a Christian, perhaps I could have my version of a perfect body.

By the time I started school again, I formulated a strict plan to lose five pounds through healthy eating and regular exercise. Throughout the school year, I rigorously stuck to my plan. Five pounds became 10, 20, then 30, and yet, I still felt dissatisfied. I began to memorize calorie counts, set strict “caloric budgets”, and spend hours at the gym.

My food journal grew thicker, my portions shrank, and the treadmill and I were practically one unit. At church, I could not stop staring at thin girls, comparing their thigh gaps to my nonexistent one. I began to avoid social events with food, fearing that I would be pressured to eat.

I began to avoid social events with food, fearing that I would be pressured to eat.

My weight plunged to two digits, and my once thick head of hair became thin and brittle. My body was always cold; vital functions of my body began to deteriorate. I had trouble sleeping.

I stared at the walls of my dorm. The apple was 72 calories too much.

A BOWL OF STEW

During this time, I sat through many sermons while my mind was occupied by weight-loss strategies. But one Sunday, my ears perked up at these words: “Quick, let me have some of that red stew! I’m famished!”

That was what Esau said to his younger brother Jacob in Genesis 25. Esau had just come back from hunting and smelled the delicious stew that Jacob was cooking. Swiftly, Esau sold his birthright to his brother in order to have a bowl of stew.

In that culture, the birthright was given to the firstborn and promised the recipient double the inheritance, the honor of leading the family, and a covenant relationship with God. As my pastor explained this, everyone could see that this was obviously a terrible trade on Esau’s part. For a single bowl of stew, Jacob had earned all the rights as the eldest child of Isaac. And for Esau? Well, his stomach was satisfied for another four hours before he would have to fill it again.

My heart sank. How did I get here? I completely identified with Esau. Both of us could only think about the food in the pot and what it would do to us. Mastered by food, had I abandoned a relationship with my Father too? Was I missing out on something extraordinary, like a birthright?

My heart sank. How did I get here?

I had convinced myself all this time that perfection in weight loss would follow through on its own promise: to provide the sense of worth that I desperately wanted. Except for a few delusional moments of pride in seeing the number on the scale drop, I didn’t get what I wanted — or what I needed. I had lost much more than weight; I had lost friendships, a joyful personality, and motivation in life. This wasn’t working anymore.

Esau could not reverse his decision, but perhaps I could. Hugging my pointy ribs, I tiptoed my way to God and asked Him if I could reverse my trade — to relinquish control over my weight and rediscover my identity as His child.

I tiptoed my way to God and asked Him if I could reverse my trade.

Making that trade felt like giving away the seemingly purposeful life I knew for an uncertain one. I had a million questions about recovery, and I didn’t even know where to start. What foods would I have to start eating? And would I have to gain any weight? What about exercise? Could I abstain from all desserts and still be in recovery?

God didn’t answer these questions immediately, but He did give me a promise: “But blessed is the one who trusts in the Lord, whose confidence is in him. They will be like a tree planted by the water that sends out its roots by the stream. It does not fear when heat comes; its leaves are always green. It has no worries in a year of drought and never fails to bear fruit” (Jeremiah 17:7-8 NIV).

With this truth in hand, I made the trade and began a long season of recovery. God’s words kept me moving forward, especially when I wanted to give up. Through therapy, my community’s prayers, and setbacks, I begin to identify root causes of my disorder and practice new ways of sustaining my body.

God’s words kept me moving forward, especially when I wanted to give up.

The role of food began to slowly change from being my master to becoming a gift of joy, sustenance, and celebration.

A friend in my dorm decided to become a Christian, so a group of us went out to eat frozen yogurt to celebrate. The sweetness of the yogurt was a perfect complement to the sweetness of the situation. “How sweet are your words to my taste, sweeter than honey to my mouth!” (Psalm 119:103 NIV). That year, we met weekly to share what God was doing in our lives over hummus and chips. Like the Acts church, we “broke bread in [our] homes and ate together with glad and sincere hearts” (Acts 2:46 NIV).

The best part of recovery was that God restored my birthright and I didn’t anxiously “do” Christian things to earn it. At some point in my recovery, I realized how much harm I had done to my body, a “temple of the Holy Spirit”. In that moment, I had never felt more ashamed; however, God revealed to me that He had not rejected me for disobeying. I could only point out countless signs of His grace: people praying for me, my body regaining health, friendships renewed, and His promises to restore me.

As a perfectionist, I had always been confused about God’s grace. In recovery, grace became clear and undeniable. I no longer perceived my birthright as a reward for good deeds, but instead, I began to understand it as an inheritance of unconditional love from my Father.

I no longer perceived my birthright as a reward for good deeds, but instead, I began to understand it as an inheritance of unconditional love from my Father.

Today, I eat normally and enjoy dessert on a regular basis. Food no longer controls me; I am healthy and I am free.

But I’m still learning how to find my value in God, and every year, God addresses parts of my life where I’m stuck in perfectionism – relationships, ministry, career, and more. Each time, He gently asks me to step forward into those scary, unknown places and make the trade again and again.

Disorder to order, He continues to make things right. 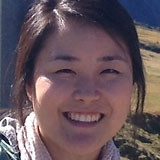 Joyce Lee is an aspiring social worker on her way to graduate school in Berkeley, CA. Previously, she worked at a nonprofit serving families exiting homelessness in Los Angeles, CA.