We Can't Hear You!

White Supremacy, White Complicity, and the Killing Fields They Create

When asked by a reporter in the aftermath of the Christchurch massacre: “Do you see, today, white nationalism as a rising threat around the world?” Donald Trump responded: “I don’t, really. I think it’s a small group of people that have very, very serious problems, I guess. If you look at what happened in New Zealand, perhaps that’s the case.” Like many others, I was not surprised by that response. It was expected. Trump’s docile responses to white violence on colored bodies should surprise no one, especially people of color. With such a response, one can’t help but wonder to whom the terrorist was signaling as he displayed his coded white supremacist hand gesture during his arraignment?

In any case, I was, however, surprised and shocked as I immediately began following the Christchurch massacre. I came across a video of the shooters deadly rampage recorded live. The scenes that followed were injurious! In that moment I felt what little hope in humanity I had secured in the inner chambers of my soul slipping away. It was a demented view of an unspeakable evil. In an eerie, spine-chillingly, and nauseating way it resembled a player view of an arcade or PlayStation shooter video game. This was no game though. On the morning of March 15, 2019, a white male terrorist entered two separate mosques and slaughtered men, women, and children as they prayed. Within 72 hours, and still under the shocking realization of what had transpired under her watch, New Zealand’s Prime Minister Jacinda Ardern expressed that her cabinet was “completely unified” in reforming gun legislation stating that: “Within 10 days of this horrific act of terrorism we will have announced reforms which will, I believe, make our community safer.” Ardern’s condemnation of these attacks was swift, passionately unifying at a time of disbelief and mourning, and demonstrated her commitment to her people regardless of religious or racial identity by pledging to reform the country’s gun laws (an experience foreign to most Americans these days — that is, solidarity with communities of color and religions other than evangelical Christianity, and gun reform laws on behalf of their leadership).

Yet, in the midst of such an passionate response to a national crisis, there was something all too familiar in her description and the rhetorical devices she used to describe her cabinets reaction:

"The individual charged with murder had not come to the attention of the intelligence community, nor the police, for extremism ... I have asked our agencies this morning to work swiftly on assessing whether there was any activity on social media or otherwise, that should have triggered a response. That work is already underway. Given global indicators around far-right extremism, our intelligence community has been stepping up their investigations in this area."

In truth, it was later discovered that the assailant’s social media accounts had disturbing evidence of white supremacist ideals. Ardern’s response, though empathic in nature, inherently demonstrates a flawed system whereby profiling of extremism follows the example set by American post-9/11 Counterterrorism Policy. Such profiling strategies were more recently demonstrated by Donald Trump’s anti-Muslim policies and his retweeting of anti-Muslim propaganda from a British fascist organization. If a white terrorist whose social media accounts demonstrated clear red flags of extremist activity can go undetected, then it is not unrealistic to suggest that white males may not be under the radar at all concerning national security potential threats. This at least seems to be the case in the U.S. where whites can purchase semiautomatic weapons with ease compared to people of color.

In addition, the usage of terms like “far right or extremism” by whites in lieu of the “white supremacist” tag employed by non-whites to describe agents of mass murder disassociates whiteness from its historical trajectory and current insidious configurations. It conflates political and religious components without accountability to the racialist ideals that undergird white supremacist violence. The intentionality of the phrase “white supremacy” by people of color to describe white violence on Black and Brown bodies has deep historical roots in the violent legacy of colonialism and slavery. Yet, the passive language employed by whites in declaring the root of white violence is indicative of how it pervades contemporary society systemically. It is all the more evident when those who stand in solidarity with immigrant communities cannot, like those who stand opposed to the livelihood of immigrant and Black and Brown people, utter the words white supremacy in public for fear of white backlash, especially in the realm of politics.

As my former professor and mentor, the late James Cone would say, “Language is not innocent!” The paradoxical nature of our words to describe white violence highlights this point. On the one hand, in the literal sense, there is certainly nothing far right about white supremacy. There is nothing far right about the murder of Muslims, Black and Brown boys, girls, men and women. There is nothing far right about U.S. policies mirrored by other countries, then perpetuated by media platforms that breeds agents of white supremacist violence. On the other hand, the white progressive gaze, in an effort to amplify a far left agenda — again in a literal sense — have left those they stand in solidarity with far behind, shouting in solitary protest against white supremacy. Consequently, intensifying the thick dystopian smog that suffocates many immigrant communities and people of color they are in collaboration with.

White people, especially those who wish to stand in solidarity with the suffering others, must confront the history of their race. It must begin with the acknowledgement that in the grand race for racial dominance whites have reigned victorious in this contest of superiority because they have and continue to be sole competitor. Like an inmate in solitary confinement left to his own illusory thoughts, the singular competing race and victor runs this imaginary marathon in constant anxiety of being dethroned — an anxiety that incites violent means to an imaginary end. In his central text, “Pedagogy of the Oppressed”, Paulo Freire lays out a framework for such a process in his description of intergenerational violence cultivated and passed on through what he calls possessive consciousness:

"This violence, as a process, is perpetuated from generation to generation of oppressors, who become its heirs and are shaped in its climate. This climate creates in the creator a strongly possessive consciousness — possessive of the world and of men and women ... Fromm said of this consciousness that, without such possession, 'it would lose contact with the world'. The oppressor consciousness tends to transform everything surrounding it into an object of its domination. The earth, property, production, the creations of people, people themselves, time — everything is reduced to the status of objects at its disposal."

The fact is, to date, in the U.S., there have been roughly 111 mass shootings since 1982. Since then, gun laws have become increasingly lenient with little to no legislative reform. There has been a surge of violence against Muslims in the U.S. in recent years intensified by Donald Trump and his administrations mitigating responses to such acts of violence. Black and Brown bodies continue to be viciously attacked and executed daily, by both unrestrained law enforcement and the policies of neo-conservative and neo-liberal politicians. These are the outcomes of a silent, and passive stance by both the current administration and those who claim solidarity with the poor and oppressed. If calling white supremacy exactly what it is — white supremacy — remains a matter of reassuring the safety of white feelings and emotions of either politicians and religious elites, or potential voters, then, Freire was right. Society will continue to be transformed by a culture of domination and violence designed by its oppressors.

As a theologian and clergy, my search for the true essence of the Christian faith has led me to the subversive and blasphemous ministry of Jesus in the eyes of empire and their religious watchdogs. This Jesus speaks clearly to the problem of white complicity. The very essence of Jesus ministry to the poor and oppressed is intentional. Condemnation of evil is not left to the imaginary rather, Jesus is clear as he uses abrasively poignant language to call out corrupt “brood of vipers” by warning them that “on the day of judgment you will have to give an account for every careless word you utter; for by your words you will be justified, and by your words you will be condemned” (Matthew 12:33-37 NRSV). How many more Black, Brown, Asian, Immigrant, Indigenous, Muslim, Christian, and Mexican lives will whites condemn to the evil motives of white supremacist terrorists for the sake of white feelings?

Solidarity with the oppressed begins first and foremost with being the suffering of the world. Prime Minister Jacinda Ardern, more than any leader in the world today, has done so courageously by offering to pay for the funeral expenses of the 50 victims and by promising unprecedented gun reform laws. Her complete dedication to the frustrations, grief, confusion, and sense of loss of her people is commendable to say the least. However, I should also point out that this incident happened on the land, the fanua of the people of Aotearoa — the Maori people’s ancestral lands. Ardern’s nurturing response to her people is in partial a reflection of what happens when pakeha (whites) allow their decision-making and leadership to be immersed in the Mana (spirit) of the Moana (Pacific) people. We know pain. We know loss. We know what it means and what it takes to heal from the devastation of white supremacy. Those elements were on display by Pasefika people who performed the sacred haka, and held various prayer vigils throughout New Zealand following the attacks. Ardern undeniably displayed that as well in her efforts to heal her people.

Nevertheless, the underpinnings of brazen white violence against the disenfranchised of the world deserve nothing short of an intentional highlighting of white supremacy unapologetically as a matter of public discourse, especially by whites. Any intentional naming of the white supremacist epidemic by whites is an intentional and brazen effort to both abolish white supremacy and its far reaching tentacles and abandon the race for racial dominance. Said otherwise, in the words of existentialist philosopher and Christian son, Soren Kierkegaard: “In the Christian terminology death is the expression for the greatest spiritual wretchedness, and yet the cure is simply to die, to die from”. To die from white supremacy is a struggle we must all declare together. The suffering victims of white supremacist ideologies have stopped asking, they are now demanding that white allies and leadership unapologetically proclaim this Good News to the world — only louder so we can actually hear you in the back, and believe you when you stand beside us! 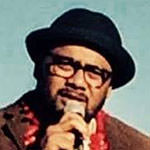 Pausa Kaio (PK) Thompson is a Samoan American clergy, activist and theologian. He is an alum of the Kanana Fou Theological Seminary in American Samoa, Union Theological Seminary in the city of New York, Boston University School of Theology, and is a Ph.D. student at Claremont School of Theology. His scholarly work accentuates the theological discourse, indigenous culture and wisdom, and social justice issues of Samoa, and Samoans in diaspora. His ministry encourages people to be change agents in the world by invoking a more socially conscious ethic of Christian practice.