Where is the Asian American Church During Tumultuous Times?

Part of of in
By Kevin Pacifico Gonzaga
Illustration by John "Enger" Cheng
Jun 02, 2017 | 3 min read
Part of
35 Snaps
35 0 Snaps
Oops! Something went wrong while submitting the form.

The Civil Rights Era was a tumultuous time for our society as many struggled for racial and social justice.

While some Black Churches and some White Churches joined this movement, many Christians stood against the end of segregation and continued to provide theological backing for white supremacy. At the same time, the model minority myth was being spun about Asian Americans; we were celebrated for being politically docile, willing to work hard in the capitalistic system, and uninterested in challenging White supremacy.

Certainly Asian Christians in the U.S. had been socially active for some time. For example, Chinese members of the Chinese Presbyterian Church spoke out against and fought discriminatory laws that were passed in San Francisco in the 1850s. But I found scant examples of Asian American Christian leaders and churches during the Civil Rights Movement, and this intersection appears to be an understudied area of history.

However, I also quickly realized that asking this question is not really appropriate; criticizing the Asian American Church for not having more robustly supported the Civil Rights Movement would be unfair for a number of reasons.

First, the concept of the broad racial category of Asian American was a new concept during the 1960s. The term was coined by Yuji Ichioka in the late 1960s as he pushed for Asian Americans to unite and push for social and racial justice as a unified group. The subsequent concept of an Asian American Church — that is, a broad collection of Churches with primarily Asian membership from a variety of denominations based in the United States — did not develop until later.

Second, Asian Americans were also an extreme minority in the United States, with only roughly 980,000 Asians living in all of the U.S. in 1960. In comparison, there were 19 million Black Americans and 159 million White Americans in the U.S. at that time. To assess the (lack of) presence of Asian American Churches during the Civil Rights Movement by comparison with the Black and White Christian communities is like comparing apples and oranges. The difference in populations meant that even when we did have individuals and organizations that were active in the Civil Rights Movement, they were eclipsed by much larger and more numerous White and Black individuals and institutions.

Finally, any assessment of Asian American participation in the Civil Rights Movement needs to also consider the various challenges of immigration, language barriers, and racism faced by Asian Americans during this time. While Asian Americans families had been living in the U.S. for generations, many were recent immigrants, especially after 1965 immigration law reforms. The challenges associated with immigration likely kept many immigrants from full participation in society, let alone social movements pushing for change. I fear many Asian Americans were prevented from being part the Civil Rights Movement due to these factors and this was misinterpreted or misrepresented as passivity to support the “model minority” myth.

Ultimately, I think it would be unfair to question where the Asian American Church was during the Civil Rights Movement.

However, I think it is fair and far more important to ask where and how the Asian American Church is active now with regards to racial and social justice in our current tumultuous climate. Today there are roughly 20 million Asians living in the U.S., with around 42% of us identifying as Christians. While many in our community are immigrants, many are also established in U.S. society.

We live in a time of dramatic polarization with racial, cultural, religious, and political divisions deepening rapidly. Wealth inequality is at an all time high. Terrorism has been used to fan the flames of perpetual warfare and to erode civil liberties. Elected and appointed government leaders are undermining and destroying the very institutions they are supposed to be leading. 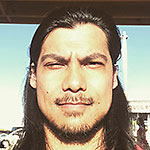 Kevin Pacifico Gonzaga is a graduate of Fuller Theological Seminary and a current graduate student in psychology at the University of Louisville. His research and work is focused on developing strength based approaches to foster resilience in marginalized communities.