Why I Am Episcopalian

I love a good quiz. Years ago, as a young adult, I relished taking free online tests to tell me what religion I should be according to my beliefs on specific issues. Every quiz concluded I should be Episcopalian. I had no idea what that was. In fact, I was disappointed; I wanted the websites to proclaim me Presbyterian.

At the time, I was becoming a regular attendee at a Presbyterian church thanks to the intellectual sermons of a famous preacher-author. I became entranced by their message and convinced myself I must be Presbyterian. I dismissed the survey results as false positives based on flawed algorithms.

Of course, all outputs are as flawed as the input.

Reflecting on it today, it’s no surprise that every result was so consistent. I believe women can and should be allowed to be clergy. I support equal rights for same sex-relationships. I love the arts, history, and tradition. Many Christian denominations remain quiet, if not explicitly against, these ideals despite attempts to appear otherwise through loud music, hipster 20-something singers, and hypnotic lighting systems.

I remember dipping my toes into this particular Presbyterian church’s membership class where somebody was brave enough to ask about their stance on gay people. The deacon had a practiced and flat response: It’s a sin like any other and you can be a member as long as you keep it to yourself (read: be celibate). Don’t ask, don’t tell. And don’t forget to tithe.

The same church also refused my offer to teach a yoga class on account of an article by John Piper, a renowned evangelical, who determined that yoga is of the devil. He also noted that he has never tried yoga himself. These moments taught me that even the most lauded organizations and individuals fall short. We all do. It’s just easier to point it out in others.

As someone who was born as an “other”, growing up Asian in a 99 percent white neighborhood, I recognize that I am rooted in an unhealthy desire for acceptance. This means rejection is both painful and motivating. I continued to remain faithful to this church that railed against my values because of thought-provoking sermons and the thousands of other young Manhattanites at coffee hour who seemed to have no problem with this theology.

Subsequently, my career began to unravel. I ended a tenure at a major media company, where I had advanced from intern to senior vice president in eight years. Most people assume I scraped and clawed my way to the top. Nothing could be further from the truth. It was more like being the last person on the Titanic. When three out of five people in the department gave my boss notice, he burst into my office to make sure I wasn’t on my way out, too. The thought never crossed my mind. I was living my dream of working in television, but the end was near. I will never forget when we missed a budget estimate and I suggested, “Well, good thing we make shows for more than just the money.” Everyone stared dumbstruck at me.

Choosing to leave was the toughest decision of my life. The corporate culture had spiraled into something that could no longer justify a paycheck, benefits, and all the other reasons the world tells us we need a job. My spirit was crushed. There were no words left except, “Goodbye.” I was privileged to be able to say it.

Then, the other shoe dropped. I called the pastoral care hotline and was told it would be six months before someone could talk to me. My landlord raised my rent. I started seeing a therapist, who soon discovered she had cancer and passed away three weeks later. My artist boyfriend, who supported me through this critical pivot, came into some money and surreptitiously dumped me because I didn’t have a job. He said I was holding him back. On top of everything, it was Christmas.

I stayed in the city to lick my wounds. Knowing I was in hiding, a friend dragged me to a Christmas Eve service at an Episcopal church. She wanted to scope out the priest who was married to the executive director of a nonprofit board she had joined. She didn’t want to go alone. I had nothing better to do.

It was nothing I would have planned, but it was exactly what I needed. Two small differences stuck with me that night that led me to go back Sunday after Sunday since then: the service and the people.

The Service. I had walked in numb and empty. I could barely convince myself to get out of bed in the morning, much less sing “Joy to the World”. At a time when I had nothing to say to anybody, the service supplied the words. There is a distinct rhythm to Episcopal worship: call and response, sitting and standing (sometimes kneeling if you wish), as well as singing and silence. Communion is shared every week.

Unlike our Presbyterian cousins who pass a plate, the invitation here is to individually approach and receive bread and wine from the priest. And unlike a restaurant where one can sit back and be served, you must come forward to the table as you are able. Everyone is invited. In the Episcopal Church, non-believers are welcome to approach and receive a blessing all the same. The priest sees and serves everyone, one at a time. The coming together of people soon becomes a procession moving as one body propelled by a common spirit. It struck me as both a personal affirmation and public celebration.

I don’t know the technical theology, but it seems to me a powerful metaphor for how God feeds each one of us. There is enough for everyone. We share from the same plate. We drink from the same cup. We are transformed by the same God — together and alone.

A common liturgy, refined over centuries, is also repeated at Episcopal churches across the country and around the world. The words made me feel a part of something whole, even in my failure. Not just as someone attending, but as a participant in this story of hope in the face of helplessness, peace in the face of frustration, and love in the face of anger.

The People. This parish attracted a ragtag group of people. All were welcome: homeless and homed; families and singles; Nigerian, British, and Midwestern American. It was more than just a tagline. People showed up, felt welcome, and came back. This was in stark contrast to the more homogenous churches of my past. For example, I had also previously attended a nondenominational church created for and led by young Asian Americans. When an older, stout man from Chinatown started showing up every week at that church, the women whispered to their husbands and boyfriends that they felt uncomfortable. Consequently, the group conspired to oust him. I didn’t stick around to see if they were successful.

The Episcopal Church I stumbled into holds a history of community engagement and runs a homeless shelter inside the church every Sunday night, as well as mail services, showers, and medical treatment during the week. Everyone worships together as one. I’m not saying it is easy or comfortable. Most of the time, it’s neither. The stinging scent of incontinence has made me cringe more times than I would like to admit.

Nevertheless, I think this is the closest thing to heaven. A heaven that is more than just soft clouds, streets paved with diamonds, and families that get along. I hope it is all that and more. A heaven that includes all people, finally reconciled to a new life regardless of circumstances or shortcomings: a place where everybody belongs … because none of us deserve to belong. I see glimmers of heaven on Sunday.

Now for the bad news: The Episcopal Church is not perfect. Despite approving the ordination of women to priesthood and proclaiming equal claims for LGBTQIA+ persons as a matter of resolution in 1976, Episcopalians are still divided on what this looks like in practice. For example, in 2003, there was a sizable and global backlash against the first gay bishop elected by the New Hampshire diocese. He wore a bulletproof vest to his consecration. Indeed, the church has its fair share of scandals, infidelity, and racism. And the truth is today, most Episcopalians in most states are white and upper-middle class, lending to its own set of conscious and unconscious inclinations. Moreover, Episcopal Church attendance is down. Way down.

Simultaneously, some evangelical churches are on the up and up, including a certain Presbyterian church that I used to attend. When you have a charismatic leader, anything is possible. The question is: Who is that leader?

The leader I follow was single, poor, homeless, disfigured, and unpopular to his death in the end. If my church were to see a similar fate, then I trust that God has a plan for that, too. In the meantime, there is no other place I’d rather be.

Sometimes, those online spiritual tests get it right after all. 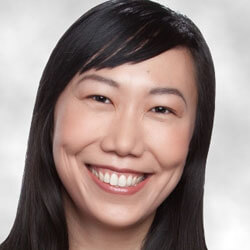 Meghann Wu is a writer, management consultant, and founder of Edittress.com: an online mentor network powered by video chat. Her background includes global strategy, corporate development, as well as mergers and acquisitions for Fortune 100 companies. She holds an MBA from Columbia University and a B.S. in Computer Science & Statistics from the University of Illinois. She lives in New York City.