I’m a freshman church planter. But New Abbey, our small congregation, is not your typical church plant.

Every Sunday, we follow a liturgy: We read texts from a lectionary, corporately confess our sins, hear words of assurance, recite the Apostles’ Creed, partake in communion (which has a formalized order), and pass the peace.

Many church planters are coached to employ an attractional model, but I have chosen to emphasize liturgy. These two models are not mutually exclusive, but evangelical churches typically do not incorporate traditional liturgy into their church life. My decision to use liturgy came from years of personal and communal struggle.

For Filipinos, liturgy signals Catholicism — which, depending on your upbringing, is either positive or negative. In the spiritual consciousness of the Filipino, you’re either Catholic or you’re not. There is no neutrality. Either you claim the religion of your lola (grandma) or you follow those weird born-again types in the “other” church down the street.

In the spiritual consciousness of the Filipino, you’re either Catholic or you’re not. There is no neutrality.

To “convert out” of the Catholic Church is drastic, carrying cultural and familial consequences. But that’s exactly what my family did — crossed over into evangelicalism. All of us, my mom, dad, sister, and I, were rebaptized in a small, growing Filipino Baptist church. I was 12 years old. And it was there, in a church filled with ex-Catholics, that the majority of my faith was formed.

We were taught early on that “Christians” and “Catholics” were two distinct and separate groups. Much of our local methodology, and Filipino evangelicalism in general, focused on converting Catholics to Christianity. Filipino evangelicalism responds to what is recognized as “Catholic” in the Filipino community. There are several rituals practiced in the Philippines that cannot be found elsewhere in global Catholicism. One ritual occurs during Holy Week in the Philippines, penitencia (literally “penance”), a practice that begins with self-flagellation and culminates with the penitentes being nailed to a cross; this is considered a “devoutly Catholic” practice, even though it runs contrary to Catholic teaching.

Unfortunately, the failure to recognize the difference between theology and practice has led many Filipino evangelicals to react against anything that even appears to be Catholic.

The failure to recognize the difference between theology and practice has led many Filipino evangelicals to react against anything that even appears to be Catholic.

When I tell people that I’m the pastor of a new congregation, I am frequently asked, “What kind of church is it?” Usually, this question is asked in advance so the visitor will have some idea what to expect. But I’m frequently asked by those who have already visited. Much of the post-service curiosity and confusion is due to our liturgy. Determining whether we are Catholic or Evangelical is the real inquiry behind the question.

As mentioned earlier, Filipino Protestant methodology has been largely shaped by the need to differentiate from the Roman Catholic Church. Hard lines have been drawn throughout the centuries and unfortunately, Evangelicals have often thrown the baby out with the bath water, considering many historical forms of worship “Catholic” and thus, illegitimate and unbiblical.

Evangelicals have often thrown the baby out with the bath water, considering many historical forms of worship “Catholic” and thus, illegitimate and unbiblical.

So it does get confusing when we affirm the Apostles’ Creed that states we believe in “the holy catholic Church.” But what proceeds out of this confusion are the most fruitful conversations as I take the time to explain the difference between Catholic and catholic.

The beauty of not being in a single category is that we have space to explain exactly what we believe, rather than ending a conversation by naming a denomination. I want people to convert to Christ, not a denomination. Interestingly, once people are coached through the nuances between Catholic and catholic, a redemptive work happens: Former Catholics appreciate their former upbringing and Evangelicals discover a treasure trove of ways to worship and respond to God.

Clearly, New Abbey does not fit into any one category. Categories have their limitations; simply put, while there is a benefit to using labels on occasion, categories lack nuance. We are conditioned to think in binaries, “You’re either this or that,” but there is so much lost if we always operate this way. Why not explore the reasons and merits of the various Christian traditions and glean from them all?

Why not explore the reasons and merits of the various Christian traditions and glean from them all?

I am in no way saying that all traditions and practices are equally valid. After all, I do have an evangelical Protestant bias. But what I desire is for us to think beyond our categories and consider the many ecclesial expressions that have come before us. Once people understand the breadth and depth of Church tradition, they will embrace elements non-normative to their own tradition. This is what I see happening at New Abbey. There are Catholics among us who appreciate an expository sermon and Evangelicals who appreciate the formalities of liturgy; there’s something for everyone. New Abbey has become a place where traditions intersect, forming a unique worship experience for all of us. Liturgy, in our context, has become a reconciliatory catalyst.

When we redeem liturgy, liturgy redeems us. It reorients what our worship and life is about: God. Liturgy is not a gimmick or something to add to a service, but a means to respond to the Creator of the universe. Our liturgy invites us to praise him, confess to him, receive him, and follow him — and this repetition helps us to develop habits essential for growth and discipleship. Interestingly, these habits focus primarily not on our actions, but on what God has done for us. For example, when we confess our sins together every Sunday morning, we are not doing so in the hope that God will forgive us, but because God already did. Liturgy is all about what God has done for us.

Liturgy is not a gimmick or something to add to a service, but a means to respond to the Creator of the universe.

Liturgy not only shapes our Sunday mornings but our entire year, and therefore, our entire life. At New Abbey, our worship experience is guided by the lectionary, with the Church calendar supplying the scripture and narrative for us to focus on. The spiritual sensitivities of most Christians increase during the Christmas and Easter seasons. But the Church calendar and lectionary focus on all of the Christ events, not just the birth and resurrection. The calendar and lectionary shape our reality, serving as a means to remember and experience Christ. The idea of having a year-round rhythm is not foreign or farfetched. Everyone has a yearly rhythm, for example, one shaped around the school year, three months of summer, and all the holidays in between. The Church calendar reorients our lives to a different rhythm, shaping them around Christ.

Many church planters feel the need to be innovative and original; but that’s not New Abbey. We’re not doing anything new. We’re unoriginal. These words and phrases are usually avoided when describing church plants. Not ours. I want to communicate that we are part of the historical church, using the forms that have been thought through and practiced for centuries. We echo the words of the saints who came before us. We aren’t pressured to be cutting edge; we do what has already been done.

It took a while to get to this point of appreciating and utilizing liturgy. My upbringing in a mixed family of Protestants and Catholics has shaped my relationship to liturgy. In one sense, I have come full circle. But I haven’t really. Appreciating liturgy is not about returning to the Catholic Church or turning your back on evangelicalism; it’s about reorienting your life around Christ’s life. And this new orientation does not have a denominational tag.

Appreciating liturgy is not about returning to the Catholic Church or turning your back on evangelicalism; it’s about reorienting your life around Christ’s life.

With this new perspective, I had the privilege of baptizing six people this past Easter. I did not baptize them out of Catholicism or into Protestantism — I baptized them in the name of Father, and of the Son, and of the Holy Spirit, as members of the Body of Christ — the one, holy catholic Church.

So what kind of church is New Abbey? In many ways, New Abbey cannot be described merely through words; it must be experienced. But here’s a shot: We are a people formed by the redemptive work of Christ, which we experience through the liturgy of the Church. 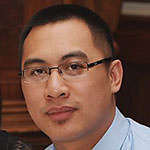 EJ Ravago is a husband, father, and church planter in the northern suburbs of Chicago. He is a graduate of North Park Theological Seminary. Other than theology and ministry, he enjoys fishing, working on his Jeep, and Brazilian jiu-jitsu. He hopes to one day live on a five-acre self-sufficient farm.