With Sin and Stones

I'M NARCISSISTIC. I tend to center my life on being attractive to others, because I want them to like me or at least see me in a positive light. That's my problem — I'm not looking for love; I'm looking for likes.

I met her through friends. Friends who vouched for me. Friends who thought we might be good together. And they were right, for the first three months. That's about as long as it takes any couple to start letting their guards down. It's also around the time I start to become anxious. If I want someone to like me, it doesn't make sense to show them how I really am — selfish, insecure, oftentimes lazy. To compensate for this, I tend to become more judgmental, focusing on her speck so that she doesn't see the plank jutting out of my eye. Ideally, I can justify a reason to break up with her before she catches on.

If I want someone to like me, it doesn't make sense to show them how I really am — selfish, insecure, oftentimes lazy.

Things would've gone the way they usually do if she hadn't decided to love me. I look back now and see that she had made up her heart to stick around in spite of my flaws. And I didn't want to lose the possibility of us. I was scared of voicing what I really wanted. What I really wanted wasn't her and I saw that as cruel — too cruel to tell her. I wanted something I could control and keep at manageable levels. So I started looking for what I was familiar with. I started looking for someone else.

It started innocently enough as these things tend to go. A text message here. An email there. She was a friend of a friend, and it was easy to convince myself that these interactions were innocuous. I was getting the attention and admiration I craved without the cost of responsibility. There was no harm in it, I thought. Maybe so, but it sure sets the stage.

The first step toward disaster is deceiving yourself into thinking that you aren't prone to temptation. The last step is when weakness meets opportunity. Up until the moment of impact, you can preserve the fantasy that whatever comes next will finally give you what you want.

The first step toward disaster is deceiving yourself into thinking that you aren't prone to temptation.

I woke up that morning in a haze. Light from an overcast sky crept in through a half-shuttered window casting everything in a dull gray. I studied the unfamiliar ceiling for a while until she shifted in her sleep.

This wasn't my room.

This wasn't my bed.

This wasn't my girlfriend.

The scene snapped into focus as I checked my phone. Missed calls from the girl I was dating. I turned off the screen and after a few breaths, I finally managed to ask myself: What have I done? What will I do?

In retrospect, I think I actually spent most of my early Christian life aligning myself with the Pharisees who were so disdained. And why wouldn't I? There is this prevailing culture, particularly in select Asian American churches, that focuses more on "looking good" than acknowledging that we are actually anything but "good". Additionally, a special honor is imparted to you if you teach Bible study or play on the worship team — I did both for a number of years.

There is this prevailing culture that focuses more on "looking good" than acknowledging that we are actually anything but "good".

After a while, I couldn't quite tell if I was serving in church, or merely filling a role to keep up my appearance. It became easy to believe this false elevated narrative about myself. The scary thing was that, eventually, I had gotten skilled enough to pay lip service. But God doesn't read lips when He can decipher hearts. And that was the problem. I had lost track of my heart, and on that hazy morning, the bottom fell out.

I prided myself on having a bottom. I knew I was a sinner, at least the church's version of one. Everyone sins, so it's easy enough to make light of that. But there are certain places, where even secular people might pull out the scarlet letter — and that's a serious thing. When you hurt more than just yourself, the consequences ring out further. When it's someone who trusts you, it can cause irreversible damage.

"I need to talk to you. I did something terrible. I don't know what to say." I never asked her for her forgiveness. I was terrified. I assumed I was dead to rights; forgiveness was not an option. I was still so entrenched in my own arrogance that I thought I could absolve myself of this guilt — I just had to feel guilty enough. I thought I could make this right by shaming and loathing myself, like an emotional ascetic. This went on for months until I couldn't bear it anymore. I had to talk to someone about this.

I never asked her for her forgiveness. I was terrified. I assumed I was dead to rights; forgiveness was not an option.

My friend, Steph, knew me the best at the time. This made telling her what I'd done nerve-wracking. I didn't want her to see me differently. I told her the whole account, expecting to be pelted with stones. But she just listened. She didn't scold me. She just sat in the pain with me. She just sat in the pain with me. I was taken aback. Now I get why Jesus laid down his life for his friends. That night was the catalyst for my going back to church. The sermons started sounding different, because of where I began to place myself in the story.

I used to read John 8 with stones in my hands. I'd think that I may have had sins, but at least I wasn't an adulterer. My experience shifted my alignment from the teachers of the law to the adulteress. I got cut down to size to see myself for what I was.

Not being forgiven by someone you cared for makes you understand how valuable forgiveness is. And you begin to become aware of where resentment lies in your own life. I started to understand how my dad felt.

The effect of unforgiveness can be seen in a person's face. It's this look of hopelessness. I had often seen this look on my dad's face — this look of not knowing how to make things right.

I resented him for what he did for so long, not the least of which was splitting up the family to pursue an "apparent calling" from God. I was angry for so long, it blinded me; I couldn't see that he had always been sorry for the choice he made.

Walking through that valley made me finally experience his pain. I would have to forgive my dad first before I could learn to accept it for myself. I'm still figuring it out, but it's a start that I never thought I'd be in the miserable position of empathizing with him.

I would have to forgive my dad first before I could learn to accept it for myself.

My heart broke that year. I felt pain where I never felt pain before — a dull dread, like someone informing you that nothing's going to be the same anymore. It felt a bit like moving from a familiar town to a city you've never been to. Like watching your old house burn down and learning that it was because the foundation was bad. I lost who I thought I was.

It's important to often go back to the times God finds you. It's easy to forget what it feels like, and you have to remind yourself that that kind of love exists. At my best, my life is about remembering. It's not about living in the past, but about trudging forward and remembering.

I am both my mistakes and good intentions. Deeper than either of those, I am what God has spoken into me. When my friend sat with me that day to share my pain, I felt it, a glimpse of that love I hadn't understood for so long. It felt like settling into a new home and tasted like black coffee at a Denny's. Slightly bitter, but light and lingering. 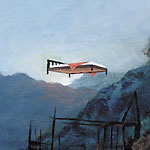 Josh B. is a recovering idealist raised on the mean streets of Diamond Bar, CA. He decided to switch places with Snoop Dogg and now finds his home, work, and leisure in Long Beach.