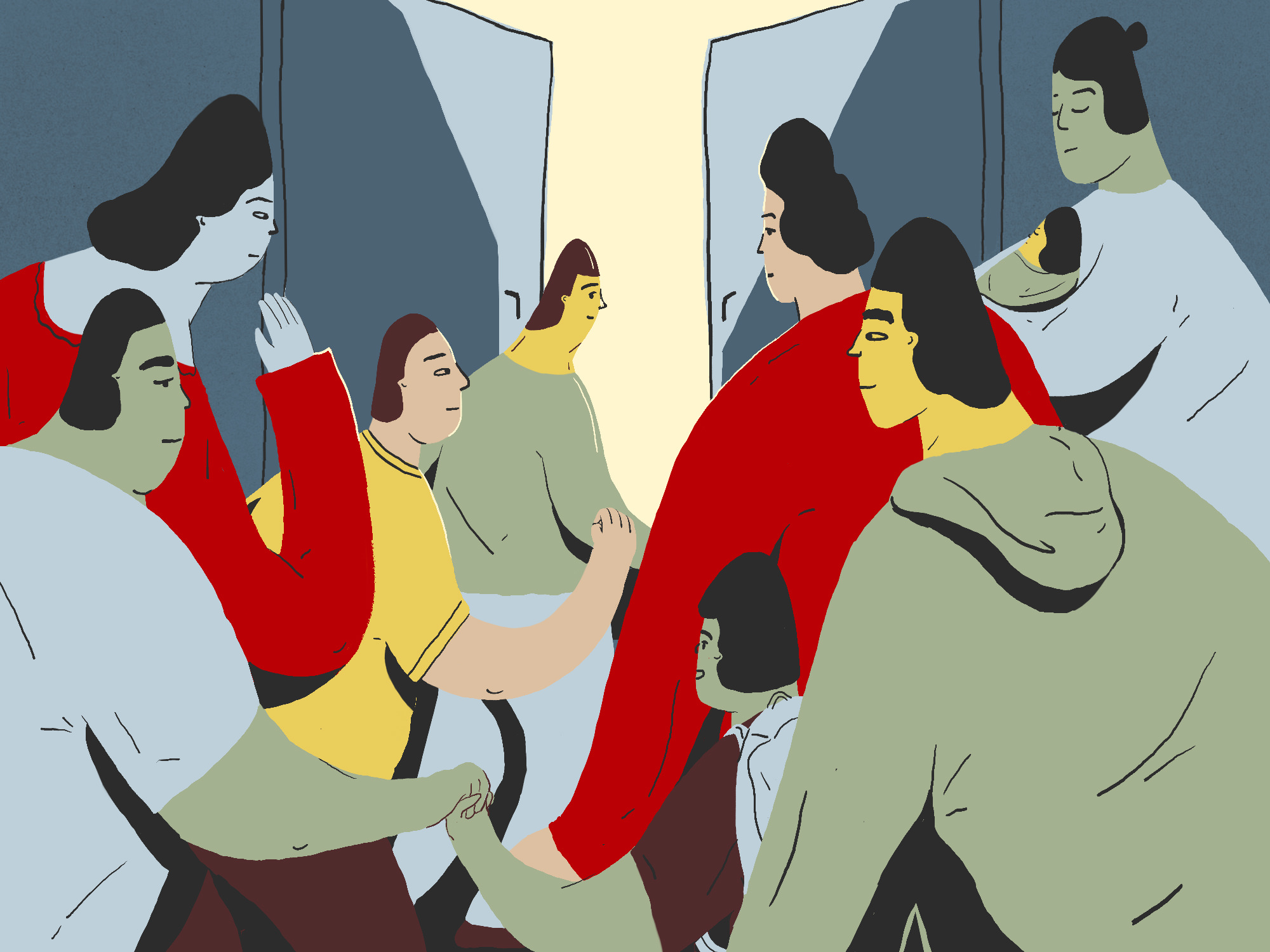 Tu Shan’s silent desperation began to take its toll. As housing costs in the San Francisco Bay Area skyrocketed, he feared that he and his wife would no longer be able to afford to live there. Already living in cramped quarters, they barely could afford to clothe and feed their three children. Five years after resettling here as a refugee from the Kachin State of Burma, he had a minimum wage job working at a restaurant.

Unfortunately, his resettlement classes didn’t train him for the high-tech economy of San Francisco. In fact, his limited schooling couldn’t even prepare him for a service sector job cleaning up after the high tech workers. Without English skills, he — like thousands of refugees like him — seemed destined to an unstable future.

Just four miles away at her workplace in San Francisco’s Bayview-Hunter’s Point neighborhood, Minnie Fong constantly questioned the meaning of work from a Christian perspective, often asking herself “Why am I here? What’s the impact of my work compared to doing direct ministry?” On a H1B visa, she came from the Philippines to get her MBA at UC Berkeley and has held different jobs since she’s graduated. Her current position, as vice president of new market operations for Imperfect Produce, neatly fits her skills in operations, but she works long hours and finds herself at an airport every two days.

"Why am I here? What’s the impact of my work compared to doing direct ministry?"

“I struggle a lot with the meaning of work,” Minnie intimated. Even though her start-up was expanding rapidly and she had the huge responsibility of establishing new markets, she still wondered why God had placed her at Imperfect Produce, which fights food waste by selling vegetables too ugly for grocery stores.

Although a successful telecommunications manager, David Sein-Lwin’s career was much too stressful. The high-pressure work literally killed a coworker, who passed away from colon cancer at an early age. That wakeup call led David to quit his job and take some time to figure out his family’s next steps.

David used his newfound freedom and time to serve at his church, Oakland Burmese Mission Baptist Church (OBMBC). When he was 13 years old, the government junta took control of his father’s business, and his Chinese-Karen family had no means of income. A church sponsored his family to migrate to Pennsylvania, and David couldn’t fathom why they were so generous: “We had nothing; the church provided everything. They didn’t even know us, so why would these people help us?” A grateful recipient of hospitality, he promised himself, “If I had the opportunity to help in a similar situation, I would do the same.” So when a new, larger influx of refugees from Burma began to resettle in the Bay Area, David was ready.

"We had nothing; the church provided everything."

Despite her busy schedule, Minnie took the time one night to cross the Bay Bridge and attend a training about refugees from the International Rescue Committee. She felt a deep empathy for refugees: “I don’t come close to what they go through, but I know what it’s like to live in a foreign country, not feel like you belong, and not have any support.” That night, when she heard about the needs of refugee families, she realized Imperfect Produce had jobs available that could provide a living wage.

"I know what it’s like to live in a foreign country, not feel like you belong, and not have any support."

Not only did Imperfect Produce pay more than minimum wage, but they offered benefits and free produce as well. Further, their workers didn’t need to know much English to pack boxes of produce. “It just made sense,” Minnie realized, to try hiring refugees to stabilize her work crews. “It’s a win-win for all parties.”

Later that month at OBMBC’s 10th anniversary dinner, David heard about the job openings at Imperfect Produce. Sharing the news with his congregation, he found widespread interest but also much fear and apprehension. Most of the men worked under the table in ethnic restaurants; leaving a steady job for a new one in a mainstream American corporation seemed too risky. Furthermore, being in an English-speaking environment seemed too daunting.

However, two bold applicants approached David, and he referred them to Imperfect Produce. Informed that they were coming, Minnie encouraged her human resources staff to offer them trial workdays. Even though the chill in the refrigerated warehouses was far from the humidity of Burma, the workers quickly completed their tasks. Imperfect Produce supervisors were ecstatic to get eager employees, and the Karen found the work easy and the pay substantial.

Once a few refugee workers got established at Imperfect Produce, Tu Shan wanted a job, too. Nervous, he approached David about applying. He assisted Tu Shan in filling out the online application, uploaded his permanent resident card and driver’s license identifications, and arranged a trial workday.

Tu Shan got the job, and has been at Imperfect Produce for a month now. He reports, “I’m very happy now that the income I get from this job helps pay for my child’s school expenses, and my rent payments.” Also, he gets so much free produce that the family rarely has to shop for groceries.

David continues to send refugee applicants from his church to the company. Being at the right place at the right time, he says, “It’s easy to get people; they just come to me and we talk about how they’re doing. If they need a job, I just gather their information, and Imperfect Produce is appreciative with the people we’re sending.” Currently, Karen refugees already make up one-third of Imperfect Produce’s operations staff after the first one was hired.

And Minnie is overjoyed that she’s been an answer to prayer of this community. “I can’t say how fulfilling it is when I hear about how happy they are, and what kind of impact this has for them. It’s not possible to live on minimum wage, and Imperfect Produce really values their workforce, so we make sure to pay a living wage.” Technology startups have gentrified the Bay Area, but some conscious enterprises such as Imperfect Produce have worked to ameliorate the negative impacts of capitalism.

Technology startups have gentrified the Bay Area, but some conscious enterprises such as Imperfect Produce have worked to ameliorate the negative impacts of capitalism.

Just as Imperfect Produce gathers ugly fruit and repackages it to create jobs and prevent food waste, God uses imperfect people — the church — to accomplish God’s perfect will as they steward their labor, time, and power.

In stewarding his labor, Tu Shan’s bravery and diligence now earns a decent income for his household. He’s proud to state, “I’m thankful to God for this new job. I worked in a restaurant before, but it required long hours and I didn’t get any benefits. I couldn’t go to church on Sunday because I had to work. Now, I can go to church on Sunday and I get to spend more time with my family.”

By making wise use of his time and faithfully serving, David Sein-Lwin has assisted dozens of refugee families in his community. “In terms of stewardship,” he maintains, “we have the responsibility to manage what God’s given us to do. In this particular situation, we are tasked to present this opportunity to people in need. I’m just an instrument of God to get people into jobs.”

Through the gift of her career position, Minnie Fong’s desire to make an impact for God has borne tangible fruit. Even as she constantly questions if she’s using the gifts she’s been given well, she recognizes, “God has gone before me and he has plans for me before I knew it. He placed me in this country. My work here is a blessing that I need to use wisely and to steward.”

Indeed, Asian Americans have much to steward — the blessings and hardships of migration and resettlement, the gifts and anxieties of family and work, and the high calling to be the church. In the United States, growing up involves becoming autonomous, but in Asia, maturity entails taking responsibility for others. As these three Asian Americans have been responsible with what they have given, God has interconnected them in amazing ways to bear fruits for the Kingdom.

RUSSELL JEUNG is the author of “At Home in Exile: Finding Jesus Among My Ancestors and Refugee Neighbors” (Zondervan 2016), in which he recounts his family’s six generations in California, how they reflect the racialized history of Asians in the U.S., and how he has come to terms with his own Asian American Christian identity.