A Different Way Than Out

I came out to my family at the age of 27. I did it over dinner, at a Greek restaurant by the Civic Center BART station in downtown San Francisco. I had told my sister over text a couple weeks earlier, but still, I ate nothing that night. There was this icy dread of inevitability, like a slow curtain fall. It was the same dread I had with piano recitals as a child: watching the person before me perform center stage, everything building up to one final note that hung in the air before slowly dissipating into silence — a silence I always prayed would stretch out and last forever — and then all eyes were on me.

Unlike a piano recital, however, my coming out was unpracticed and clumsy, not to mention brief. I spoke two sentences, separated by a semicolon and directed entirely at my untouched gyro. I said that I was dating someone; I was dating a boy.

And then silence. That pregnant, waiting silence. As if we all needed to make sure it was really there before being able to break it. There’s this image of my father, slack-jawed and looking at me but also almost through me — the most honest look of shock I have ever seen on him — that lives in my mind from that evening. It held no judgment or shame, but it, too, seemed consumed by silence, something I didn’t know expressions could be. It passed, though, in an instant. My family is nothing if not loving and fast on their feet, and the conversation quickly found its tracks again. There were quick gasps followed by creeping smiles. Someone made a joke and we all laughed. As we left the restaurant, we walked down the street as we typically do, in twos and threes, and my mother told me she loved me and was proud of me. Then she held me in a side hug and rested her head on my shoulder.

I let out a long breath and felt famished. It’s over, I thought, which, of course, isn’t how it works at all.

A couple months later, my father asked me, “So what does it feel like, being out?” We had gotten better at talking about these things, but it was still early, and I could tell he was nervous, cautious with his words.

“Easier than being gay,” I joked. He relaxed a bit and laughed in that wheezing, easy way of his. We often communicate like this, my family, using humor’s 10-foot pole to poke at the wounded bear of our feelings.

He asked me what I meant, and I didn’t know what to say. I only knew how I felt. Since coming out to them, my emotions had become unruly and volatile, an unfamiliar teenager living inside of my young adult mind. I didn’t know how to describe so subtle a distinction.

I couldn’t see it at the time, but I clung to “out”. It was a safe word with rounded edges, a harmless substitute for “gay”. The distance of metaphor shielded me from scrutiny — by both myself and others — and allowed me to skip over the darker parts of myself that I still couldn’t bear to look at. Like getting lost beneath a large and heavy blanket, the reassurance of “out” was a loving, lulling smothering, but ultimately no more than a distraction. In a single word, I proclaimed openness while side-stepping the very thing I was claiming to be open about. I embraced truth while ignoring a childhood of implicit lies. I lauded my own bravery while still only ever implying my own gayness. No wonder that one evening felt so blissfully brief — I had managed to celebrate myself without ever really revealing myself.

My father asked me what I meant, and I don’t even remember what I said. It was a non-answer, a bit of dressed-up nothingness that deftly changed the subject — something else our family does well — because I didn’t have the words that said I’d never been happier while also so completely ashamed of myself at the same time.

I told my therapist I was gay almost six months after coming out to my family. We had been meeting for several months at that point, so he already knew everything about me and Dante, my boyfriend. I had told him every little detail of discovery, every single surprise I had come across from dating a boy for the very first time. I described to him everything from the tickling shock of kissing someone with a beard to how there was something so peaceful about resting my head on a chest as broad as my own. And yet, whenever I approached that one word, my voice would vanish and I’d find myself at the lip of a cliff, unable to go on.

“Would you say that you’re gay?” he asked me, finally, one afternoon.

“Yeah what?” he asked. Thinking back, so much of therapy was just this, just patience.

“Yeah,” I said again. I tore my eyes away from the one fraying spot in the woven carpet I always settled on and met his gaze. I felt the words lodged just beneath my vocal cords. There was that silence again. That piano recital silence. And then: “I’m gay.”

Light streaming in between the blinds showed bits of dust dancing in the air, through which I saw a smile stretch across my therapist’s face. Something shifted inside of me, an almost imperceptible change, like the subtle settling of a house.

Maybe my problem with “coming out” is just how utterly incapable it is of capturing experiences like this. It can’t explain that lingering sense of risk that comes with telling someone something they already know, or the power a three-letter word retains even after it’s been spelled out across hours and months, across years. The metaphor of movement, of progression across a duality — “in” and “out”, “right” and “wrong”, “good” and “bad” — is coldly dismissive in its definitiveness. It leaves no room for truth found in pieces, for fragments of ourselves we pick up, drop, and pick up again, sparing no patience for the asynchrony of late-bloomers and the self-doubting.

Or maybe it is because “coming out” ignores the moments when the silence wins, the phrase silencing in its very omission of silence. After that day with my therapist, I came out to an old college friend and his girlfriend who were visiting from out of town. We sat across from each other at a Vietnamese restaurant and reminisced about old college hijinks while we ate. We spoke loudly and freely, quickly finding our rhythm again. College friends are like family in that way, held frozen in time despite however many years that pass. Then, just as we were finishing, I told him, and he rebuked me immediately using scripture and a stern, quiet voice. When he excused himself to the restroom, I didn’t know what else to do except look at his girlfriend, who during the entire time wouldn’t take her eyes off her empty bowl of pho.

I left that evening trembling and without so much as a goodbye. My voice wouldn’t leave my throat until I was on the train, speeding back home. I’ve been fortunate not to have too many painful memories, but this one still stings every time I reach for it. At the time, though, what I felt most was confusion. Because I was out, and being out didn’t explain how, for a moment, or perhaps longer, my friend had convinced me he was right. Being out didn’t explain that I was an argument, a fight with two sides, where I was to both be the problem and provide the solution. I was lost, unsure, yet somehow undoubtedly wrong. Being out had me believe that I was out of the closet, while, in fact, I had simply found myself inside of a larger one.

In truth, my grievance with “coming out” is not with the metaphor itself. It is with language as a whole — the soullessness of its vehicle, its concreteness, its singular instinct to unravel a knot into a linear string of vowels and consonants. Language has disappointed me in its inability to capture my sexuality in every one of its stages, in all of its obscurity and uncertainty. I realize it now, but I needed language to resemble how I felt and not necessarily just define it, and, likewise, I needed the words of coming out to be more than a sentence or declaration, more than a single idea captured in a discrete time and place. Because that’s what happens when we don’t give something a proper name — silence names it for us with the only name it knows: a secret.

What I wish coming out would resemble most is a story, a medium that blooms in the mind and breathes a life of its own, capable yet gentle enough to embrace queerness without crushing it. Perhaps my coming out would resemble a story much like this one — a collection of memories with torn edges, of moments as brief as thoughts yet stretched out into paragraphs. At its core, mine would be a story of boys. All the boys. Every one I saw and noticed. The boys whose smiles stood like trellises for my imagination to cling to and grow along. Everyone from Carlin to Dante, my love, and all the boys in between. Louis, Max, Matteo, Alex, Elijah, Josiah, Michael, Sam. The entirety of the high school varsity baseball team on game days, the only days I would sit in the back of class so I could watch them roughhouse in their uniforms while pretending to look out the window. And the one boy with the beautiful eyes, who I never met but stared at every lunch period as he practiced longboard tricks by the tennis courts. Mine is a story of boys seen from the shadows — named and unnamed boys — each one a drop in a well, filling it and bringing me up from the bottom, lifting me up, closer and closer to a world of light and sound. 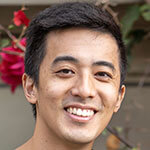 Daniel Lam (he/him/his) is a physician, writer, and knitter from San Francisco. As a Chinese American, he took piano lessons for 12 consecutive years and cooks rice with the knuckle method. As a gay man, he was surprised at just how tall Eureka O'Hara is in person. He currently lives in Colorado with his partner, Dante, and their dog, Sylvia. See his work (knitted and otherwise) at www.masculiknity.com.