A Working Definition for Family

Part of 4 of in
By Erin Crocker
Illustrations by Terry Yang
May 01, 2017 | min read
Part of 55: This Adopted Life
37 Snaps
37 0 Snaps
Oops! Something went wrong while submitting the form.

A story untold: Umma and Appa

I’m sure it was a hot and humid day in Seoul, South Korea. Being seven months pregnant just added to her discomfort. She was 26 and traveling on a bumpy street through the city. The jarring became too much and the baby girl inside decided it was time to make an appearance.

The young mother was rushed to Sowha Children’s Hospital and gave birth to a 4-pound, 2-ounce Sanghee with a hole in the heart. The doctor said there would be cardiovascular complications in the future, and the lives of the two young, unwed parents suddenly became more complicated than just a premature baby.

They had aborted the first baby due to unpreparedness. This time was supposed to be the beginning of the hoped-for family. They didn’t have a lot of money with her high school education and his small business in the early 90s. It would be nearly impossible to afford the medical bills that may come in the future, and international adoption was normalizing in South Korea since the armistice of the Korean War. Holt International, an adoption agency based out of Eugene, Oregon, was formed after an American couple adopted eight children from South Korea in 1955. After this experience, the adoption agency grew due to God’s leading of a white American couple to bring more Korean orphans to America. The U.S. would be the most optimal place for this newborn, thought the mother.

The U.S. would be the most optimal place for this newborn, thought the mother.

On July 6, 1994, at 11:11 a.m., the mother and 32-year-old father walked away empty-handed. Sanghee went to a foster home in Hapjeong to a middle-aged woman with two older sons. Six months later, Sanghee flew out to Memphis International Airport and away from a homeland she barely got to know.

My dad has been a Southern Baptist pastor for more than 30 years; he grew up in a small farming town in West Tennessee. He’s never lived outside of the region and would probably never leave it. He grew up on a farm and had to work incredibly hard for everything. My mother grew up in the suburbs of Memphis and now works for the state to aid those who need to apply for disability due to health issues. Both attended a local, small Southern Baptist university. He was the evangelistic preacher, and she played the piano for worship. They got married in their early 20s, and he went on to becoming a preacher in the small town I would call “home” one day.

According to my mother, they felt called to adopt when they heard about a domestic adoption case in the area. My brother, who’s three years older, was adopted from a nearby town. With blond hair and blue eyes, he flowed right into the mold. Then I was adopted, and five years later, they adopted a 3-year-old boy from the foster care system in Hong Kong.

No one could understand my brother since he only spoke Cantonese. It was always hard for people to understand his heavy accent once he started speaking English, and it seemed as if the people in my town lost patience learning and understanding him before they even tried.

He and I grew up fighting a lot since we were so close in age, but we were also a lot closer since we have the commonality of being the only Asians in our town. We’d pretend not to notice the stares or hear the whispering when we entered Chinese restaurants. I remember how we would play house: We would make up a gibberish language since we both knew that we should be speaking an Asian language, and we would pretend to know what we said. It was something we just did.

We would make up a gibberish language since we both knew that we should be speaking an Asian language, and we would pretend to know what we said.

A couple of years ago, I wore my first hanbok to participate in the Buchaechum (Korean fan dance) at the local Korean church’s Chuseok (harvest celebration). I felt stupid not knowing how to tie the ribbon but couldn’t quit staring at my reflection once I was done. The cream jacket and crimson skirt with embroidered flowers at the bottom seemed foreign and too elegant for someone who didn’t deserve to wear it.

I never feel as though I “deserve” to call myself Korean, because I’ve had to learn what it means through unconventional circumstances. I have been interviewed, used as research, and have spoken at adoptive family support groups. I’ve had to learn what it means to be Asian American in a community that only focuses on Black and white relations. I’ve been a token Asian at a predominantly white Christian institution for four years. But my knowledge of Korean culture comes from Google, or Koreans who would never see me as one of them.

My knowledge of Korean culture comes from Google, or Koreans who would never see me as one of them.

When I saw what a Korean family looked like one summer while visiting my Korean friend’s family, I started to have a desire to meet my Umma. I started the search for my biological family a year ago. It’s taken some time to start the process, but the paperwork was eventually sent in January 2016.

Umma, would you be proud of me? I wrote a letter for her so that when we’d meet, I’d be able to say what I wanted to her face without any complication:

Every day when I see the sun set, I think about whether you’re seeing the same sun. 22 years later, I still do not hate you because I have grown up happy and healthy. If you were to see me now, I would hope you could brag about me. I hope I get to meet you soon.

To my mother whom I love,
Sanghee

If you were to see me now, I would hope you could brag about me. I hope I get to meet you soon.

It took about six to seven months to hear anything back from Holt. Nine days after my 22nd birthday, I Skyped with my case worker and found out that my biological mother had passed away 10 years ago. She died of kidney failure on August 11, 2006. I wondered if her financial status restricted her from receiving dialysis or a transplant. Her younger sister had been searching for me since 2007, but my father didn’t want anything to do with me.

It was a blow to everything I had hoped for in the past few years. I had started learning Hangul, perfecting recipes for kimchi bokkeumbap and pajeon, and preparing myself to go live in Korea as a teacher of English as a Second Language for the sake of my Korean family. I recognize it was incredibly naïve and ambitious.

It felt as if I had to say goodbye to someone I had never been given the chance to say hello. I told my adoptive mother and she didn’t know how to respond. I didn’t and don’t know how to grieve for someone I’ve never met but feel so connected to every time I look in the mirror. I begged God for some kind of answer on how He could do such a thing. I asked God why He would give such hope to a cynic just to have it be torn down so quickly.

I didn’t and don’t know how to grieve for someone I’ve never met but feel so connected to every time I look in the mirror.

This is where I am these days. It’s been over six months since I heard about Umma’s death. I know God is sovereign and has known me since before I was in Umma’s womb, but it’s hard to find any hope in such grief at times. I’ve started the process of finding my aunt through an official search through the Korean government. I’m not quite sure where this will lead me or what the future holds for my adoption story.

My relationship with my adoptive family changes more and more, and it’s scary. It’s scary to have less and less in common with the only family you’ve ever known. If you don’t have biology and culture in common with someone, what is there? Because whether it’s in the reflection on my laptop screen or a conversation I hear about genes, I’m triggered into a whirlwind of uncontrolled grief.

It’s scary to have less and less in common with the only family you’ve ever known.

“Erin, do you want to be part of this family anymore?”

Mom looks at me with deeply troubled and weary eyes. Her worried, bare face reveals wrinkles that dare me to say the wrong words, to validate the fears held back all these years. She’s always been a woman who tried to keep things lighthearted.

Not now. Not when I come home or when it’s just us in a room for more than five minutes these days.

Silence. Just quiet hums of home in the background as I weigh the aftermath of my unspoken answer.

The pause is longer than she anticipated, and I can almost feel the disappointment expanding in this small space between us. What kind of question is that? It seems ridiculous for her to ask me this at the kitchen table, but my hesitant “Of course” leaves a taste of deception on the tongue and a heavier heart. Upon hearing my worn and tolerable lie, Mom forces out a smile as she gets up with a pat on my shoulder. Band-Aid back on.

And I am sure of this, that he who began a good work in you will bring it to completion at the day of Jesus Christ. – Philippians 1:6 ESV 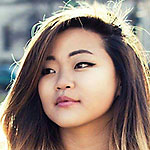 Erin Crocker is a Korean American adoptee who plans to go to grad school for social work to be a liaison in international adoption agencies. Most of her time is spent taking random road trips for the sake of food or coffee; otherwise, she is figuring out the paradox of transracial international adoption through a realistic Christian lens.

Terry Yang was born in 1992 in Los Angeles, and earned her BFA in illustration from the Art Center College of Design. Terry Yang’s paintings feature hidden figures displayed in observational journalism of household diaries and outdoor expected behaviors, ruling to serve a break in the border of rejection and disbelief.