When my wife and I began dating, one thing I learned was that God had placed in her a desire to adopt. As a teen, Dorene was a fan of “Anne of Green Gables”, a story about an adoptee who grows to become an intelligent, strong, and resilient woman and teacher in her small town. The vision stuck with Dorene.

For whatever reason, I was neither hesitant nor resistant to this idea of adoption. I’ve never been one to plan out my future, so the idea of adoption didn’t challenge any preconceived notions of how we might add to our family, nor did it alter how I thought I would become a father. Maybe this was the way that God had prepared my heart.

After getting married, we never forgot the conviction that God gave my wife in her youth, but we also wanted to try having a biological child of our own first. This just seemed like the thing to do. But when we discovered that Dorene suffered from ovarian cystic syndrome and would not be able to conceive without aid of infertility treatment, we began to pursue adoption.

Looking back, we are deeply grateful that adoption had been planted in our hearts as an attractive option and not a disappointing alternate means to becoming parents. We did mourn our inability to conceive, but it also seemed God had prepared us well in advance to view adoption as something beautiful and good.

We are deeply grateful that adoption had been planted in our hearts as an attractive option and not a disappointing alternate means to becoming parents.

At the outset, Dorene and I explored our options — from foster care to private adoption, to the various Christian agencies that were recommended by friends. For international adoption, each country has its own requirements. Some countries deemed us too young while others found us too old. Korea ended up being the best fit.

Through it all, we couldn’t help but feel that the whole adoption process seemed so unjust. We were willing, able, and hopefully suitable parents-to-be — eager to welcome a baby into our lives, and yet having to endure stacks of paperwork, multiple meetings, and a good amount of savings for the opportunity to be parents. We felt that it was unfair that there were so many people in the world that don’t want children, but could easily have them without any of the scrutiny or preparation we had to go though just to prove ourselves to be fit parents.

Nevertheless, Dorene and I spent the next year completing our dossier, home studies, and of course, praying for the child who would someday be ours.

Finally, we were matched with a newborn in Korea — a boy.

We were sent two baby pictures, his medical records, and a huge decision to make. But when you have prayed for nearly two years, when the phone call finally comes, the answer is “yes”. If anything, adoption is a tangible reminder that God is already doing something long before we ever arrive.

Adoption is a tangible reminder that God is already doing something long before we ever arrive.

So we flew to Korea to pick up a 5 1/2-month-old little boy we had never met. In his pictures, he was a dark, skinny kid, with a good amount of hair. When we arrived at the orphanage, we were handed a chubby guy with a pale complexion dressed in pink. I thought, is this the same kid? But the eyes were unmistakable. And this is how Jarron became our son.

Though bonding is sometimes an issue for some adoptive parents, from the moment I held Jarron and Charis in my arms there was never a minute that I did not feel like their dad. Most days, unless it is brought up in conversation or the situation presents itself, I totally forget they are adopted. They are just our son and daughter.

I became a Christian during a time in which adoption was less common. From my limited vantage point, it seemed that most evangelicals viewed adoption much like they thought of overseas missions: holy work, but always for someone else. Based on that, I got the sense that adoption was a secondary and less desirable choice, a last resort only when you couldn’t conceive children of your own.

I got the sense that adoption was a secondary and less desirable choice, a last resort only when you couldn’t conceive children of your own.

On one hand, the scriptures speak of a God who blesses human beings and tells them to “Be fruitful and multiply” (Gen. 1:28). But this same God also reveals through Christ that, “No one can enter the kingdom of God without being born of the Spirit” (John 3:5). Expanding further, the Apostle Paul goes so far as to say, “For you did not receive a spirit of slavery to fall back into fear, but you have received a spirit of adoption. When we cry, ‘Abba! Father!’” (Rom. 8:15)

It seems the whole of the gospel supports, at least spiritually speaking, that adoption is not God’s second option, but his first. What is necessary once we are physically born into this world is to be born a second time as a child of God. God relativizes our biological birth and elevates the significance of our spiritual birth so that the second is the fulfillment of the first.

In that sense, as followers of Christ, we are all adopted.

Love is Thicker Than Blood

There is a common assumption for new parents: you will automatically love your child. I know it can certainly feel that way. Especially for mothers who develop such an intimate connection with their child during pregnancy, the joy and relief must be enormous seeing your child face-to-face. Who doesn’t think a little infant is the most magical thing on earth?

But all that cuteness in the early weeks eventually gives way to the jarring reality of parenting. And what is true of adoptive parents becomes true for all parents — we must choose to love our children. It is the one necessary choice required of all parents.

And what is true of adoptive parents becomes true for all parents — we must choose to love our children.

I once heard an adoption advocate say that love is thicker than blood. And they were right. We don’t love our children simply because we share the same DNA. We love them because they are persons deserving of our greatest affection and fiercest attention. In short, parenting is the astronomical responsibility and privilege to disciple. We bring a stranger into our home and God says, “Love, train, nurture. And I will be with you.” Whether that stranger comes from your body or from an orphanage is beside the point.

To love a stranger by bringing them into your family lies at the heart of what hospitality is. So while it is true that parenting is the discipleship of children, it is also true that God uses our children to disciple us. God uses children to teach us what it means to lay down our lives and to make room in our lives for another. Because parenting requires investment of time, energy, and love 24/7, it is the most intense form of incarnational ministry. That’s why parents ought to be the most hospitable people on the planet. As any parent of a teenager knows, we understand what it’s like to live with what at times seems like a stranger in our own homes. This is the ministry we offer not only to our own kids, but also to the world.

While it is true that parenting is the discipleship of children, it is also true that God uses our children to disciple us. God uses children to teach us what it means to lay down our lives and to make room in our lives for another.

This is the reality that adoptive parents know from day one. From a parenting perspective, chromosomes are mostly irrelevant. They do not automatically make us better or worse parents. We know this is true. All of us are familiar with stories of biological parents who neglect and do all manner of harm to their children. It seems unthinkable to us, but blood is not a guarantor of love; we must choose to love.

Which leads us back to Jesus. Responding to a request from his biological family who come looking for Him, Jesus replied, “Who are my mother and my brothers?” And looking at those around Him, He said, “Whoever does the will of God is my brother and sister and mother” (Mark 3:33-35). Astonishingly, Jesus says we are all his siblings if we do the will of his Father. In the kingdom of adoption, love is thicker than blood.

Adoption is the Gift of Community

When Dorene and I got married, I was fortunate enough to be serving as one of the pastors of a congregation that consisted of several adoptive families, including a good number of the staff who themselves were either adoptive parents or adopted children.

We were privy to adoption stories and experiences of so many in this church. In several cases, we were blessed to see the joys and challenges, the uncertainties, and wonders of adoption up close. Because of this, adoption seemed more normal than noble.

Since those early days, Dorene and I have tried to return the favor. My platform and visibility as a pastor has given us the distinct honor of sitting down with many couples who were contemplating adoption. Years later when we were given the opportunity to plant our own church, we enjoyed seeing many couples become adoptive parents. It has been truly one of the great joys of ministry.

Jarron and Charis are now 19 and 17 years old, respectively. And Dorene and I are blessed with joy beyond measure to have seen these two grow up before our eyes. And it is their adoption, maybe more than anything, that reminds me that children are not ours to own, but lives gifted to us by God with the unfathomable task to love, nurture, and disciple for a time. This is the great privilege of parenting.

Children are not ours to own, but lives gifted to us by God with the unfathomable task to love, nurture, and disciple for a time. 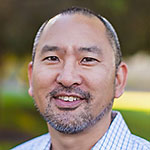 Kevin Doi is a third generation Japanese American and native Angeleno. He is founding pastor of Epic Church and co-founder of JOYA Scholars, both in Fullerton, CA. Kevin is an adjunct professor in the Asian American Center at Fuller Seminary teaching doctoral level courses in contextual theology and ministry.