Part of 7 of in
by Joyce Hiendarto
ILLUSTRATIONS BY Ellen P. Lea
Dec 01, 2015 | min read
Part of 38: The Next Step
0 Snaps
0 0 Snaps
Oops! Something went wrong while submitting the form.

Being so different that she could fit in anywhere and nowhere allowed Joyce to be able to be the go-between as a bridge builder.

GROWING UP IN INDONESIA as an ethnic Chinese girl, I was often told to “go back to your country” by strangers on the street. For years, I was often reminded that I was a minority in the country I called home. I was told to leave the classroom because I was different; I was taunted for my faith; I was aware of potential threats of being kidnapped and raped because of my double minority status.

I grew up in Java, one of the most populous islands in the world, where more than 90 percent of the population is Muslim. While I was aware of all the jobs I would never be offered — government, politics, law — I chose to focus on the options that were open for me.

I grew up in Java, one of the most populous islands in the world, where more than 90 percent of the population is Muslim.

The year I was set to go off to college happened to be during the May 1998 Indonesian Riots. The long embedded tension toward ethnic Chinese had boiled over, and incidents of violence were breaking out in parts of Indonesia.Ethnic Chinese were being targeted over layered and deep-rooted historical baggage; a prominent reason was a general assumption that the Chinese — most of whom were not Muslim — were controlling the economy.

My parents quickly changed their minds and wouldn’t let me attend the university on the other side of the island where I had planned to study engineering. Through God’s grace and divine intervention, I was given the opportunity to continue my studies abroad in the United States. So, at age 17, I left my bustling city of 2 million people and relocated to a little town next to an Amish county in northern Indiana.

I found a sense of belonging in America that I didn’t experience in Indonesia. My dad was a Mennonite pastor, so I was influenced by Mennonite convictions in my Christian journey. Because of my faith, I often felt out of place. But here I was in Indiana, attending a Mennonite college, and, for the first time in my life, I was not the minority.

But other factors kept me firmly in the minority. It wasn’t just the way I looked, but also the way I talked.

My distinct accent was an instant way to recognize I was not from the area, which quickly became a source of insecurity. For a while, I tried my hardest to change myself to “belong” to this new environment. I would practice my accent in front of the mirror in attempts to develop an “American accent”. I changed the way I dressed in hopes I could fit in with the Midwestern culture. I would even avoid speaking Bahasa in public so I wouldn’t be associated with “the visiting foreigners”.

My distinct accent was an instant way to recognize I was not from the area, which quickly became a source of insecurity.

I couldn’t shake the fact that I didn’t belong. I was continually questioning myself — Who am I? Where am I from? Where do I belong?

I was continually questioning myself — Who am I? Where am I from? Where do I belong?

In college, I longed to find the reason God created me and placed me in all these situations where I was the outsider. I wanted to find my calling so I would finally fully “belong” and that meant looking for the “right job”.

I came to the States wanting to be a journalist — a profession that would be nearly impossible to pursue if I were in Indonesia at the time. My dad suggested that I study psychology, since the skill of pastoral counseling would be useful. I chose to double major in communications and psychology, added a minor in information systems, was exposed to the art and design realm, decided to switch to multimedia production, and wound up dropping and adding a few majors and minors before finally making a decision.

During this time, I was also working in most of the school departments as a student worker. I worked in the living hall, admission office, dining services, library, print shop, and post office.

During my quest to find my “one true calling”, I was assigned Parker Palmer’s book, “Let Your Life Speak”, as mandatory reading for one of my classes. This book significantly reshaped my idea of calling and vocation.

I was struck by a particular quote from Palmer’s book: “Our deepest calling is to grow into our own authentic self-hood ... As we do so, we will not only find the joy that every human being seeks — we will also find our path of authentic service in the world.”

Understanding authentic self-hood has caused me to reflect on the way I had viewed my cultural and faith identity. I realized that “belonging” does not necessarily refer to being tied to one particular place or one specific cultural experience.

“Belonging” does not necessarily refer to being tied to one particular place or one specific cultural experience.

I would find belonging when I embraced who God created me to be and the experiences He wove throughout the years of my life. I had to let go of my fear of “not belonging” to discover where God had called me to belong: I belonged to Him. The realization that my calling was not solely dependent on my vocation freed me.

I began to examine who God had called me to be and where He had placed me rather than what He called me to do. Through reflection, I realized that God had woven a unique cultural identity and experience into my life. I was equipped and enabled in a special way.

I began to learn to embrace this strange dualism of belonging “nowhere” and “everywhere” as a strength. During graduate school, I realized my cultural nimbleness and adaptability allowed me to be a facilitator of conversations. Most of my friends in graduate school had vast differences — different cultures, different fields of studies, different places in life. My experiences of not being tied to one particular place and culture allowed me to engage all types of friends, hear of their experiences, and help them bridge their dreams and skills.

I realized my cultural nimbleness and adaptability allowed me to be a facilitator of conversations.

I am a bridge builder, a facilitator of cross-cultural communication.

Discerning vocation and my place in the world required me to embrace who I am: a Chinese Indonesian woman living the U.S. who has no permanent home and speaks with an accent — no matter where I go.

One of the ways I learned to grow into my authentic self-hood and embrace my belonging to God was to let go and follow God’s leading and use the skills He equipped me with. In the past 10 years, I found myself in several jobs I loved because they were only a vehicle for who God made me to be. If I had held on to my identity of “not belonging”, I never would have flourished working as a higher education administrator. If I didn’t recognize the role of self-authenticity in understanding calling, I wouldn’t be able to take part in mobilizing the student generation in North America to give their whole lives to Jesus and to find their place in His global mission.

In every phase of my life, I have experienced some insecurity. I know I will never fully belong to just one culture, nationality, or group. But celebrating how God has made me differently, even though it often caused me to feel like I don’t belong anywhere, can also be a beautiful thing, because I belong to Him everywhere I go! It is an unending journey to embrace and acknowledge this.

Celebrating how God has made me differently, even though it often caused me to feel like I don’t belong anywhere, is a beautiful thing.

As Henri Nouwen articulated: “God has a very special role for you to fulfill. God wants you to stay close to His heart and to let Him guide you. You will know what you are called to do when you have to know it.” 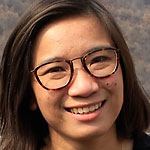 Joyce Hiendarto calls many places home — the newest is Madison, Wisconsin, where she serves as the Urbana Communications Director for InterVarsity Christian Fellowship, USA. She loves to travel, is always eager to find culinary delights, and discovers beauty and stories in various cultures around the globe. Keep up with her on Instagram @joycevh.