Bare and Busting a Move

THERE HE IS ... wiggling his little body, pumping his arms, and humming a tune to a rhythm only he knows. My little 3-year-old, John-Parker — we call him JP for short — loves to dance. And his jubilance is on its greatest display in his now traditional, post-bath, naked dance.

After lifting him from the tub, I try my best to contain him, wrapping him from head to toe with his plush monkey towel. Yet, despite the raw chill of the cool winter air, he always wrestles his soaking body free from my grasp — discarding the towel in the process — as he quickly pitter-patters his way over to our large closet mirror, where he plants himself in the buff and performs his dance.

And dance he does. The joy, the freedom, the unabashed self-expression. It is a sight to see.

The joy, the freedom, the unabashed self-expression. It is a sight to see.

There's a compelling reverie that characterizes his dance. It's a delight I honestly wish I had more of in my own life. He's just strutting about, bouncing to and fro, looking at himself, and loving it. He is completely confident that everyone accepts him just the way he is. He's dancing around, flashing his full monty with no sense of shame or self-consciousness whatsoever. In fact, if we let him, he'd have no qualms about dancing naked in public — as he so expertly demonstrated last month at San Onofre State Beach. He completely delights in all 36.4 pounds of his pudgy little body and expects the world to do the same.

I'm sure a big part of this confidence comes from simply being 3 years old. He's still in a state of innocence — sadly, it will only last so long. But I believe that much of it comes from feeling a strong sense of acceptance in the environment around him. He's had to test some of this to figure out what the boundaries are — indeed, he has a penchant for mischief — but around his family he knows he's deeply loved and accepted.

Around his family he knows he’s deeply loved and accepted.

For me, experiencing acceptance has not come easily. It's been a journey to figure out how to feel acceptance for myself and express it toward others, especially my own family. Growing up, I struggled to figure out who I was and how I fit in the world. Much of this is typical of any kid growing up, and Asian Americans are no exception. We are regularly subject to limiting Asian stereotypes that pervade American society.

While things are improving in today's world, things were different back when I was a boy — Asian Americans were typically left out of mainstream consciousness as inconsequential or rendered invisible. So I didn't feel a strong sense of outside acceptance. But what was even more challenging for me was the lack of acceptance I experienced inside my own home.

My parents were hardworking people who did a great job of providing for our family. But they also played out the common narrative of the demanding, critical Asian parents. They drove me to narrowly define my worth through the lens of ostensible success or failure. And yes, for my parents, an A- was an Asian F. Straight A's were considered par for the course — anything less and I was subjected to the lash of a sharp, condemning tongue. Finishing in the top 3 percent of my class meant 2 percent of the other people finished higher. "If only you could be smarter or more hardworking!"

So later in life, when I became a Christian as an adult, the concepts of unconditional love and acceptance were only a fairy tale to me. Logically, they made sense. The Scriptures tell me, because of Jesus, I am made acceptable before God (Romans 5:1), and that God delights in His people (Psalm 149:4).

When I became a Christian as an adult, the concepts of unconditional love and acceptance were only a fairy tale to me.

But living in the reality of God's acceptance was far beyond me. It has taken a serious process of rewriting the code of how I see the world, and how I see myself; it is a constant relearning that slowly but surely seems to be working.

God has faithfully worked in me through His love and grace to refashion a new man. Because of Him, I am a much different father now than I would have been. In raising my children, I still hear the echoes of my parents' harsh words. Their critiques seek to find their way out through my lips when I talk to my boys, but they don't come close. They are only a distant memory, a marker of what was then, and a pointer to what is now in their place: a healthy bias toward grace and acceptance.

I see the acceptance that JP parades, and I know the acceptance I have for him. And it's in moments like these, when he dances unabashedly, I get a powerful glimpse into how God must feel about me.

I cherish the times when JP dances with all his might, because I see the infectious delight in his eyes. I see the overflow of joy through his beaming smile. I, too, am delighted not because he did something for me, or proved his worth. I'm delighted simply because he is my son, and I get to be his father. I now know how God can spend His days thinking thoughts about me without number (Ps. 139:17) as I think about JP.

Because of Jesus, I am considered a child of God, pleasing and acceptable before Him.

So maybe next time JP emerges from the bath, ready to strut his stuff, I'll reconsider simply being a curious onlooker. In the meantime, I'll take inspiration from the choice words of King David, "Oh yes, I'll dance to God's glory — more recklessly even than this. And as far as I'm concerned ... I'll gladly look like a fool" (2 Samuel 6:22 MSG). 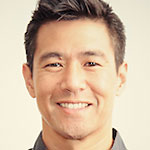 Pete Sung is the pastor of community life at Evergreen Baptist Church of Los Angeles, where he also leads the  lm guild and an intentional community known as the Village. He’s currently focused on creative approaches to outreach, in-reach, and intimacy with God. Learn more about Pete and his family at peteandviv.com.