Slow, Burdensome and For Keeps

MY SON is a lollygagger. Josh doesn't have a problem taking his sweet time getting out of the car, or getting off the toilet. Just the other day, I spent 45 minutes walking back and forth to a closed bathroom door, repeatedly calling, "Josh, is it time to wipe?" After hearing "NO!" for the 15th time, the door finally opened. Josh walked out of the bathroom slowly and gingerly — his legs had fallen asleep. Yes, getting things done can take a very long time with this child.

In moments like these, I'm tempted to scold and urge Josh to go faster. After all, I am a busy mom of three. But usually, at the zenith of my impatience, God gets my attention and humbles me — "Why do you need Josh to become more effective and efficient?"

"Why do you need Josh to become more effective and efficient?"

Josh is autistic and functions at about a 2-year-old's level. Life with Josh is never expeditiously productive; he doesn't think very quickly, and his body doesn't respond very easily. Communication with Josh is like being at a coffee shop with intermittent Wi-Fi.

The truth is, my son was not created to be fast, and he never will be. It's taken nearly 11 years of toilet training to get him to where he is now, and we're just almost done. Almost.

Though Josh may be slow, he dropped into our lives with startling speed.

After a long journey of unsuccessful infertility treatments, my husband and I were so ready to have a child. Only a few months after we had completed our adoption paperwork, our agency called to tell us that a baby boy of Cambodian and Laotian heritage had been born the day before at a hospital in Modesto, California. The birth mother, a young 16-year-old teen, had chosen us to be the baby's adopted parents!

Within hours, we were on a plane to Northern California. Two days later, we were driving home with a 5-pound little brown peanut in a car seat. My bond with this perfect, beautiful child was instantaneous and ferocious. I loved him like I had never imagined loving anyone before.

My bond with this perfect, beautiful child was instantaneous and ferocious.

But soon, my husband and I became concerned. At first, we thought Josh just had difficulty gaining weight. After four weeks, a doctor suggested a blood test, which was followed by three weeks of hospitalization. Finally, our doctor called us in to discuss the MRI of Josh's brain.

I remember the moment vividly — we met in an empty waiting room at Lucile Packard Children's Hospital. Huge, almost obnoxiously bright, multi-colored fish had been painted on the walls. Our pediatrician sat us down on small chairs and broke the news to us: The middle part of Josh's brain known as the septum pellucidum, his optic nerve, and pituitary gland were all vastly underdeveloped.

In that room, I learned that my little bean of a boy was diagnosed with a disorder called Septo-Optic Dysplasia. Given his brain malformation, there was a high possibility that he could be blind, mentally delayed, and have motor difficulties. His low pituitary function meant that he needed to receive a daily dose of shots and pills in order to survive.

Given his brain malformation, there was a high possibility that he could be blind, mentally delayed, and have motor difficulties.

After the meeting, my husband and I stumbled to our car and drove from the hospital to our house in a daze. We lived only a few miles from the hospital, but the drive home seemed like it took a lifetime. As we drove through the campus of Stanford University, reality hit. It was excruciating to watch the busy Stanford students riding their bikes or jogging around. These kids had bright minds and healthy bodies; my son would never lead a life like theirs.

Our social worker listened empathetically as we updated her on the new findings. But her response, though well-meaning, cut deep into my heart: "You can give him back. I know that this is not what you two were prepared for. Technically, you could get back in line to be matched with a different baby."

No. I felt like she was inviting me to push a baby back up my birth canal into my womb and exchange it for a better one.

I felt like she was inviting me to push a baby back up my birth canal into my womb and exchange it for a better one.

My husband felt a little differently. He timidly voiced that he might need some time to pray and be sure that we should keep Josh. He wanted to ensure that we were seeking the Lord in this decision. I recognized this, and knew it made sense to pause and count the costs. We decided to take the time and space that he needed. But internally, I already knew that this was my child and I wasn't giving him back.

It only took a day for the two of us to feel certain that God was extending to us an invitation to parent this particular child. After all, if you give birth to a child with disabilities, you don't have the option to give him back. It's the child that God has given you. And Josh was given to us.

If you give birth to a child with disabilities, you don't have the option to give him back. It's the child that God has given you. And Josh was given to us.

By the end of the first year, we realized that Josh's needs were much more complicated. Josh was diagnosed with autism when he was 3. He also had severe obstructive sleep apnea — he was awake, crying, and screaming for large stretches of the night until he was 5. In order to give him the support he needed, I quit my job as a campus minister and found myself in the role of a full-time mom.

The next few years were filled with lots of changes. We adopted our second child, Hope, three years after Josh was born. Two months after Hope came home, I found myself waking up at least six times in the middle of the night to use the bathroom. I went to the doctor, assuming that I had a bladder infection. It wasn't an infection — I was pregnant. So then came our third, Anna, born three days before Hope's first birthday.

Josh is now 13. His abilities and personality have unfolded over the years. He is not blind, but is visually impaired. Josh can speak in short sentences, but only when it has to do with an immediate desire, such as "I want doughnut." His motor skills are much better than what we expected when he was younger — he can walk and even run!

Josh's purpose in our lives has become clear. Yes, Josh is "differently abled". He doesn't know the alphabet, but he can maneuver an iPad like nobody's business. He can't tell a joke, but he can make the most hardened person smile. And he doesn't know what a Bible is, but he very clearly experiences the pleasure of God. As Josh claps, dances, and flaps his hands when he worships at church, his face reflects the joy of the Lord. He is loved by many, from members in our church, to cheerleaders at his school, to the formerly incarcerated women he met when we volunteered at a fundraiser for victims of human trafficking.

Josh's purpose in our lives has become clear.

Josh's existence is purposeful. He is a reminder for me to slow down and stop for a bit in this busy world. He helps me pause and reconsider my assumptions on what is "normal".

Josh's existence is purposeful. He is a reminder for me to slow down and stop for a bit in this busy world.

The other day, Josh walked out of the house loudly munching on a zucchini like it was an apple. My knee-jerk response was to rebuke him: "No, Josh! We don't eat uncooked zucchinis."

When one of Josh's sisters asked, "Why not, Mom?", I didn't have an answer. Why couldn't he? If my child was happy to eat a vegetable — without my forcing him to — why would I stop him? So I let him continue. I put down my groceries and armful of jackets on the ground, and we sat on the bench in front of my house. I watched as he ate the whole zucchini with great gusto, like it was a sweet peach. Upon finishing, stem and all, he stood with a satisfied and amused look on his face.

As he started clapping and humming, choosing to celebrate that very moment, I felt my spirit begin to quiet. All of the corrections, challenges, and limits that I had in my head were laid to rest for a brief time. As I soaked in this moment of rest and contemplation, I saw that my children were purposely designed and created by God — and that the dreams and expectations I had for them are best placed in the hands of God.

In the words of one of my favorite authors, Henri Nouwen: "In many ways, we are like the busy man who walks up to a precious flower and says, 'What for God's sake are you doing here? Can't you get busy some way?' and then finds himself unable to understand the flower's response: 'I'm sorry, sir, but I am just here to be beautiful.'"

Josh is my flower. He is neither busy or productive, and he never will be. But he was uniquely made by God, and planted in my life for a purpose. And to me, he is absolutely beautiful.

Josh is my flower. He is neither busy or productive, and he never will be. He is absolutely beautiful. 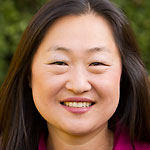 Susan Cho Van Riesen is a mom of three kids and a co-lead pastor at Palo Alto Vineyard Church. She was born in Seoul, Korea, and grew up in Eugene, Oregon. You can read more about her adventures as a parent of a child with special needs at showerheadsandhairdryers.blogspot.com.